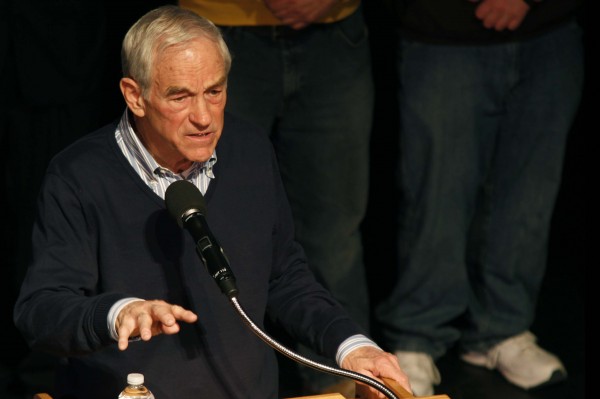 The dry wind whipped across ironically flat Mount Pleasant on Saturday, Feb. 25, and lashed against a line of people bordering Warriner Hall. Reporters from a multitude of press organizations skittered along the line, hoping to get a well-spoken quote or an exceptional personality. Supporters sold his buttons and volunteers held petitions.

They were all waiting to hear one man speak, hoping that they could hear a bit of themselves in him. They’re waiting for Ron Paul, Republican presidential candidate and renowned political figure. He was invited by the Campus Conservatives, led by President Taylor Jackson.

As the minutes ticked by, the seats filled, the mumbles grew louder and supporters became eager. U.S. Representative Justin Amash appeared on stage in Plachta Auditorium before a line of veterans in support of Paul. He encouraged the divergent political stances of Paul and himself.

“We’re changing the fabric of the Republican party,” Amash said. “We’re taking the republic back.”

After the introduction, the man of the hour slowly walked to the podium. Ron Paul is a small man nearing 80 years of age with white hair. However, strangers to Paul would be foolish to mistake his kind eyes for passivity. He is well known not only for straying from popular vote in the House of Representatives, but his insatiable hunger for government transparency, reduced militarism, fiscal conservatism and individual liberty.

“He’s a candidate that I’ve always had my eye on,” Cory Kinne, Central Michigan University student,  said. “He’s interesting because he really speaks his mind. His message of liberty is incredibly powerful to me.”

It seems that Paul’s campaign has recognized the nook there is among college aged voters as they concentrate stops on university campuses. His popularity with a younger demographic is undeniable as the crowd at CMU overflowed into Warriner’s hallways — people were eager just to hear Paul’s voice.

“The younger crowd can see the amount of insecurity in the economic market and the older generation is just afraid to let go of what they’ve been taught,” Herbert Jeremiah, audience member said. “The younger generation is more apt to accept new things and think more radically.”

One of his notions considered radical at the recent Republican debate was the idea of foreign policy with the “golden rule” attached to it. That is, “Do unto others as you would have done to you.”

If Paul, often disregarded by the media as a realistic contender for nomination, did nothing more, he certainly got audience members thinking about the issues at hand. He focused on a recent drastic decrease in individual liberty, referring to the Patriot Act and the newly passed National Defense Authorization Act (NDAA).

“The worst part about this [NDAA] is they can arrest any American for any reason without any charges and deny an attorney with no court and no trial,” Paul said. “This is not what America is supposed to be about.”

Applause roared through the auditorium and audience members rose to their feet.

“Once a government embarks on this notion that they can protect you from yourself, there is no liberty left,” he said.

As he closed his speech, he gently waved to the crowd and walked off stage. Plachta thundered with the claps of Michigan voters. It may have just been an hour of him sharing his beliefs, but it will certainly make an impact in the Republican primaries.