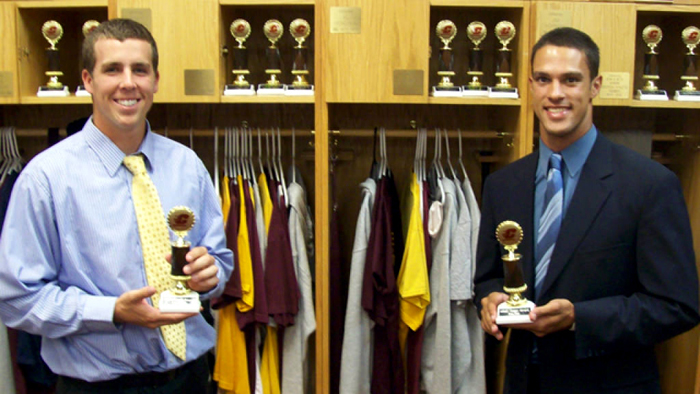 The CHIPY awards recognize the top athlete performers in the past year at Central Michigan University. Eleven different awards will be presented on Sept. 18.

-Coach of the Year

-Comeback Athlete of the Year

-Freshman of the Year

The CHIPYS started as random talk in the outfield between Central baseball players Reid Rooney and Sam Russell. They envisioned an award show that emulates ESPN’s ESPY awards. The CHIPYS include a “Maroon” Carpet prior to the event, the award show itself and even prepared skits throughout the show.

Over a year later and one successful CHIPYS under their belts, Russell and Rooney are now preparing for the second annual show that will take place Sunday, Sept. 18, 2011 at 7 p.m. in the Plachta Auditorium.

Last year’s event featured over 650 guests and raised $2,500 for the V Foundation which supports cancer research, an impressive feat for an event created out of outfield chatter.

Former NFL running back T.J. Duckett will be attending as well as presenting an award at the event. Duckett is a major supporter of the Special Olympics and Rooney said that it will be a “powerful moment” when Duckett presents the award.

The CHIPYS are a black tie event and tickets can be purchased in advance for $3 and at the door for $5. All proceeds go to the V Foundation.

“It’s a cheap way to take a girl or a guy out and to dress up and look snazzy,” Rooney said.

Russell will be hosting the show by himself this year as last year’s co-host Brendan Emmet graduated. More information can be found on the CHIPYS by visiting their Facebook page.