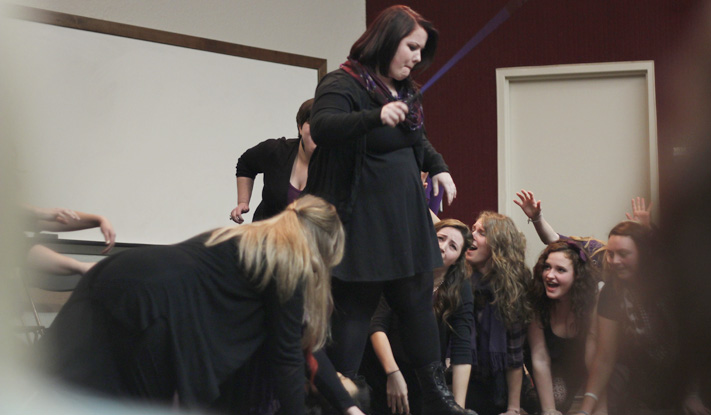 Seats begin to squeak at the first loud call of the word “vagina.” The men in the audience look around to see if they can escape now, or if they’re caught. The Vagina Monologues has begun, and with it has uncomfortable squirming and the too-loud laughter that comes with it.

Vagina. The word is said over a hundred times throughout the performance that was shown Valentine’s weekend on campus. The Vagina Monologues was originally written by the New York City native Eve Ensler. The show premiered in 1996, and since then has been made into a television version that premiered on HBO, it’s been staged internationally, and has been produced annually at Central Michigan.

The performance is a series of monologues that span a variety of topics, and all come back to women’s genitalia.

Some monologues are funny, senior Olivia Deters’ portrayed an elderly Brooklyn woman who was reluctant to talk about her “down there.” Deters’ accent was as hilarious as it was flawless.

Other monologues dealt with serious issues, such as one performed that was the story of a woman who was put through a rape camp.

There were stories of sex, menstruation, female genital mutilation, childbirth and more. All the bases were covered, and done with ease.

“Violence against women is still so prevalent,” Director and Producer, Hannah Mollett said.

The junior hopes to raise awareness to the issue. The production donated all ticket sales to Sexual Aggression Peer Advocates (SAPA) and Eve Ensler’s project to end violence against women and girls: One Billion Rising.

“We’re doing whatever we can to stop that,”  Co-Producer and sophopmore Lexi Achterhof said about violence against women.

The show is striking, it demands the audience’s attention, and raises questions about our own society. The mood shifts in the room throughout the performance, at the beginning the shifts and uncomfortable laughter seem foreign. Hearing all the colorful words used to describe women’s vaginas is the proverbial ice-breaker, and from then on it’s comfortable. Well, for most.

During a particularly well-painted picture of women’s menstruation, men in the crowd mouthed to each other “Oh my god, what are we doing?”

So the target market might not exactly be men, but there’s something for every gender to take from the performance. A heightened sense of understanding about women’s bodies, perhaps. If nothing else, the humor made the show worth it.

Katie Wright, a junior, came with no expectations, “That was different than anything I thought it could be, I was glad I came without any judgements.”