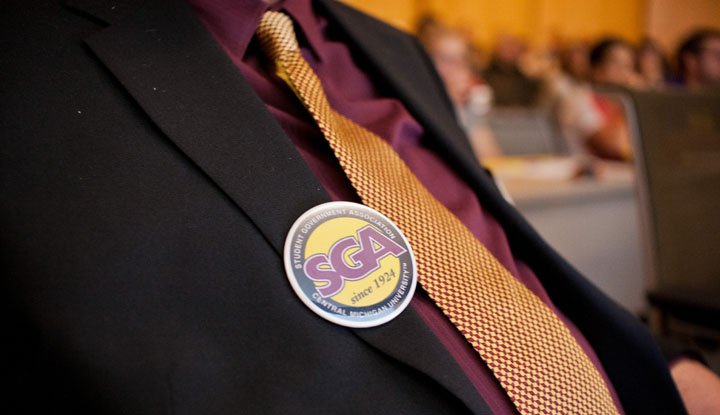 The 89th session of the Student Government Association had a packed audience in the French Auditorium on Monday, as 25 students competed for 15 senate seats.

As the student governors made small talk before the election, Marie Reimers, a junior and SGA president, was excited to see how the association has developed since she became involved as a freshman.

“Last year we only had 15 people in the senate,” Reimers said. “It’s been great to see it grow.”

The voting was done over four rounds that took about two hours. Anxious candidates stood in the front of the crowd and were allowed one minute to speak as well as two questions.

Candidates spoke about issues they would pursue during their time on the senate, including increasing students’ knowledge on their legal rights, building connections with the Mount Pleasant community and helping students with disabilities.

After each group of candidates spoke, representatives and senators thoughtfully voted by clicking who would be best suited for the open positions. After a long election process, the new senators were presented along with the standing senators, allowing the full senate to be recognized.

Mahone said he is excited to start his new role as senate leader. One of his goals this year is to make sure senators have clear goals and the cooperation to achieve them.

“This was the first year that we have had a contentious election,” Mahone said. “Everyone seems really motivated and I am excited to do some great things this year.”

SGA will be meeting every other week opposed to twice a week in previous years. Mahone said meeting twice a week was time consuming but understands why the change was implemented. He was going to have to adapt to this year’s new scheduling, he said.

“It all about me being personable and making sure the senators know that they can come to me for anything,” Mahone said. “Also making sure they have clear guidance on how to move forward.”

Reimers said overall she thinks the first SGA meeting went phenomenally and is excited to have a full senate, describing it as a “dream come true.”

“We haven’t had a full senate like this in two years,” Remiers said. “So many students want to be in SGA this year and I am really positive about what we can accomplish this year.”