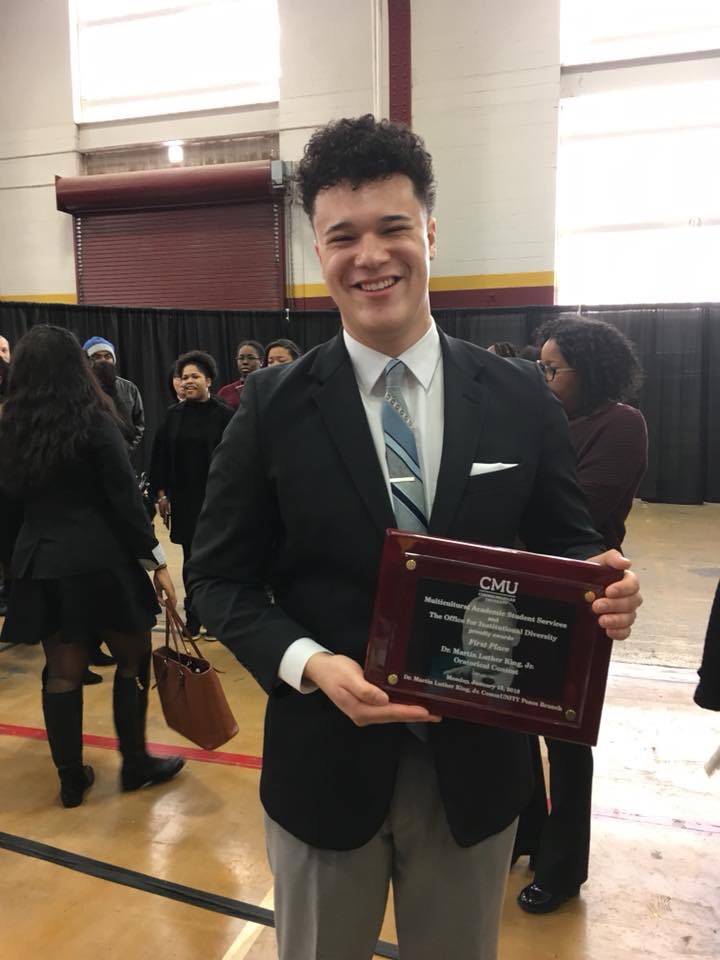 Prior to meeting face-to-face, Port Huron senior Mateo Savedra, ended a Facebook Messenger conversation in thanks after asked about a possible interview regarding his involvement at CMU’s Office of Diversity Education.

“I appreciate you reaching out,” he wrote on Facebook Messenger. Days later, Savedra interviewed and later on received the paid-intern position in the Office of Diversity Education.

Savedra, is studying secondary education. He first heard of the Office of Diversity Education when the professor for his Racism in Dialogue class emailed students about an open internship opportunity. Savedra applied and worked as an intern for one semester before being asked back for the following semester in a paid position.

With a Hungarian, Irish and Mexican background, Savedra describes diversity as his life. He understands the importance of the office due to the value of diversity in an education setting. In terms of the United State’s current political climate, he thinks it’s important to emphasize the importance of difference and acceptance. Savedra’s doing his part to fight for this cause, so the country doesn’t lose what so many before him have worked hard for.

The job itself is all about promoting and enlightening students about diversity on CMU’s campus. He likes the education part of the job, not only because he’s going into education, but also because it gives others an opportunity to learn something they didn’t previously know.

“I think it’s important for students to be exposed to different programs, so they can get a little taste of diversity,” he said. “I’m a firm believer that the more people are exposed to different kinds of experiences, the less afraid they’ll be.” Exposing others to diversity is just what Savedra strives for in the office. Lauren Grotkowski, a 25-year-old graduate student in the Master of Science in Administration program from Auburn, is the Graduate Assistance for the Office of Diversity Education. She has been working closely with Savedra since Aug. 2018. Grotkowski describes her coworker in three words: passionate, driven and wise.

“He’s not afraid to push boundaries in order to create meaningful change,” Grotkowski said. “He has opened my eyes to new perspectives and challenges that I’ve never considered.” The two worked closely on the newer event, “Conversations that Matter.” Grotkowski said Savedra is her number one, go-to coworker whether she needs to bounce ideas off of him, help designing a flyer or simply a friend to talk to.

Grotkowski said, “he dedicates his personal life as well as his work self to promoting diversity. . . he genuinely cares about the assignments he does and puts his heart into his work.” She said his knowledge of current topics in addition to his passion is vital for making an impact on CMU students.

Outside of the office, Savedra continues to promote diversity to those around him. Lansing senior Tyler Graft met Savedra when they were both freshmen in the multicultural advancement scholarship program living on the same floor in Troutman hall. Graft likes that the two can talk about anything and go from joking one moment to a serious conversation all in the matter of seconds.

“Just by hanging out with Mateo, I’ve seen how passionate he is about diversity and equality,” Graft said. “This taught me that change is going to happen and to not give up on that.”

He said that Savedra has even encouraged him to attend various events on campus to learn about people of different races, religions, and educational backgrounds than him.

Whether Savedra is promoting diversity through his job at the office or in his everyday life, he knows that there is still more that he can do. He wants to do what he can to use what he’s learned at CMU to go on to be the kind of teacher that will help his future students get ahead in this world by becoming well-rounded people.

Savedra ended the conversation, again by thanking me, and then by saying he in no way represents any specific community, office, or organization. He said that this is simply how he feels about diversity.

“I truly do believe, the more people can understand each other, we won’t have nearly as many problems as we do now,” Savedra said. “That’s the most important task for America now, to understand one another.”