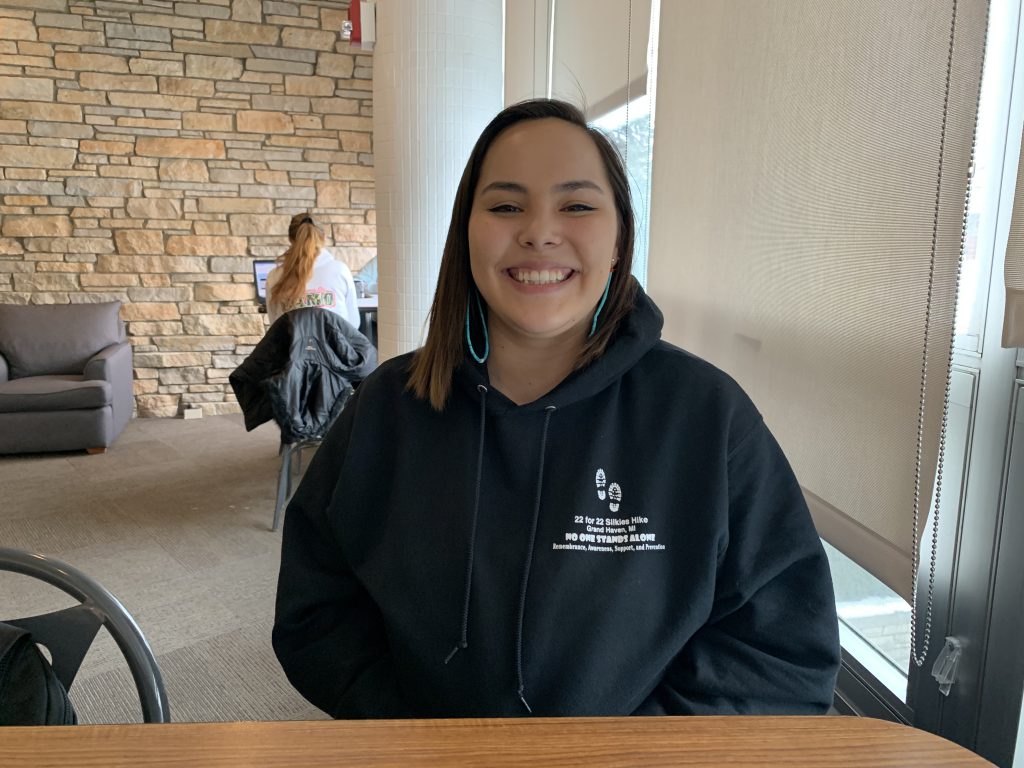 Story and photos by Samantha Cuneo

As she walked around the suburban grounds of Grand Haven, MI, Ayebah Wilson soon realized she will not be speaking Navajo in her new neighborhood.

“What’s up with your hair?” Wilson’s classmates joked as she wore her locks in a traditional style. “It looks like you should be in Star Wars.”

Wilson transitioned to her new school from an Indian reservation in northern Arizona only being able to read and write in Navajo. Being the only Native family in the area, Wilson’s mother did presentations on Native culture to help educate her classmates. The family also bought Rosetta Stone for the Wilson kids to keep up with the language.

As Wilson’s culture began fading away in her new neighborhood, her grip on her roots became stronger. Wilson headed into college at Central Michigan University and immediately involving herself in the Native American programs on campus.

“It keeps me closer to my culture by being surrounded by people who share similar backgrounds,” said Wilson. “I love to be involved. It’s a lot of work, but it keeps me connected.”

Wilson is co-chair of the Pow Wow Committee at CMU. Her team is currently gearing up for the 30th Annual Celebrating Life Pow Wow hosted in the McGuirk Arena March 23-24.

Wilson’s main role is to help conduct meetings held by the Pow Wow Committee. The entire committee is involved in contributing to planning— from contacting the judges to passing out t-shirts during the event.

“Each member plays a huge role in pulling it all together,” Wilson said. “We are pretty relaxed on who does what as long as it gets done on time and is of great quality.”

The CMU Pow Wow hosts hundreds of tribes and visitors each year. Various competition dances are performed by men, women and children, lead by a drum group called “Dusty Bear.” Vendors also sell jewelry and food throughout the weekend.

“The Pow Wow is a huge part of CMU,” Wilson said. “Not many people are even aware of an Indian reservation being just down the road. This university is surrounded by native grounds, so attending is not only necessary but just a ton of fun.”