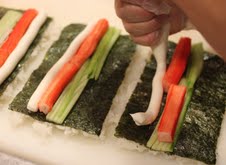 Trying new things can be hard and even impossible for some, but missing out on the collection of sushi that Central Michigan University has to offer should be a crime.

Every college student comes to school for the chance to create new experiences. For some students this could even include trying new and exotic foods like sushi.

CMU provides students with meals and dishes that most students have not tried, but one of the most popular selections is the sushi that is conveniently found in the campus stores and in the Down Under restaurant.

“I believe that the sushi does an alright job at giving you a fresh taste of a new dish you have not tried, however the sushi does not stand up to the sushi restaurant in Holt,” Holt sophomore Allison Kent said.

Though many students have already had the opportunity to try sushi, some used the campus as a gateway to experience theses dishes firsthand.

“I love the sushi on campus,” he said. “It’s convenient and whenever I get a chance I always like to chow down on some scrumptious Dragon Rolls.”

Students agreed that the Down Under provides the best variety of fresh sushi, but don’t just take their word for it. Try the sushi for yourself — gather up your friends, bring your flex dollars, and hit up the C3, the Market or the Down Under Food Court for a tasty treat.