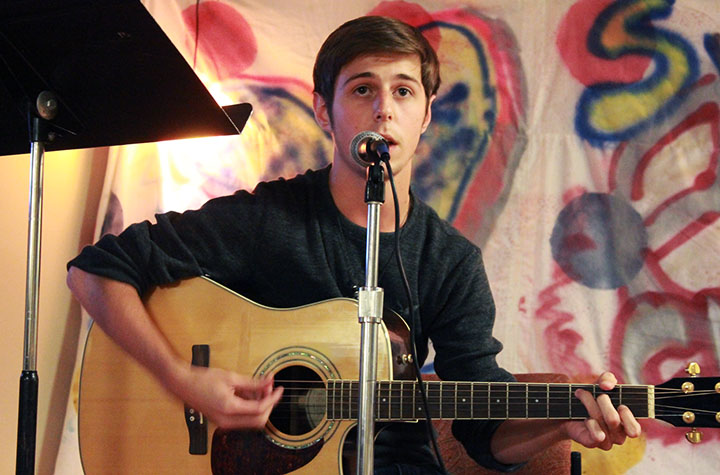 The entire lobby was filled with people, some even sitting on the floor, as residents from Sweeney, Thorpe, Merrill and Beddow halls listened to brave singers perform in Sweeney Hall’s fall open mic night Thursday.

The event was hosted by Jack Wuerfel and Beth Cundy, both resident assistants in the hall. There were 13 different acts, each one with a unique talent ranging from singing to reading poetry.

“It gives students the opportunity to freely express themselves,” Cundy said. “It’s a great time for the performers and for the audience.”

The open mic night was different this year, as each act had their own jars that the audience members could contribute to.  The audience donated money to their favorite acts, with the donations going to the Art Outreach Center in Mount Pleasant.

“We wanted to use art to benefit art in our community,” Cundy said.

The night started off with Bock, a Sweeney staff band featuring Wuerfel and Resident Hall Director William Parker. The duo brought up two other Sweeney resident assistants, Libby Siecinski and Andy Doto. They performed a cover of “Home” by Edward Sharpe and the Magnetic Zeros.

One student chose to give the audience a taste of their songwriting skills and played original songs.

Most chose to showoff their vocal skills by doing covers of songs that matched their vocal range.

Courtney, a resident of Sweeney, covered Miley Cyrus’ “The Climb”, allowing the audience to experience her wide vocal range.

Jacob brought his own guitar and did two different covers from popular artists; “Little Lion Man” by Mumford and Sons and “People Are Crazy” by Billy Currington.

Wuerfel also sang a couple covers, one by Michael Bublé and his second, a Bob Dylan song, “It Ain’t Me Babe.”

Several students read moving poems that they wrote, touching on the pains and hardships endured in life.

Sadina Sackett performed her poem “One Big Bruise,” which looks back on rough times she had in high school. While Sam Dennis, a slam poet at Central, performed three poems.

Dennis’ second poem “Listen” touched on self harm and depression. Her third poem “Cigarettes” compared the addiction of smoking to a bad relationship.

The mood was lightened by comedic acts given between each performance.

Billy Trahan got the audience to their feet dancing “Hoedown Throwdown,” and Cundy read a hilarious passage from a book that she is currently reading.

The night brought everyone together and it allowed residents to see their peers’ talent. Open mic nights show and highlight unknown talents or create an opportunity for people to breakout of their shells and try new things.

“I think it truly benefits students because it allows them to share their passions or life experiences,” Cundy said. “Especially through poetry and singing.”

These entertaining events are a way for students to make a name for themselves and Sweeney helped them do just that.

“I’m always amazed by the talent that comes out only once a semester!” Cundy said.

A video of the first act.