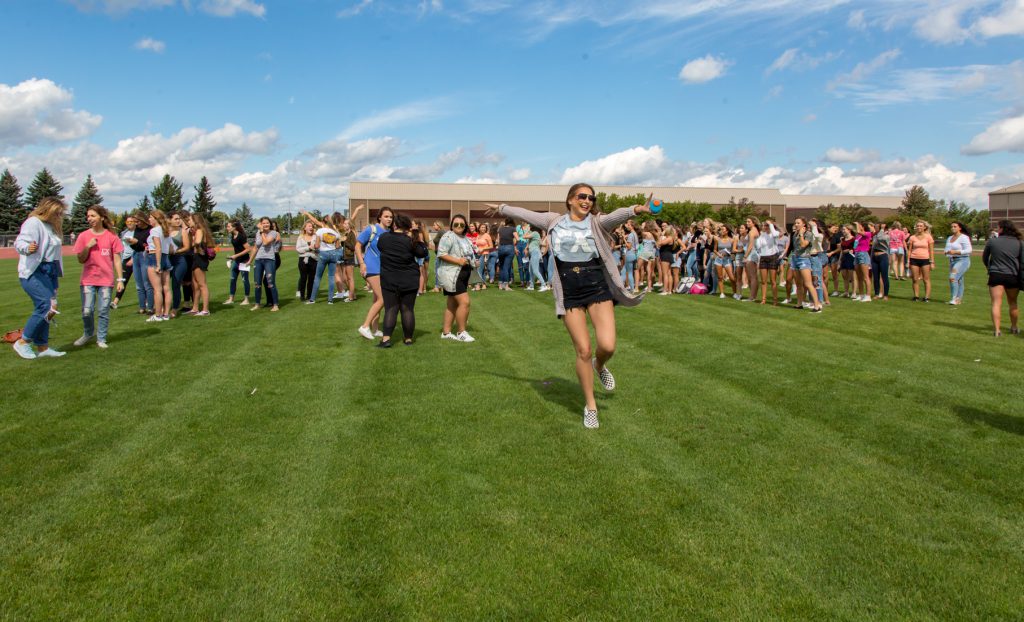 Story and photos by Xavier Mendoza

Once a semester, potential new members (PNMs) go through sorority recruitment to try and get their bid from their prospective chapter. Many people see the surface level of these events through social media, an organization’s page and recruitment videos. PNMs and other spectators see the happiness, quirkiness and character of current sisters of each chapter— but for this system to do well, there’s always a group of people that have to lead the event from start to finish. They have a collective goal for the events to go as smoothly as possible. For recruitment, these leaders are called Gamma Chis.

A Gamma Chi is a sorority member from a Panhellenic chapter that willfully disaffiliates from their letters to facilitate the ins-and-outs of recruitment.

Senior Josephine Krzesak was this year’s Vice President of Recruitment (VPR) for the Panhellenic Council. She said it was an eye opening experience to oversee the VPR’s of each chapter.

“I was my chapter’s VPR last year so I kind of knew what I had to do,” Krzesak said. “I didn’t realize all the titles and job descriptions I had to be doing, but it was really fun.”

Throughout the process, Gamma Chis become neutral resources for the potential new members. They help facilitate meetings and talks as well as answer questions and give PNMs advice about recruitment.

Senior Becca Kerry was a Gamma Chi recruitment councilor. She said she helped nine PNMs throughout the process.

“It was really rewarding to see our group grow throughout the week and help them make their decisions and help them through the process that could have been difficult to do on their own,” Kerry said. “It was incredibly rewarding to be able to disaffiliate from my chapter for that time, and then be able to have an experience that I would not have had other wise. Then, be able to jump back in to my chapter, knowing that I helped those girls through recruitment to find their homes.”

Kerry said one of the hardest parts of the experience was knowing that a PNM in her group wouldn’t get their preferred chapter and that it could result with that person dropping out of the process.

“It was really difficult to see the girls in my group get backed by their bottom chapter that they may have dropped the day before and be dropped by their top chapter,” Kerry said. “Then, having the conversation that it isn’t anything personal or have anything against them. It’s just kind of how the system works and encouraging them to continue the process.”

With such a big event, the Gamma Chis said they leaned on each other for support throughout their time together.

Krzesak said due to her position, she was able to make connections with members from other chapters, that she might not have been able to form without it.

“Our paths would have never crossed, but because we were Gamma Chis, we were able to hang out every few times a week doing workshops. I made a lot of close bonds with them,” she said.

Kerry said before the experience, she didn’t think she would get as close to her fellow Gamma Chis.

“All the girls that formed the, ‘Gamma Chi Chapter,’ per-say, came from different sororities and we didn’t know each other that well,” she said. “By the end of it, we were almost sad to jump home because that means we wouldn’t all be in the same ‘chapter’ anymore.”

Similar to other organizations and their executive boards, those who have experienced being a Gamma Chi before have the option of returning for the experience again.

Kayla Garza was the Executive Vice President of the Panhellenic Council. This was her second year with the position.

“It was definitely less nerve-racking than the year before because this time I knew what was expected of me and what I could expect of my PNMs coming in,” Garza said. “It was nice because I get to help out with not only the new members coming in but also I got to help other Gamma Chis. I would help make sure everyone was comfortable with the process whether it would be a PNM, another Gamma Chi or and active member of the community.”

She said experiencing this position again is rewarding because it teaches the Gamma Chi to take a step back and to help the community grow.

“Putting your life kind of on hold to make sure that other people can have an amazing experience that I had throughout my years,” Garza said. “I’ve had just an amazing time being a part of my sorority for the past nine semesters. I really hope these incoming PNMs can find their forever home, too.”

Garza said as a returner, something she wished she knew about during her first year was relying on her fellow Gamma Chis.

“Last year, I didn’t know who to ask for what, and I wasn’t super comfortable with anyone. Back then, I went through, made friends, then jumped home,” Garza said. “This year, I really had a support system with the Gamma Chis. Everyone is going through the same thing. It’s ok to be emotional, lean on others to support, ask for help when needed and it’s also encouraged to reach out to others when they don’t have something to hold on to.”

Garza said for women interested in this position, if you’re willing to get out of your comfort zone, this is definitely the opportunity for it. “Also, be willing to give up your letters. You have to step back and let your chapter be fine without you. Also, really dive in to the Gamma Chi experience, go to every workshop possible because there’s always something else you’ll learn, it doesn’t matter how long you’ve been a Gamma Chi,” Garza said.

Gamma Chis recently jumped home after Bid Day. New Gamma Chis will be chosen at the end of this semester. They train throughout the Spring semester and daily during the fall.