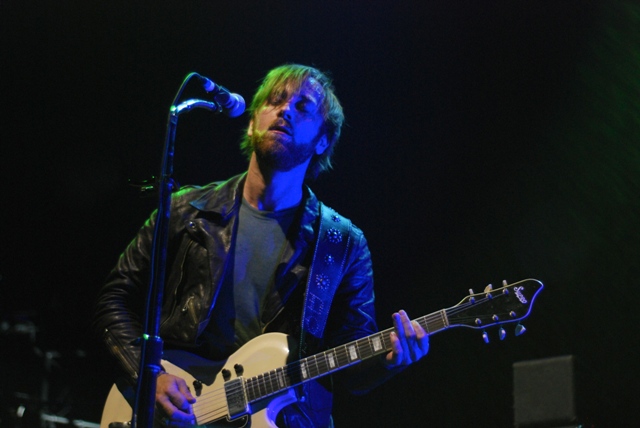 Nearly 9,000 fans crowded Van Andel Arena in Grand Rapids on Sunday night for a band that in the last few years has reached commercial success — The Black Keys.

Accustomed to playing in small venues, lead singer and guitarist Dan Auerbach and drummer Patrick Carney certainly looked comfortable with their surroundings. Even though this is the first headlining arena tour of its career, The Black Keys have been a group since 2001.

British act Arctic Monkeys joined The Black Keys for this tour around North America. They opened the concert with an hour-long set of 16 songs that kept the crowd entertained. Lead singer and guitarist Alex Turner and drummer Matt Helders electrified the fans with their fast paced and lyrically amusing songs. Pleasuring their followers, “R U Mine?” was the band’s closing number, a song just released on Feb. 26 after Turner said in a late 2011 interview that the band was taking a break from recording.

The rhythm and tone of The Black Keys’ 18-song set-list, plus three encore songs, left the entire crowd jumping with enthusiasm. Auerbach’s lyrics, which can easily be described as soulful, were amplified by the sound system in the hockey arena enough that no matter where one was seated, the vocals sounded perfect. The passion that Carney portrayed through his memorably wild and eccentric drumming resonated with the crowd. Fans were screaming, jumping, fist pumping and dancing more than singing along to the lyrics. The last song in the set-list, “Lonely Boy,” had everyone in the arena on their feet, its exciting vibe propelling the crowd to dance along like the man in the music video.

Bassist Gus Seyffert and keyboardist and guitarist John Wood joined Auerbach and Carney for their big arena tour in which the group moved from song to song quickly. The set-list contained mainly songs from their sixth and seventh albums Brothers and El Camino. The Grammy Award-winning song “Tighten Up” was joined by a terrific light show. The lights flashed toward fans along with the strong beats, while monitors behind the stage alternated from grainy and dusty photos of country settings to live video of the two band members themselves projecting toward the crowd.

The Black Keys music doesn’t sound much like the rest of the big name artists of the modern day and age. The concert was a refreshing performance by a small-town Ohio band that finally hit it big. It left ears ringing, hearts pumping and voices trembling.