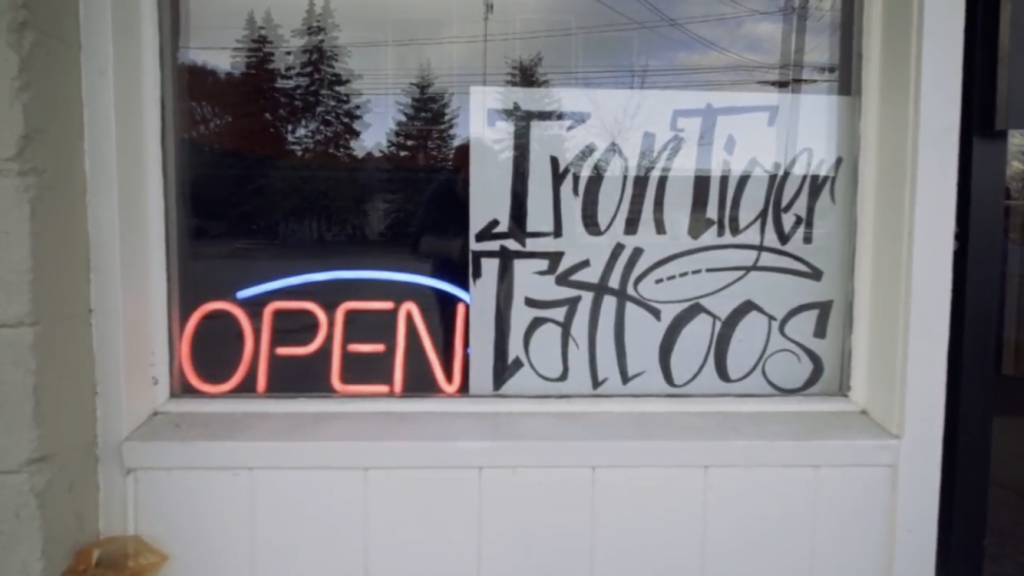 Tucked away in a plaza right off of North Mission, between East Chippewa St. and East Lincoln St. is Iron Tiger Tattoos. Check out owner Bryan Briggs in his domain, doing what he loves in the video above.

Not many tattoo artists seem to radiate the love and excitement Briggs has about his shop, which he hadn’t expected to open so soon. Upon arriving in Mount Pleasant, the opportunity arose. With this in mind he decided to “get it while the gettin’s good.” 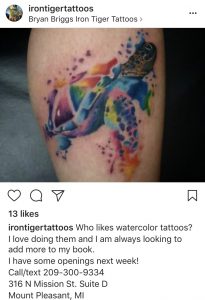 (which, today, are the most common cover-up tattoos he does). Briggs actually prefers to do cover-ups because he gets the chance “to change somebody’s life.”

He said his style is a little bit of everything. Originally from the fast paced west coast, Briggs is used to doing “anything that walks in.” He learned how to do everything from Japanese and traditional American tattoos to black and gray portraits from a place called Red Dragon Tattoos.

” [My] favorite thing is when somebody comes in with two or three different ideas and we mix ‘em together and we kinda do our own thing,” Briggs said.

What he wants people to take away from the experience in his shop is that they are getting a quality tattoo from someone who cares.

By setting the prices of tattoos based on the detail rather than the time it takes, he wants his clients to rest assured knowing that he won’t “drag his feet” and try to take as long as he can to do the tattoo. He prefers to set a price upfront so customers are really happy for something he took his time on.

Today's cover up. I am doing stuff like this for great prices because the feeling my clients get from this kind of transformation is priceless. I want to erase that old mistake tattoo like the ex's name or the one you got at that house party so call/text me and I'll give you a free quote! 2093009334 316 N Mission St. Suite D

Briggs believes tattoos are the ultimate form of expression.

“[It’s] everyone’s way of wearing what they are on the inside on the outside,” he said.

Like father like son. One day I will hand my boy an empire that I gave blood sweat and tears for. It's all for you little dude! #tattooartist #bryanbriggs #IronTigerTattoos #mountpleasant #Michigan #tattooeddad #futureapprentice

With plans to franchise the shop and bring the experience to more people in the future, Briggs finds Mount Pleasant to be the perfect spot right now.