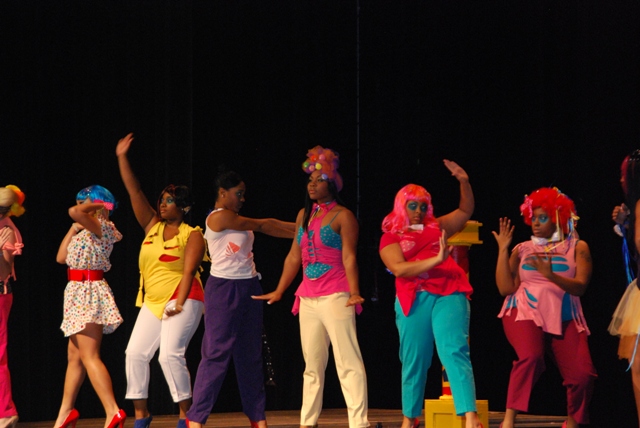 On Friday, Feb. 14, Cirque de Vogue invaded Central Michigan University with awe, shock and style. The Organization of Black Unity hosted its 12th annual fashion show performing to a near-capacity crowd in the Plachta Auditorium in Warriner Hall on campus. The show began at 7 p.m.

This year the theme for the fashion show was Cirque de Vogue. Show model Theron Cheatham said the concept was developed by their model coach Chris Collier.

“Chris Collier came up with and developed the idea after watching Cirque de Soleil. All the scene titles came from the different acts,” Cheatham said.

“God, it has been a really long time. We basically start at the beginning of the fall semester. From there we practiced every Sunday for three hours and twice during the week for two hours,” he said.

Approximately 100 people volunteered their time and hard work to compose all different aspects of the show.

“There were models, people who built the set, people who donated or made clothes, controlled the music and lights, etc. There was a lot of time and man power put into this,” Cheatham said.

Many members of the audience were friends or family of the performers and had attended the venue to show their support. Andy Carmichael said this is the second show he’s been to for a friend.

“I went to the fashion show last year too for one of my friends who was one of the models. He was modeling again this year so I decided to come out again. I liked this year’s show even more than last year,” Carmichael said.

The theme was distinctly noticeable during each portion of the show with small sideshow introduction acts — complete with a ring leader and jester. The energy of the models and acts filled the audience and carried all the way through the performance. Each scene was clearly distinguishable and unique from the last.

“One of the most important aspects of these shows is the effect it has on the models and other members of the show’s production, Cheatham said.

“The fashion show is awesome; it’s great for making people more comfortable and confident with themselves. It makes you feel confident.”