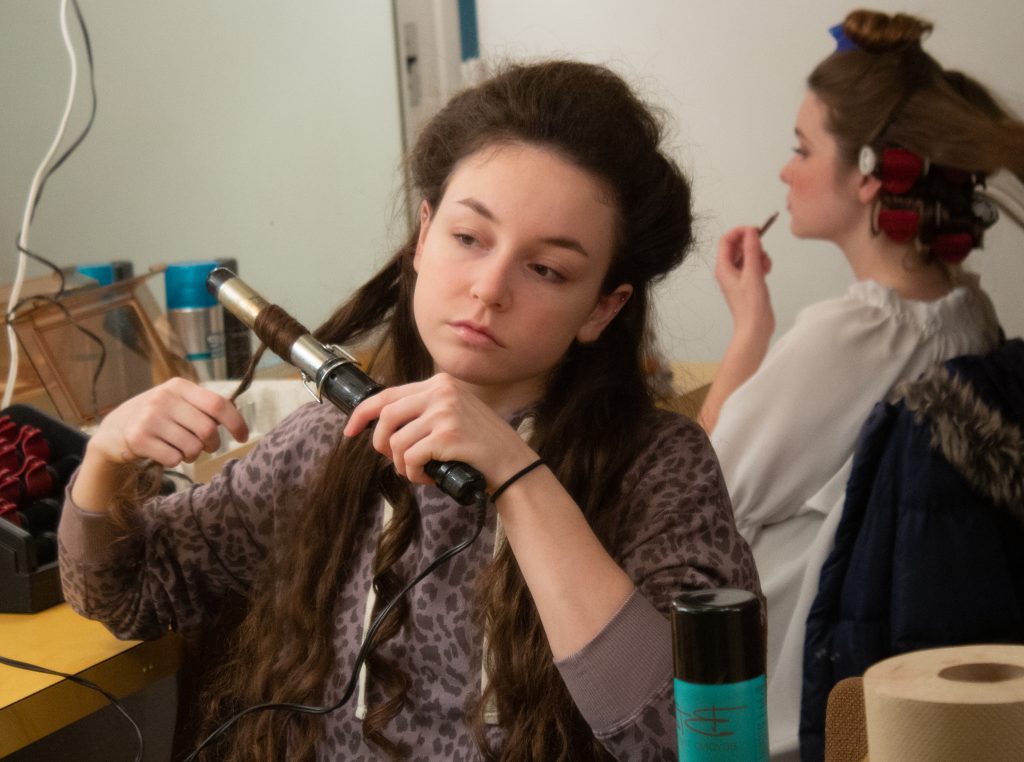 When people think of the French Revolution they may think of Versailles and the guillotine. However, CMU’s current production of “The Revolutionists” may change that point of view by introducing four strong women of the Revolution, that aren’t always taught in history class.

“It’s about four women in the French Revolution who each have something worth fighting for,” said Olivia Randall, a senior acting major. “They come together to create a story about women’s rights and sisterhood.”

“The Revolutionists” is about three real women and one composite character— Olympe de Gouge, Charlotte Corday, Marie Antoinette and Marianne Angelle — living in the French Revolution. This comedy is about, “violence and legacy, art and activism, feminism and terrorism, compatriots and chosen sisters, and how we actually go about changing the world,” said Lauren Gunderson, the award-winning playwright of this show, on her website.

Randall plays Olympe de Gouge, a playwright and political activist. In real life, de Gouge wrote about abolitionism and women’s rights, including the right for women to get divorced, own property, resist oppression and more. 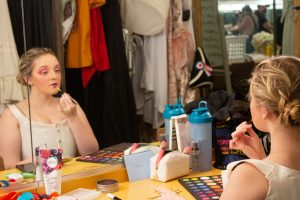 “She’s a theater nerd,” Randall said. “She spends the play trying to write a play of her own and she’s so enthusiastic about it, but almost to a fault. That’s all she’s concerned about, and she doesn’t really take the other girl’s feelings into consideration sometimes. She’s just very passionate about fighting for women’s rights that she blinds herself to anything else going on.”

Randall began acting in elementary school because her older sister did, but soon learned it gave her a rush, like an adrenaline junkie, she said. One of her most memorable experiences in acting was while she was bowing on opening night after her first show at CMU.

“It just kind of hit me like, ‘Yeah, I’m doing this, this is what I want to do with my life,’” Randall said.

Darby Johnson, a CMU acting alumni, plays Marie Antoinette, the wife of King Louis XVI who was convicted of treason and beheaded by French revolutionists in 1793. Better known for her high-spending habits and the rumor that she told starving French peasants to “eat cake,” this play shows Antoinette in a more relatable light, Johnson said.

“At first, she’s seen as quite the absorbed character,” she said. “But as time grows in the show, you find yourself starting to understand and relate to her… She is quite funny and a strong woman.”

Johnson has been acting since she was young, with her most memorable moment being a 2011 Broadway tour of “The Wizard of Oz” in Billings, Montana.

“It was in that moment I got to work with professionals and see what it was to be a performer and I loved every second of it,” she said. “I realized what I was made to do: story tell.” 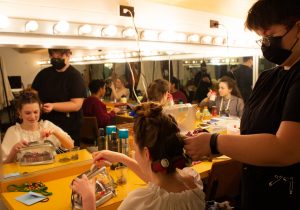 The other main characters in the play are portrayed by junior Zandalee Henderson and sophomore Lindsay Fleck.

Hendersen plays Marianne Angelle, a black woman from San Domingue who represents a combination of real revolutionary women fighting for the freedom of slaves in the Caribbean.

Fleck portrays Charlotte Corday, who is best known in real life for assassinating Jean-Paul Marat, a leader of the French Revolution.

Overall, the play is about four strong women fighting for their lives and freedom. However, it also has something to say about the modern world, through its relatability and comments on women’s rights.

“In four women, everyone will find an aspect to relate to each one,” Johnson said. “Be upset by each one. They will laugh, cry, boo, and cheer throughout the play. And hopefully learn some history.”

The play shows the importance of women’s rights and how long they’ve been fighting for them, Randall said.

“I think it shows that women are strong and powerful and deserve respect,” Randall said. “It shows women supporting women, which is great because sometimes women don’t support other women.

“It shows that change can be made without violence and that there can be big change through words and through meaningful connections.”