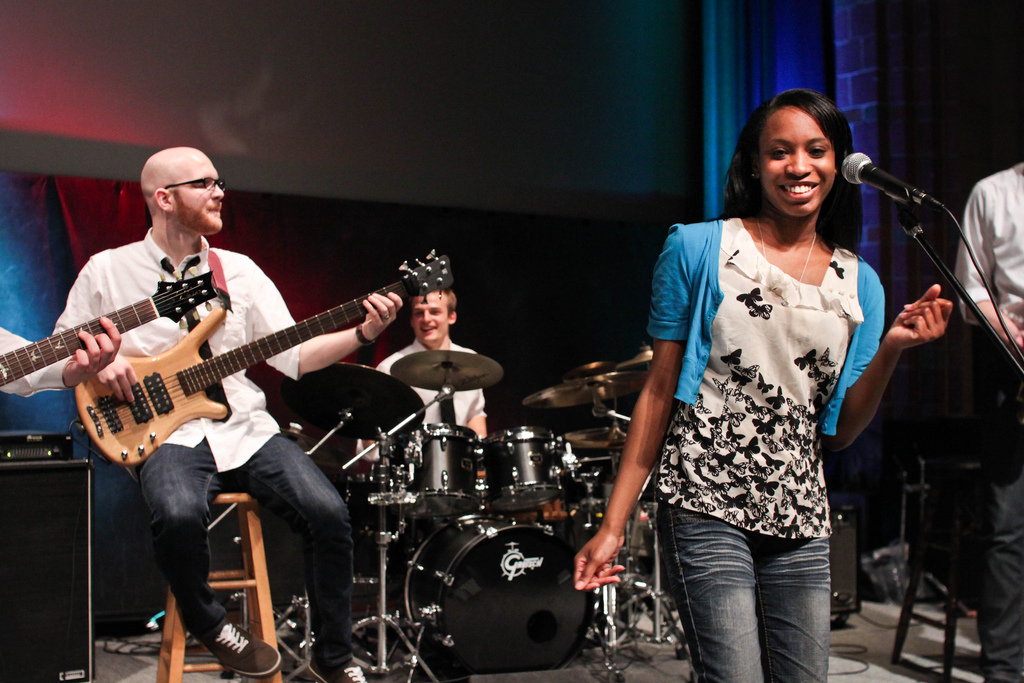 Splice is hard to define. The unique CMU-based band spans genres ranging from gospel to hip-hop and rock to classical, and will be releasing their debut album, “Take Time” on April 20 at the Ward Theater in downtown Mount Pleasant.

“We have done all the work,” Traverse City senior Andy Wheelock said. “We did the album cover, promotions, concert design, wrote all the lyrics for the music. We have done everything.”

All of the members have spent several late nights and most of spring break recording “Take Time,” according to E’lon although she admitted it felt more like jamming out with friends than work.

“When we get together it is the most supportive, caring and creative place,” she said. “We just have a lot of fun and there is no tension with anyone in the group ever. We start rehearsals with hugs because if you have any stress throughout the day, starting out with a hug makes it hard for you to get mad with each other.”

Originally named Between Interventions in an attempt to describe how the members often feel as if they are in limbo in their lives, they eventually decided to choose a shorter name. The new choice represents the melting pot of genres their sound has become.

“We are splicing different music together to create our own sound,” Wheelock said.

However, Wheelock admits audiences may think of two things upon hearing the name Splice:  a horror movie or splicing a cable together.

Each member of Splice has a different musical background and, consequently, the band has a hard time describing their style. Their various musical roots include everything from hip-hop, gospel, jazz, classic rock, soul, reggae, classical and pop music.

Self-categorized as soul-fusion, the unsigned band attempts to melt a handful of very different genres into one composition. But even with a unique, all encompassing phrase, some elements of the band still remain undefined.

“Even the phrase ‘soul-fusion’ is limiting because Ethan will come and do an awesome rock solo and that doesn’t have anything to do with soul or fusion,” Wheelock said.

However, despite the various styles of each member, the group as a whole collaborates well on its new tracks.  “Take Time” will be available April 20 on hard copy for 10 dollars or digitally on iTunes, Spotify and Amazon.

On the day of the album’s launch, Splice will play original songs as well as covers by artists like John Legend, Stevie Wonder and Beyonce.  CMU a cappella group Fish ‘n Chips is also scheduled to warm up for them.

Amongst the excitement of the debut album, the group with a sound so difficult to define attempts to dilute the fog of the future.

“It is hard to say where Splice will go because you don’t want to be too ambitious or too limiting,” Wheelock said.

To trumpeter Hakoyama, the ambition and dedication of Splice’s members has made this achievement sensational.

“We splice every person’s background, so without everyone it wouldn’t be possible,” he said. “Especially on this album everyone brought something to the table.”