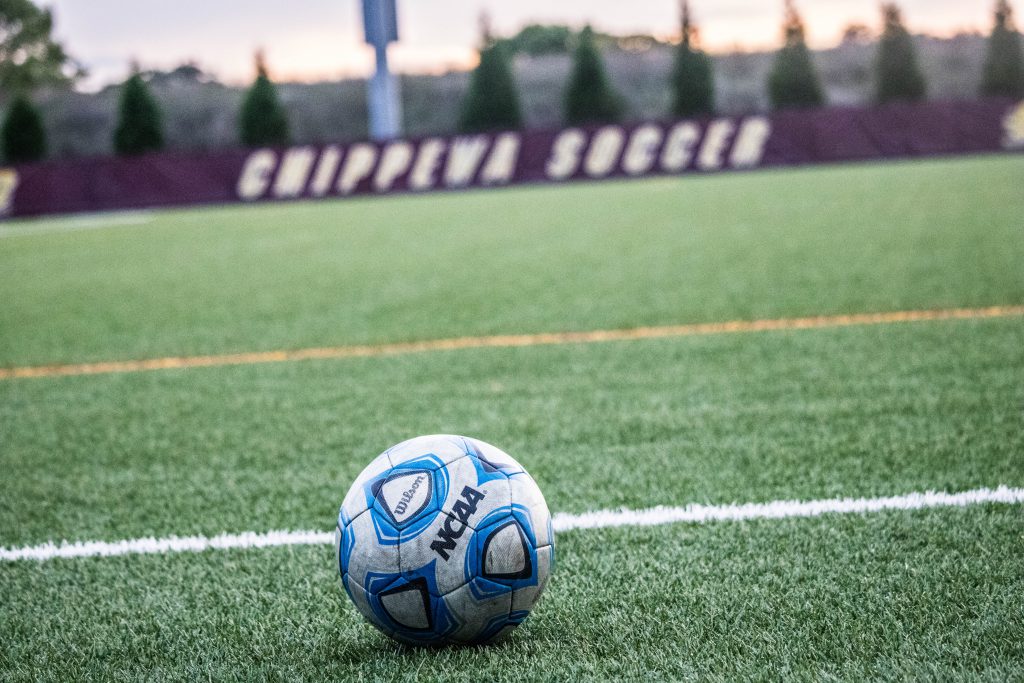 Story and Photos by Davaris Collier

Central Michigan University athletics is home to McGuirk Arena, Theunissen Stadium and Kelly Shorts Stadium. Each house at least one of the many sports that CMU participates in; such as basketball, volleyball, gymnastics, football, lacrosse, baseball and women’s soccer. However, there is one sport that is currently left out of the official listing— men’s soccer.

Despite lackluster efforts to start an official men’s soccer team on the university’s end, students have found a way to continue indulging in the sport by creating their own club soccer team. Club soccer is comprised of roughly 23 men who play 10 games a season.

To set up games for the season, club teams have a once-a-year meeting with presidents from other school clubs at Purdue University.

One member of the Men’s Club Soccer team is junior Isaac Dieterle.

“When the time of graduating high school came around, I knew that I had to find a school that I could continue my soccer career at. When I visited Central Michigan University I fell in love with it,” Dieterle said. “I loved the campus size, the programs they offer and the overall pride that comes with being a Chippewa.”

“All of these things were great, but then I realized CMU didn’t have a men’s varsity soccer program. After doing some research I found that although there was no varsity program, there was a club team,” he said. “I had no idea what the level of play would be like or how successful the team was when I showed up to the first day of tryouts. I found that this team was in a very competitive league and had amazing potential to be something great.”

Dieterle is in his third season with the Men’s Club Soccer team as the Vice President and co-captain of the club.

“The culture has completely changed from my first season. We have rebranded ourselves from being a team that just wanted the chance to continue to play, to a program that is hungry for consistent success. Although we are in the very early stages, with our new coach and a new mentality, we hope to lay the foundation for this program to continue to succeed and become a varsity program,” Dieterle said. “Our goal as leaders and upperclassmen of the program is to plant the seeds now so that future generations can sit in the shade. We hope that our hard work and determination to shift the culture of this program now will start a domino effect that ultimately results in a school sponsored varsity program in the future. I’m proud of what this program is and can’t wait to see what the future holds… Fire Up Chips!”

Unfortunately, the Men’s Soccer Club does not receive any sort of funding  from CMU despite its constant outpour of money into other athletic programs. But the team’s coach, CMU alumnus Fede Vallazza, has worked hard to re-define the word “official” in regards to Men’s Cub Soccer.

“I demand that the players on my team work just as hard on the field and in the classroom as Coach Bonamego does with his players. Do we represent Central Michigan University every weekend when we step onto that field? Yes. Do we compete against other schools at a regional and national level? Yes,” Vallazza said. “Are we playing at the most competitive level that CMU has to offer? Yes. Are the students held to an academic eligibility standard in order to play games? Yes. Is this a ‘varsity’ program that receives direct funding from the school’s athletics department? No.”

The Men’s Club Soccer team is solely funded by its members. With that freedom, Vallazza says, the students within the organization have the ability to choose whatever they want the organization to be— but the University’s recreation department does reimburse the club a percentage of the expenses at the end of the season.