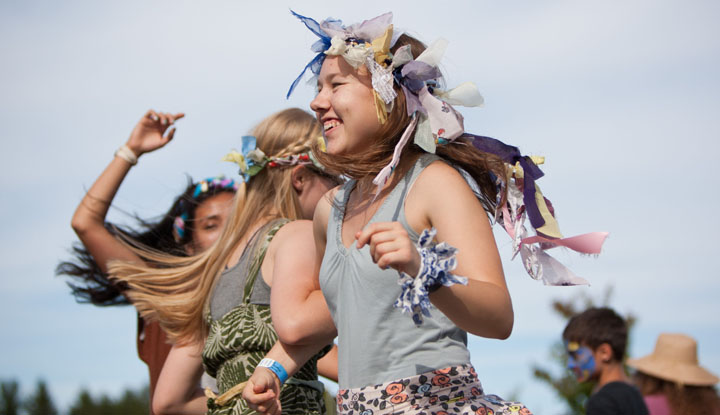 Most Monday mornings after a festival weekend are comparable to rising from the grave. Maybe even crawling out of a muddy hole. It sort of feels like being hit by a fun bus.

The Wheatland Music Festival—held annually in Remus, Mich.—was different. Monday morning was rough, yes, but rather than extreme exhaustion and sadness, I felt full. Rejuvenated, if you will. Wheatland is a transition to colder weather, chock full of festi-vibes, but softer. If other festivals are visiting your wild cousins for a few days, Wheatland is like hanging out with your cool aunt and uncle that like to get down but also really just want to hang out.

It is nowhere near as intense as the electrified summer festival blowouts that have overtaken the general population, and that’s a good thing. It hosts just as much (if not more) talent, it’s more intimate, it’s less crowded and much more relaxed.

As far as music, the array of talent blew me away. Among the highlights were: The Duhks, Béla Fleck and Abigail Washburn, La Bouttine Souriante, The Revelers, The Appleseed Collective and Steppin In It.

A quick explanation of each: The Duhks are from Canada, and I didn’t even hear them apologize once. It was amazing, and so was their music. They incorporated a lot of different styles into one really mind-blowing performance. The percussion was one beat away from sounding Latin, but they kept it fairly traditional with Americana sounds alongside the beautiful vocals of Jessee Havey and Tania Elizabeth’s amazing fiddle.

Béla Fleck and his wife Abigail Washburn took the stage with what was the most impressive performance of banjo-playing that I have ever heard. Fleck produces music that doesn’t seem possible with one instrument. Sounds toppled over one another with absolute precision. His wife was equally talented, and her playful banter between songs was enjoyable.

La Bouttine Souriante filled up the stage. The band itself is huge, and the music they make is even bigger. Their performances were full of energy and the dancer that accompanied them packed such a punch that it was hard to look away from her. Who knew Quebec had such spunk?

I love the Cajun dance. For those who have the misfortune of never partaking, it is a organized shuffle in a oval shape. You get sweaty, you can’t stop smiling, and you can’t stop shuffling. It is my absolute favorite part of the weekend, and The Revelers added the right spice to keep everyone moving.

I’ve been a fan of The Appleseed Collective for a while and was really excited to see them again. They didn’t disappoint. Their weird style caused a stir, as did the sauerkraut they were selling. The gypsy, folksy bluegrass ensemble will be playing Midwest Fest Thursday, Sept. 26 at Hunter’s Ale House.

Lastly, Steppin In It exploded onto the stage with more fervor and funk than I was expecting. They stuffed the tent they played under with hundreds of people and a jazzy vibe that everyone seemed to love.

The music helped contribute to the sense of community and the family vibe that is present the whole weekend. Strangers seem nicer, and calls of ‘Happy Wheatland’ are heard once or twice an hour, minimum. People are just happy. There’s no reason or need to be condescending or in a bad mood, so no one is.

Whereas other festivals bring you up for four days, and send you crashing down, Wheatland gets you up on a plateau. We left ready for fall, satisfied and a little shaken. There isn’t the strong sense of longing to go back; only a content fullness and a growing anticipation for next year.