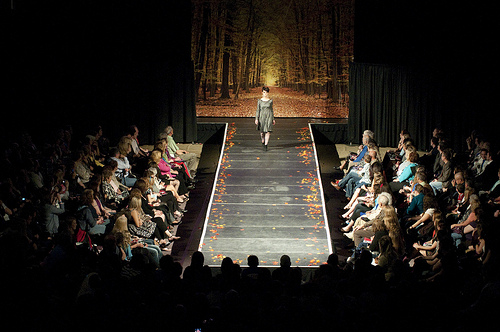 The 13th annual production of THREADS was held on Saturday, and the show was a sensation.

THREADS is a fashion show completely organized by students who are a part of the Fashion Production and Promotion class and members of the Fashion Association of Merchandising and Design.

The show allows the students who are a part of AMD to give the audience an idea about what the AMD classes are about and demonstrates what the students have been working on all year.

The audience this year was a great turn out. Many families of the students were there along with friends, and many other students from Central Michigan University.

The show was divided up into categories starting with the spring and summer collections and concluded the show with the fall and winter collections. The show had a total of 32 designers, all of who were very talented and have an expertise at designing and creating clothes.

All of the designers were very creative and each designer had a wide range of individually and style. They all also had some sort of inspiration that helped design his or her clothes, which kept the show interesting and amusing.

Some of the inspirations were nature, travel, romance, weddings, big cities and much more. There were also many different styles to all the clothes, which also helped to keep the show exciting.

Armine Ghalachyan, an apparel product development and merchandising technology graduate student, was a very unique designer at the show because her designs were trendy, edgy little girl clothes.

Her clothes were very creative, which led to her winning three awards based off of her designs. Her inspiration was her daughters, Salvia and Victoria, who were also the models for her clothes, which stood out.

All of the models that walked in the show were chosen at auditions in the beginning of the school year. It was up to the designers to pick their models based on the style and fitting of their designs.

All of the models looked very professional, and it was obvious that they had practiced on their walks and poses. The rehearsal show was held on Friday, and it gave a chance for all the designers and models to come together to make finishing touches and to practice walking the runway in their outfits.

It’s no surprise that the designers and models worked very hard considering the show was absolutely amazing.