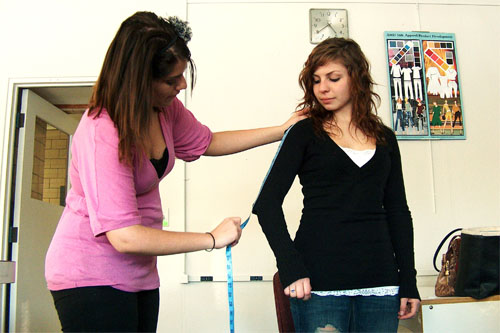 Color was a big deciding factor for Caitlin Andrews when deciding the designs for the fall/winter portion in the THREADS 2011 student produced fashion show.

“I ran with the idea of masquerade,” Andrews said. “Everyone gets a mask.”

Andrews plans to “have fun” decorating her masks by using mediums such as feathers, paint, sequins and pearls.

Andrews is a second time designer for the show, and will be completing five looks compared to her three from last year which she described as a “modge podge.”

“I am really trying to focus on a collection,” Andrews said. “I like the idea of homecoming dresses.”

Andrews is incorporating an “element of surprise” in this year’s runway show with four dresses and one mens look. Some of the dresses will have an A-Line silhouette and the mens look will be a purple button down with black slacks.

Andrews already has her swatches picked out for her designs. Some of the fabrics that will be seen in Andrews line are black and white polka dotted woven fabrics, a black faux fur, a fuchsia satin woven and black lace.

Andrews drew a lot of her inspiration from the Lauren Conrad collection, Christian Dior and Betsy Johnson party dresses. She plans to enter for the design awards in categories such as best runway, construction and special occasion wear.

Currently, Andrews is enrolled in the production and promotion class where Andrews and other students work along side with the THREADS co-producers, Jason Gagnon and Alissa Berriman. Andrews likes the visions that the duo has for the show.

Despite all of the pressure and hard work, she is excited for all the changes that THREADS is undergoing this year.