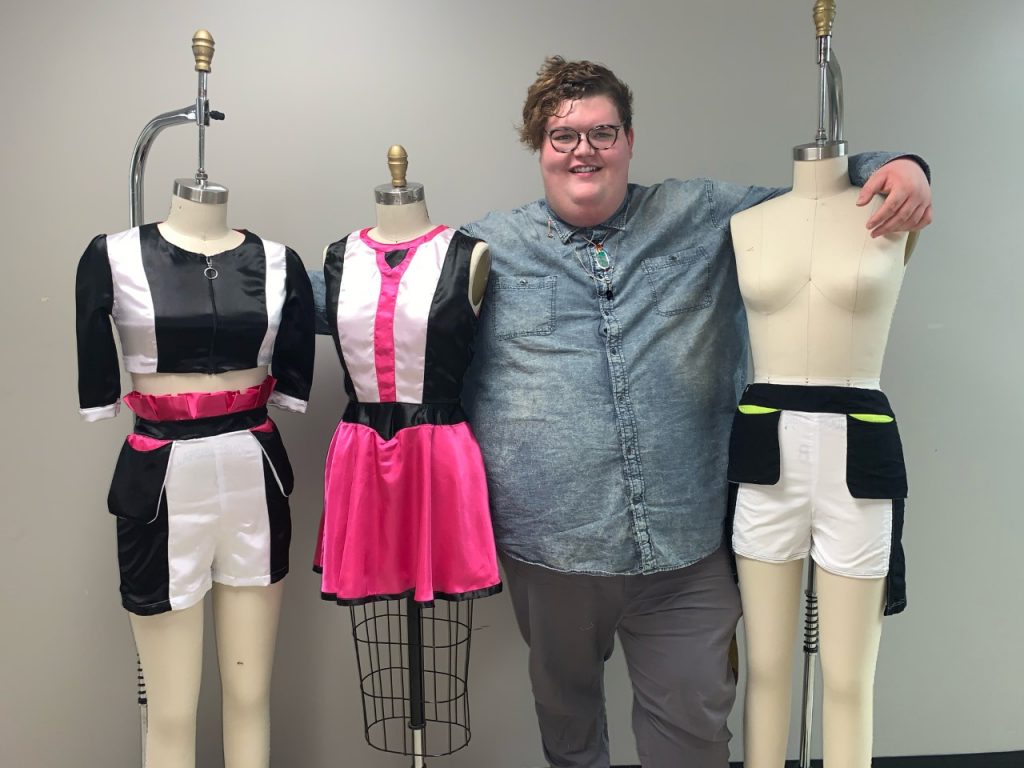 It’s that time of year again where the halls of Wightman are hustling and bustling with meetings and preparations for the 2020 Threads Fashion Show. Central Michigan University student and fashion merchandising and design major Josh Golden is more than ready for his first show.

Though a senior at CMU, this is Golden’s first time designing for the event.

“I got contacted by producers, asking if I wanted to design for Threads,” Golden said.

Threads is widely known throughout the fashion department, which Golden has been a part of since his freshman year at CMU.

“I’ve always been too busy to participate, but this is my last year. I wanted to finally be involved,” Golden said. “I don’t have a ton of creative design in my portfolio, so I thought this would be a great opportunity to build on that.”

Golden got into the field of fashion design through acting.

“I was a theater kid growing up,” Golden said.

He acted at his local theater in Holt, Mich. until he was fifteen years old. He found himself interested in the behind-the-scenes work of his plays; specifically, costume design.

“I got into sewing and designing, and I started by altering commercial sewing patterns,” Golden said. “Eventually, I knew what I wanted to make by just looking at Singer patterns.”

Golden was involved in this until the end of high school. When he’s not here at CMU, he still volunteers at his local children’s theater.

“That’s really how I fell in love with fashion,” he said.

Golden said he was bullied in middle school and reading his favorite fashion magazines, Vogue and W, were a great escape from that.

“I started dyeing my hair and playing around with socks,” Golden said. “It was a great form of self-expression for me.”

In terms of his style now, Golden likes to experiment.

“I play around with print and color a lot. I love color blocking,” he enthused.

He also said jewelry is a must for any of his outfits. He describes his personal style as very bright and bubbly, but Golden’s design style is a different story.

“My design aesthetic is very avant-garde. The word I would use is ‘eclectic,'” Golden said.

He references post-modern style as his main form of inspiration.

Golden is very excited to showcase his skills in Threads 2020. The theme for this year’s show is diversity, and he couldn’t be more thrilled.

“I didn’t request any specific models because I want to challenge myself in fitting and seeing how well I can do,” Golden said. “If the pieces I have don’t fit the models I get, I’m willing to start from scratch and make something they’ll feel beautiful in.”

This is something that’s very important to Golden. Enhancing body positivity and confidence is a personal mission of his and something he is always working to promote.

When it comes to his designs, Golden draws inspiration from his environment; the physical aspect of it as well as the people that inhabit it. He loves seeing how people interact with the world around them. He credits this to his sociology classes and his self-proclaimed love of people watching.

“I think people get so comfortable with current trends and dress stereotypes,” Golden said. “I love breaking through those with my designs.”

Golden loves post-modern designers. He takes a lot of inspiration from his  two favorite designers, Moschino and Alexander McQueen.

Aside from the art of designing, Golden is just as much involved with the technical side of his designs.

He works very closely with the American Association of Textile Chemists and Colorists and won their West Region Scholarship two years in a row. He also works in the Center of Merchandising and Design Technologies on campus.

“I’ve learned a lot about textile innovation, and it’s really helped me as a designer,” Golden said.

He attended an international textile conference in Texas last April, and he’s headed to South Carolina for another in March.

Golden is all about breaking barriers in the fashion design world. Come out to Threads Fashion show on April 4, 2020 to see his groundbreaking looks.