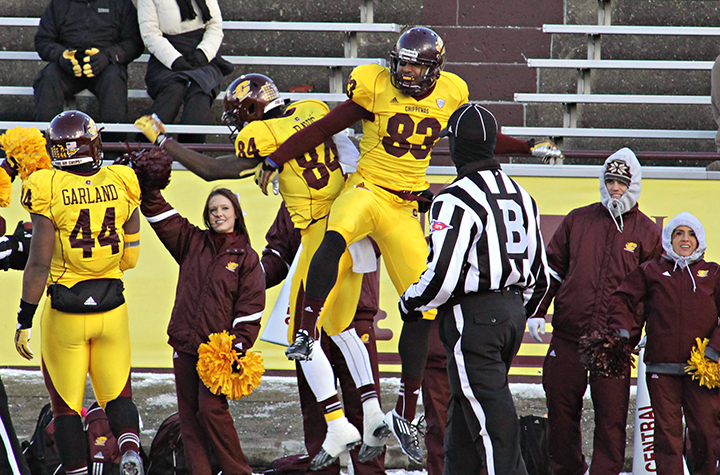 With a mindset of knowing the team’s destiny relies on whoever has the ball in their hands, wide receiver Titus Davis vows to keep and protect the ball to the best of his ability whenever he grasps it.

Coach Dan Enos said he was excited to get the win,  as his team’s defense played outstanding and the offense put together some long drives, which helped them win the first quarter and the game.

Central Michigan had great starting field position for most of the game and the team was able to get some explosive plays via the Cooper to Davis connection. Out of the 13 passes Rush completed, more than half went to Davis.

“We were able to get Titus open on a dig and get him open on a post corner,” Enos said. “It was man coverage and Coop (Rush) and him did a good job on those.”

Both teams had to adjust to the cold Michigan weather throughout the game. According to the weather report, there were 10 to 15  miles per hour wind gusts and on and off snow flurries.

The Chippewas were able to make up for a lack of production in the running game, by capitalizing on the man coverage Davis was facing outside. Davis said he had to make adjustments to the inclement weather but Rush’s crisp passing made his job much easier.

“We just had to do a better job at tracking the ball and Coop (Rush) did a good job of getting us the ball and just putting the ball in the money,” Davis said. “So I had the easy job.”

In the rivalry game against Western Michigan, Davis had nine catches for 122 yards. On the season, Davis has 59 catches for 1,090 yards receiving and eight touchdowns.

“The last couple of weeks I’ve been just seeing straight,” Davis said. “As a receiver, you love that and you just got to take advantage of it.”

If Davis continues to rack up big numbers every week, he’ll be a strong asset when Central Michigan plays it’s last game of the season against Eastern Michigan on Friday, Nov. 29, at Kelly/Shorts Stadium.