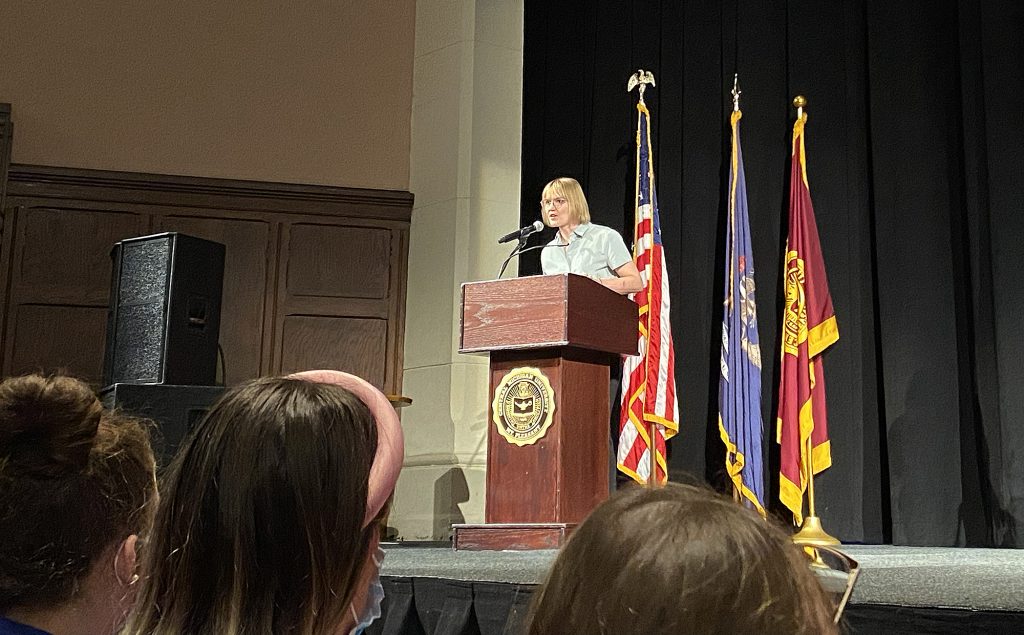 Story and photos by Izzie Pasciolla

Readers gathered outside the closed doors of the Platcha Auditorium, talking nervously as they waited. Books were passed between hands and notebooks were held at the ready. When the doors opened the group got in an excited line and made their way to the stage where a half circle of chairs were set up just for them.

Veronica Roth, author of the Divergent series and more, gave a keynote speech at Central Michigan University on Thursday evening as part of the Speaker Series. Prior to the keynote and Q&A session, a group of students were invited to participate in a workshop where they could ask Roth questions specifically about writing and getting published.

One of the main points that Roth discussed in this workshop was the value of outlining. Roth explained that she had to unload a lot of background information all at once in Insurgent, the second book of the Divergent series, because she did not elaborate on everything throughout the series.

“I’m an aggressive planner now,” she said, as she describes the outlines she typically writes that can be as long as 30 pages.

“Sometimes it’s a grind,” she said. “Expecting it to feel good everyday has to be unlearned.”

Roth recommends setting goals when writing a novel — not a page amount but things such as, “Finish this scene today,” and then stop. Don’t do more than what the goal for the day was.

Roth also suggested looking for different places within the story to begin writing, the writer does not have to start with the beginning. Roth begins with a list of scenes — Divergent started with the Choosing Ceremony — and then works her way back until it makes sense and then moves her way forward until it makes sense.

She also likes to make playlists of songs that remind her of a certain scene, character or feeling of the book.

Roth told students to “carve out a safe space to take risks.” When taking an idea and writing a book, it’s okay to wander away from the original idea and plan. Roth emphasized not focusing too much on what the writer wants the story to be, but just write and see what happens. Don’t stress what the original idea was, just focus on whatever is created. And no matter what, keep writing every day.

Roth discussed Divergent as well during the workshop. She explained that Divergent was originally from the perspective of Four, the deuteragonist. She said at first her novels are usually from a male’s perspective, and then morph into a different, usually female perspective.

She attributes this to the fact that most of the popular novels that have been released throughout her life are from the perspective of a male character. Roth enjoyed changing the focus of Divergent to Tris because a “young woman choosing an adventure was exciting.”

When it comes to publishing a novel, Roth encourages young people to go for it.

In her keynote speech, Roth discussed the role technology plays in the world and creative life, with a focus on social media and her new novel Poster Girl. Roth talked about how she uses reading and writing as a creative outlet to release stress and other overwhelming emotions.

When it came to applying for college, her advisor had her send her writing to different competitions to get some awards for her resume. Prior to this she hadn’t really thought about what she wanted to do in the future and with her writing.

“I didn’t care that I was good at [writing], I only cared that I liked it,” she said.

Roth also stressed the importance of sharing writing in certain situations. If a writer wants to grow and improve, Roth said that art must be shared with others. A writer must learn to let it go because it doesn’t matter why the writer started, what matters is the story that is ultimately created.

“No one cares how you started,” she said. “And neither should you.”

The main focus of her keynote speech though was her new book, Poster Girl, which is about a society under constant surveillance. In a way, it’s modeled off the current society where people are monitored through social media.

During the COVID lockdown she took a six month hiatus from social media to see the effects of surveillance and what life without it is like to really connect with her characters who are going through a similar thing. While there are certainly drawbacks of leaving all social media, Roth said there were benefits as well.

“Even if it’s only temporary, I finally feel safe,” she read from her journal after a month off social media.

Following her keynote speech, Roth took questions from the audience. Some of the questions focused on the fears of parents and restricting children from reading YA novels like Divergent and Hunger Games.

Roth explained that many parents do not want their children to read about teenagers fighting to the death. However, she argues that dystopian novels teach children about resilience.

This is why her favorite characters are usually the main ones, the resilient women, because it is what she’d like to be.

Roth also touched on the trend of book banning in schools and believes the challenging of ideas is troubling.

“Just because it makes you uncomfortable doesn’t mean you shouldn’t read it,” she said.