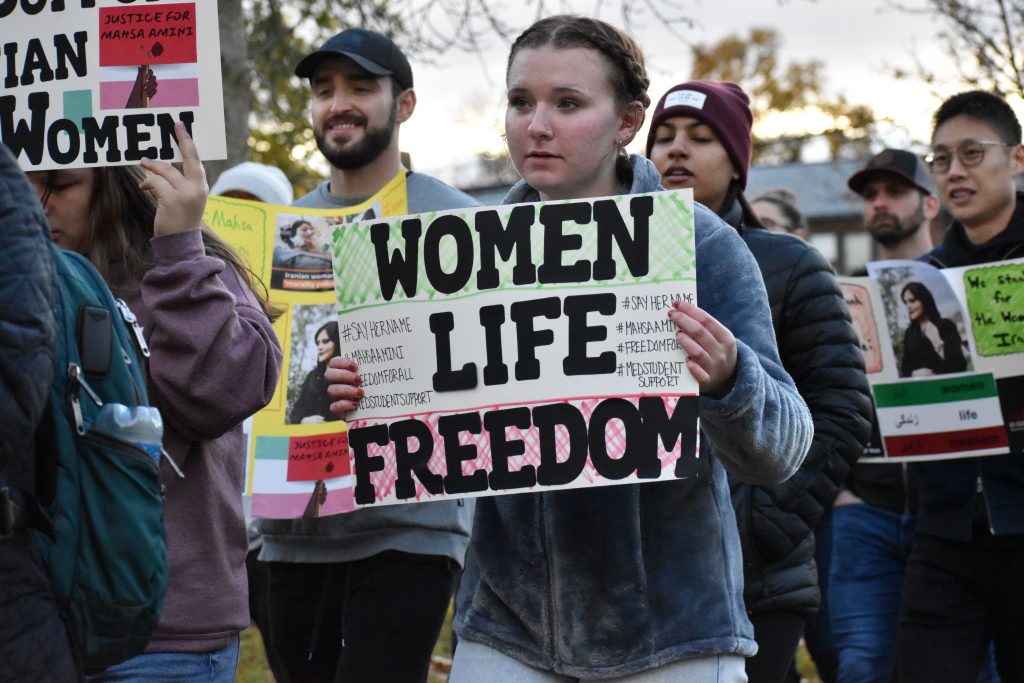 Those were the words chanted by students, staff and alumni on Wednesday night, as they marched on campus and Mission Street demanding justice for the death of Mahsa Amini.

Amini was a 22-year-old Iranian woman who died in police custody in Tehran, Iran on Sept. 16, 2022. She was arrested by the Guidance Patrol for “not wearing her hijab within government standards.” Following the 1979 revolution, the hijab has been statutory for Iranian women.

Amini’s death sparked protests across the world, condemning the actions of the Guidance Patrol, the morality police and the Iranian government.

As they marched, participants held signs that said, “justice for Mahsa Amini,” “we support Iranian women,” and “the time for change is now.”

The CMU event was organized by Kiara Timmerman, chair of the Student Diversity Committee at the College of Medicine and Arya Tavakoulnia.

“I worked with Arya and the rest of the committee for about a month now getting this march organized together,” Timmerman said. “We really wanted the students to be a big part of it, to bridge the medical school with the undergraduate campus and the other graduate programs, to all come together for this really important cause.

“We want everyone to realize that students care, that women’s rights are extremely important, and as busy as we are, there’s always time to take time to appreciate the rights that we do have and to fight for those who don’t have as many rights as we do that should have those rights.”

Undergraduate, graduate and medical students prepared to march and demand justice for Amini, in addition to faculty, staff and alumni.

“I knew nothing about what was going on, but I looked forward to it,” said undergraduate student Allison Strnav. “I feel like we should fight for everyone’s rights everywhere, not just in America. This is really important for women.”

“The ability to feel like I am doing something rather than sitting on the sidelines,” said Gillis. “Even if it’s just awareness raising, the ability to bring media attention to this issue that has been so closed off, and the nation that it’s coming from obviously is my giant motivator.”

“It’s not every day that the CMU community is able to come together and do something like this,” said Heroux-Croy. “So, every time there’s an opportunity and I see it, I try to bring as many people as I can and just participate.”

Taylor Idema, the Student Government Association President also attended the event with fellow SGA members, in support of the march.

“We’re hoping that it will bring awareness,” said Idema. “This is not just a CMU campus movement. Today has been 40 days since she was killed and there are movements all over the country happening today. So, I think it’s just cool to be a part of something bigger than just here.”

In Iran, there is a tradition that on the 40th day after a person’s death, their life should be celebrated by the people who have mourned them. Oct. 26 marked the 40th day of Amini’s death.

While the event garnered support from SGA and other various participants, President Robert Davies attended for himself and to represent the university as a whole.

“This is a grassroots effort by our students,” Davies said. “It started with our medical school students, then our excellent student leaders, the Student Government Association, jumped on. This is their way of being civically engaged, showing the importance and support for education, and also understanding that education is not accessible for many individuals. How education is an amazing tool to uplift communities.”

With Iranian security forces continuing to use excessive force on protesters within the country and the Iranian government blocking internet access to parts of Iran, Timmerman emphasized the importance of this movement and what CMU can do to give support.

“We want everybody to share this as much as humanly possible,” said Timmerman. “We want this out on social media, we want this out on the web pages, in the student newspapers, pretty much everywhere. The more awareness we can bring, the more help we can send to the women who are fighting in Iran right now and make sure their voices are heard and that they know their voices are being heard across the entire world.”

A participant visits with others while preparing for the march.

Participants begin the march by loudly chanting in front of Warriner Hall on Central Michigan’s campus.

A participant holds a sign and chants while marching.

People of all different ages and backgrounds join together to march for Mahsa Amini and change in Iranian hijab laws.

Participants begin to leave campus and transition to Mission St., in order to reach a larger audience.

A participant marches in the protest while holding a sign, and chanting for justice and change.