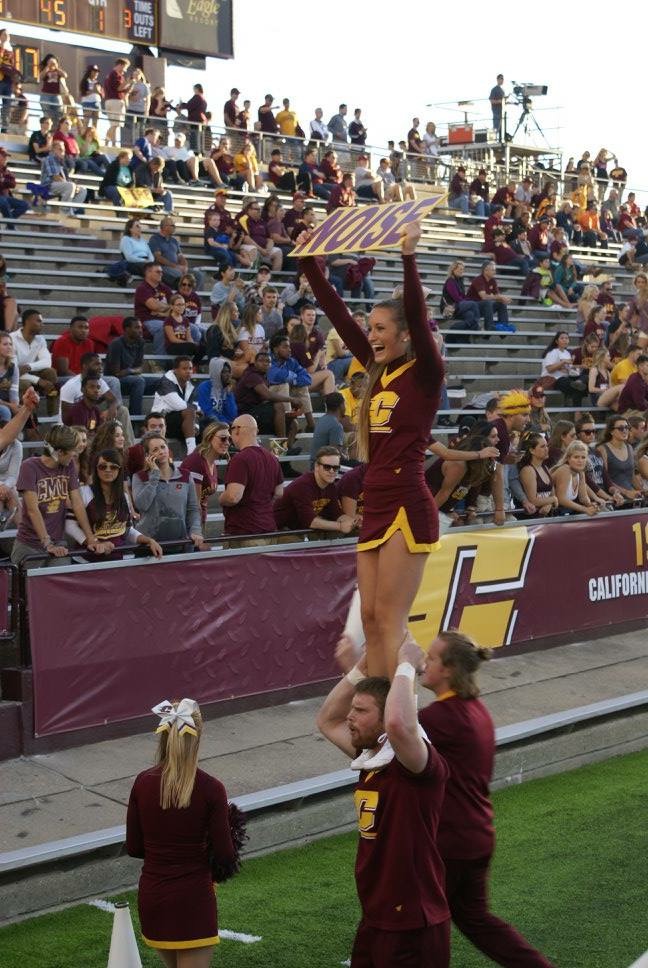 Many people are used to watching a basketball or football game from the stands, but not freshman Haleigh Ouellette. Ouellette gets to enjoy the game from the sidelines doing what she loves – cheerleading.

Ouellette may be a freshman on the Central Michigan University cheer team, but she has been cheering since she was in 7th grade and has been involved with gymnastics since she was only 5 years old.

Taking the Field during Football Season
Ouellette practices with her team the Thursday before a football game where they do a “game day” practice and go over stunt partners, pyramid formations and pregame cheers.

“My favorite part about football games are when the Chips win and the football team, cheer team and dance team go by the band as we all sing the fight song together,” Ouellette said. “I also love when the players first come out and chase us down the field.”

Cheering almost her whole life, Ouellette couldn’t imagine sitting in the stands watching the game instead of cheering on her team, she said.

Hard Work Pays Off
Cheering for your school’s team and showing pride at sporting events is something many students love to do. Ouellette and her team get to do just that, but do even more by adding stunts and tumbling as they do what they enjoy and love.

“At my first football game, my game partner put me up in a stunt and I got to hold the noise sign. The crowd was so huge and all the energy I felt was so overwhelming. I was shaking in the air and I felt an extreme amount of happiness. I could not stop smiling because in that moment I realized that all the work and dedication I had put towards cheer had finally paid off. I achieved my dream of being a college cheerleader, and so far, that was the best moment in my life,” Ouellette said.

Feeling the Hype in Basketball Season
The cheer team prepares for a basketball game by getting there about an hour before the game starts and getting into their five stunt groups, Ouellette said.

“One of my favorite parts about basketball games is right before the players run onto the court. The video that plays on the big screen is so intriguing and really gets the audience pumped up. It’s a great introduction for the players.”

The cheerleaders not only get to cheer on the team and pump up the crowd, but they also get to be involved in the crowd-pleasing t-shirt toss into the audience.