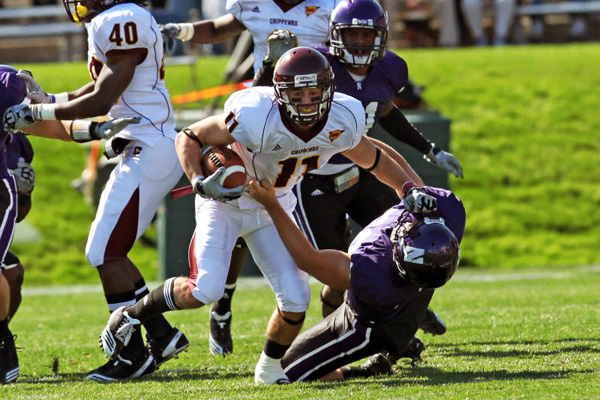 This week we are looking for our third win over a Big Ten team in three years, against an efficient Northwestern squad.

Starting the week off in the film room on Monday, it was clear that this week wouldn’t come down to who was the more athletic team or who would overpower the other.

Northwestern isn’t a team comprised of five-star athletes or physical specimens, but a team with great discipline and who play very smart and this would be our emphasis for the remainder of the week.

Northwestern beat up on the likes of Rice University, Vanderbilt, and Illinois State coming into this week and looking at them on the offensive side of the ball it is hard for me not to stop and stare at the staggering 81 completion percentage of quarterback Dan Persa.

He isn’t the typical Division I-A quarterback in terms of body type, but it is clear we have our work cut out for us as a defense. He has good decision making skills and has the ability to make plays with his feet once the play breaks down.

This week poses more of a challenge for me than usual because I miss the tail end of practice time on some days or meetings because of class.

Usually I can work around my unusual in-season class schedule by watching a lot of extra film on my own early in the morning, but this week it is more of a strain because Northwestern does a lot of things well in the passing game and its harder to get all of the defensive checks down and be on the same page as the other defensive backs without going full-speed through practice on the plays.

It’s hard sitting in class sometimes knowing my teammates are still hard at work for another half hour after I leave.

But sometimes multi-tasking is a must as a student-athlete and good time management is a critical element to our success, so extra meetings with coaches and players during the week are keys to being on the same page.

As difficult as it may seem to grasp, we think we have a good handle on what they will try to do to us defensively and the trip the university just outside of Chicago is only a day away.

Chicago and the night before

We feel confident going into the game and as always, embrace the underdog role.

Sitting in Chicago’s rush hour traffic for an hour-and-a-half wasn’t an ideal situation for an already lengthy five-hour bus ride, but allowed for plenty of time to enjoy the Chicago skyline with the Willis Tower (formerly the Sears tower) soaring tall above everything else in sight.

Excitement rises and by the time we reach the hotel I get the feeling the team is ready to play right then and there. After a short night of meetings and dinner, rest is much needed for the early 7:30 AM wake-up call on game day.

We had the luxury of playing later games the first few weeks which meant we got to relax and watch some college football at  the hotel and sleep-in on Saturday, but not this week,  an early day at the office.

There is a fine line between winning and losing and we are learning that as a team. A mere eight total points is the only thing that stands between us standing at 2-2 going into the fifth game of the year versus being 4-0.

Northwestern played a better game today and came out victorious in a tight 25-30 game. The nine penalties, including three personal fouls really, was a case of us shooting ourselves in the foot and they cost us a win on Saturday. In addition to the way we came out to play to start the third quarter giving up two quick scores to an offense that didn’t need any type of momentum given to them.

The only positive to take out of this loss is that it is a non-conference game, so all of our goals and MAC title hopes are still firmly intact. The loss hurts but we will bounce back and prepare for next week’s game as it is the most important one on the schedule now, because it is the next one.

Never looking too far ahead or in the past, Ball State is the new focus and we will give them everything we’ve got in front of a home crowd and a sea of maroon and gold in the student section for the first time in a month.