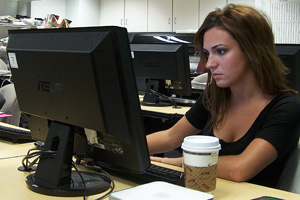 Katey Pomante aspires to work as a designer for Free People or to move out of Michigan to a city, preferably Chicago, when she graduates in December.

“The unknown is scary, but it is exciting,” Pomante said.

Pomante, an apparel merchandising and design senior, originally came to Central Michigan University to study broadcasting but was drawn to the apparel program. She says she will miss everything because she feels that the apparel program is as close as family.

Over the years Pomante was involved in the Fashion Association of Merchandising and Design, designed once for the Threads fashion show and studied abroad during the summer of 2008 in Paris.

Currently, Pomante is researching lists of jobs, trying to revamp her resume and build per portfolio so it can be the best. She feels she will be able to apply what she learned in classes to the workplace.

“The projects that we do in our classes are most likely things employers would expect of us,” Pomante said.

She said she is open to any job. She feels that she will not expect to get her first choice job after graduation because it will be important to build her work experience.

This past summer Pomante completed her internship at Anthropologie in Birmingham, Mich. Although she concentrated on design, Pomante worked as a visual merchandiser.

She described the work there as extensive, and said it gave her experience in other areas of the fashion field. Since her internship she met some great people who know her work ethic and are willing to pass a long her resume.

The advice that she had for Central fashion students was to be active and involved in school to get ahead of your competition. She said every employer wants you to be involved.

Pomante said it is also important to build a good resume. Take things out that aren’t good and to re-do old projects

She is excited for graduation and to be able to apply the knowledge she learned at Central to her future job.

“I never knew I had it in me to produce art,” Pomante said. “But I am compassionate about what I do.”