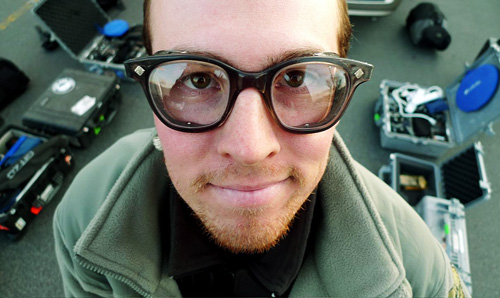 From riding on a dog sled in Alaska at sunset to searching for bugs on decomposing pig carcasses, Ryan Walsh catches it all on camera.

The Central Michigan University graduate works as a cameraman for Discovery Channel’s Dirty Jobs. Walsh, who graduated from Central in 2008 with a degree in broadcast and cinematic arts, is the recipient of this year’s Outstanding Young Alumni Award.

Walsh’s interest in cinema started in high school where he promoted local fundraisers on his high school’s daily TV announcements in Commerce, Mich. He eventually ended up at Central because of its broadcast and cinematic arts department.

During his time at CMU, Walsh bonded with a group of about 10 other students with similar interests. The group worked at Moore Hall Television together and many ended up moving to California, where Walsh lives now.

“It’s a little CMU network in California,” he said. “We all worked together while at CMU and now that we’re out we’re all still working together. And we’re getting paid to do it, unlike at CMU.”

In order to get his current job at Dirty Jobs, Walsh said he had to work hard. He started out at a production company in Los Angeles and eventually worked his way up to his current job.

Through Dirty Jobs, Walsh has been able to travel all around the country to film episodes. A typical week goes as follows: Monday is a travel day to the location; Tuesday, wake up early and follow show host Mike Rowe through all the duties that particular job entails; Wednesday is another travel day as the crew usually films another episode in a similar region; Thursday is another taping day and the crew travels home to Los Angeles on Friday.

Walsh said the taping days are long, typically 12 hours, and can sometimes last 14 to 16 hours. Although there can be long days, Walsh said he loves his job and it has allowed him some interesting experiences − both great and disgusting.

His favorite experience was following a man who breeds dog sledding dogs in Wasilla, Alaska. The crew followed as he fed, trained and cleaned up after his 50 to 60 world-class sledding dogs.

The crew didn’t need to travel the day after taping, so each member was able to ride a dog sled for a 30-mile run.
“We went right before sun went down, so the sun was setting as we were coming in,” he said.

A more vile experience led Walsh to Purdue University where he and the crew followed etomologists, who study bugs. This particular group of researchers studied pig carcasses and the bugs that feed off them.

The first pig Rowe had to inspect was one week old and didn’t smell very bad, Walsh said. The next one was wrapped in a tarp and had been decomposing for a few weeks and Walsh said half of the pig was completely unidentifiable.

“The smell was almost unbearable, almost to the point where everyone was gagging and almost vomiting,” he said. “Not being able to get away from that smell was pretty bad.”

Another aspect of the show is getting dirty.

A trip to Melvindale, Mich. near Detroit took the crew to a plant that burns cow bones into ash and grinds it into a finer material that is used to dye things black like ink cartridges and some cosmetic products.

The powder was so thin that the entire crew was covered so much they had to throw their clothes out after filming.

“I couldn’t get it out of my fingernails for a week,” Walsh said. “It was in my eyes, everywhere. There was no way to get around it.”

Situations like these lead to a big part of Walsh’s job: keeping the cameras in working order. In especially dirty or wet places, Walsh covers the cameras in trash bags to protect them. For cold climates like Alaska, he uses specialized bags with pocket hand warmers to keep the cameras warm so they don’t freeze.

“The situations we get in are difficult because it’s always different,” he said. “We’ve damaged many cameras because there’s no possible way we would’ve known what was going to happen.”

This unpredictability is one of the reasons Walsh said he loves his job. He said he feels lucky to find a job he loves, which is his main advice to current students and upcoming graduates.

For students who want to move to California, specifically Hollywood, Walsh suggests saving up money to prepare for a few months of not working while job searching then simply making the move.

“There’s never a good time to do it, you just have to do it,” he said.

When Walsh moved out West, he said he had no job lined up and didn’t know what he would find. His hard work and passion have paid off by giving him a job he said he loves.

“I look forward to every week and those long days,” he said. “If I have to stay 14 to 16 hours that just means I’m there longer having fun.”