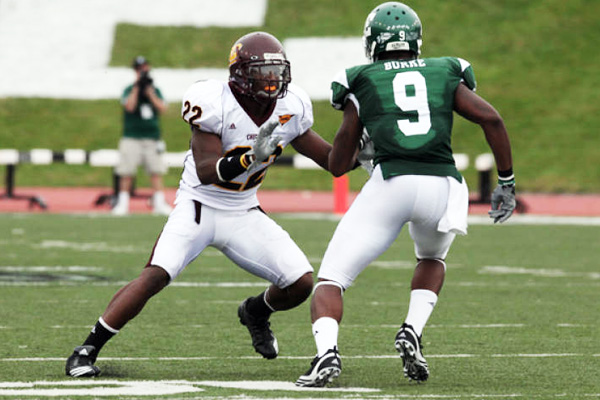 Records go out the window when going into Ypsilanti’s Rynearson Stadium. Known in the MAC for their toughness and ‘never quit’ attitude, we prepare ourselves for a 60-minute battle with the green and white.

It is Eastern Michigan week, a chance to defend our Michigan MAC trophy from a team that has won three of the last four meetings.

Going into just the third week of the season we find that our season is on the brink. With one loss in the MAC East, we can ill-afford a loss in the west as well.

It won’t be hard to get up for these guys because of the way they have embarrassed several senior classes since I’ve been here, and I know this senior class is ready for the task at hand.

Word quickly spread about all the signs hanging in EMU’s football facility and motivational tactics of stomping on Chips.

Coach Enos said it doesn’t bother him the least bit, so why should it bother us.

“Every day is another opportunity,” Coach Enos reiterated all week in meetings and at practice.

We know we let one opportunity slip away last week, and refuse to let another. Life and football are both games of opportunity.

It’s hard to not get too excited for the ensuing game knowing it will be the last time I suit up to play against this hated foe, the last time traveling on a bus to Ypsilanti with my team and also my first career start against the Eagles.

Staying in the same hotel as we did two years prior, when Eastern won the game and embarrassed our program, the hotel walls and meeting rooms bring back memories and many sick feelings for many of the seniors.

After a few emotional speeches at the pre-game meal, there is nothing left to be said. Players put on their headphones and head to the bus for a 15-minute ride to the stadium; just enough time to get your mind right and thoughts gathered.

The work is done; on Saturdays it’s just time to have fun.

It’s a big win for us, with the offense putting up some big numbers and the defense playing stingy, a good combination for victory.

It was probably our worst showing so far of the season as a defense with too many penalties and mental errors, but all are very correctable things.

Now the Chippewas go hunting for their third consecutive Big Ten victory on national television (against Northwestern). Should be another good one.