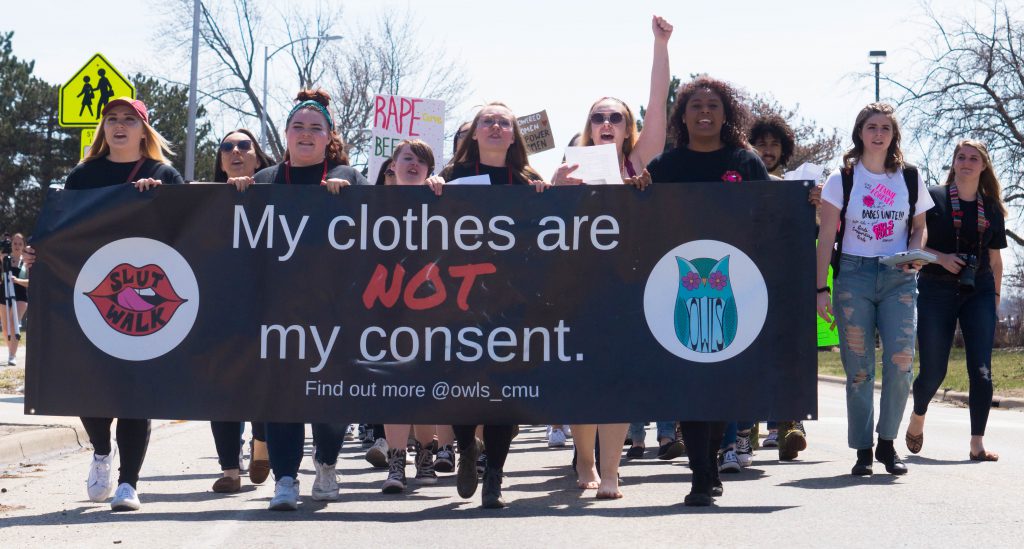 Michigan weather prevailed in the favor of the Organization of Women Leaders, also known as OWLs, in organizing their annual SlutWalk. The event took place on April 22, a week delay from its intended run. The march began at 2 p.m. outside the Bovee University Center, went down to the Education and Human Services building, turned right on Ottawa Ct., and took S. Washington St. back to the Bovee University Center. Participants then gathered in the third-floor auditorium for an open mic.

To preface this event, Grand Central sat down with the president of OWLs, Wyandotte junior Ashleigh Laho, to get a better understanding of the event.

“This event originates from a 2011 police address at a York University safety forum at Osgoode Hall Law School regarding rape on college campuses. The officer said, when talking about how women can avoid rape, that women ‘should avoid dressing like sluts’. After hearing this narrative, along with many others that blame survivors, students on campuses across the United States and Canada have organized SlutWalk events,” Laho said.

“This event is a way for CMU students, staff and community members to stand together against victim blaming, rape culture, and street harassment,” Laho said. “It is also an event that aims to empower survivors by providing a space for them to share their stories or any form of art related to the event’s topics.”

Participants of the SlutWalk gathered near the Southern entrance to the UC. Prior to the actual walk, people were able to enjoy each other’s company, have glitter put on them, and purchase SlutWalk merchandise. On the back of each SlutWalk shirt, a quote read, “My Clothes Are Not My Consent.” Each participant was given a sheet with a list of chants to recite during the march.

In the grassy areas, there were tiny, pink flags pinned to the ground. They were meant to depict the number of people that had been sexually assaulted so far this school year. Other signs were placed, describing relevant statistics, such as “1 in 4 women and 1 in 6 men will be survivors of sexual assault.”

The march commenced with an announcement by one of the OWLs members. Everyone was first provided safety instructions and told a police escort would aid the group when the route moved to the streets. A group picture was taken of all the participants and chants were recited. During the march, there were members of OWLs who would help guide the chants during the walk, known as “energy leaders.” After all this, everyone clustered and set on the path lead by the OWLs.

On the way down to the EHS building, Grand Central first ran into Houghton Lake freshman Cortney Ignat.

Ignat said the SlutWalk was a good place to “go somewhere and speak out against rape culture rather than just post something on social media.” She said an event like this made her feel “hopeful and empowered.”

“This really helps make people be brave in speaking out about their traumas from sexual assault,” Ignat said.

Down the quick stretch of Ottawa Ct., Grand Central spoke to Hemlock senior Rhiar Kanouse. She was a previous e-board member of OWLs last year, who helped organize the 2017 SlutWalk.

“The SlutWalk was revived on campus last year after not having it since 2014,” said Kanouse. “It was stopped for a while because there was controversy in that the walk was not inclusive enough. Since last year, OWLs has really made an effort to provide a SlutWalk that is more inclusive in speaking out against all types of sexual assault, not just against women, but also against men and trans people. It is important to acknowledge that there are different types of feminism depending on everyone’s distinct situation.”

On the latter portion of S. Washington, Grand Central encountered Wixom senior Selena Nareski. She pointed out to us that this march was especially important to her as someone looking to enter into the logistics field upon graduation.

“Women are underrepresented in this field and tend to experience a lot of sexual harassment,” said Nareski. “This event is important to combat sexual harassment and sexual assault that shouldn’t really exist in today’s society anymore. I’m happy to see all these people participate in this and feel more comfortable in discussing their experiences.”

It wasn’t just CMU students that took the microphone. Local community members also stepped up and spoke out. Two high school students spoke, and notably, an eleven-year-old spoke as well.

Various OWLs members spoke as well. The speeches were overall a culmination of touching anecdotes and encouraging words. Some would come up to the stage only to say “thank you” for organizing the event. The SlutWalk ended with a moment of silence for those that are not able to come to a support system for their experience with sexual assault.

“OWLs is already planning events for next year that will address how CMU has handled sexual assault cases on campus and how the university can do better at supporting survivors. OWLs understand that other Slutwalk events around the country have not all been all that inclusive. Rape culture and sexual assault affect everyone, and there are several populations that are much more at risk to be victimized. OWLs will continue to provide events that are inclusive of everyone who wants to take a stand against sexual assault and rape culture, and support survivors,” Laho said.