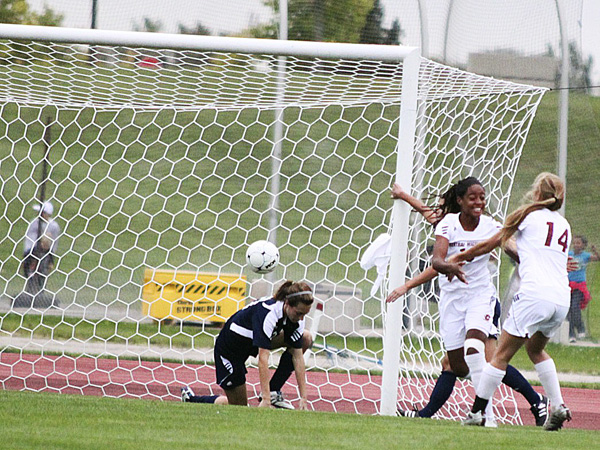 Nicole Samuel is a very key part of the Women’s soccer team at Central Michigan University. Even as a freshman still learning the game at the next level in a whole new atmosphere. (Samuel is from Brantfield, Ontario, Canada.)

After a very successful playing career, with many academic and athletic achievements, including playing for the Ontario provincial team and being named to the honor roll every year, Samuel chose to take her talents to Central.

Samuel is a very talented, athletic player on the field. She attributes her ability for knowing where to be on the field as one of her main strengths.

“Moving into the open space created by my other forwards and recognizing when to do so,” Samuel said.

While quick to point out that she needs to work on her first touch and tighten it up a bit to reduce unnecessary dribbles, Samuel believes it is something that she can improve and continue to work on.

On top of Samuel’s talents and athletic ability she is also a very aggressive offensive player who finds a way to always be in the right spot for scoring opportunities.

On the season Samuel leads the team with six points, with three goals on 19 shots. It is the continued addition of players like Samuel that keep the soccer team here at Central playing at a very competitive level.

Central was selected by coaches of the MAC to win the league title and enter the season as the odds-on favorite to repeat as MAC champs. The added expectations do not concern the Chippewas, as they keep their focus on one game at a time. Samuel does not believe that this puts added pressure on the team.

“The only pressure that we feel is performing at you’re best every day,” Samuel said. “And staying as positive as possible.”

Central defeated Akron on Sep.24 3-0, the team that was picked in the preseason to finish 2nd in the MAC. Samuel added a 2nd half goal to notch the score at 2-0, and to secure the win for Central.

While Samuel and Central are not overlooking anyone on their schedule, there is something about the Kent State game that means a lot to the team.

“Since its my first year here, and I’m still feeling everything out, but I have heard that Kent St. is always a big rivalry,” Samuel said. “And an important game for us (Central).”

The team and Samuel are very confident that the Central can win the MAC for the second year in a row.

“This team definitely has what it takes to win the conference,” Samuel said.