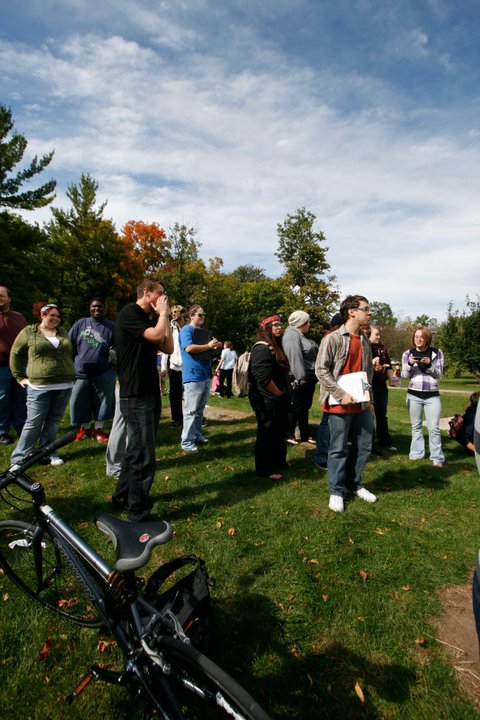 On Monday, Sept. 27, students at Central Michigan University gathered around the Park Library for the “Don’t Ask Don’t Tell/Dream Act Rally”. The meeting was set up with the intention of bringing awareness to the bill currently being shot down by Congress. Senate republicans filibustered the bill, that if passed would have expanded the civil rights of thousands of Americans.

The bill was designed to repeal the military’s “don’t ask don’t tell” policy which forbids openly gay Americans from serving their country. Republicans wholeheartedly disagree with the repeal of the policy even though the policy was deemed unconstitutional. With the current policy, thousands of Americans are forced to lie about who they are in order to serve a county that still doesn’t allow them the civil liberties that are granted to heterosexuals. Thousands more are turned down or dishonorably discharged every year for being homosexual. If a person wants to serve his country, why should it matter what gender he is attracted to?

The other half of the bill, the Dream Act, would create a path to citizenship for illegal immigrant students. Currently, there is no way for alien minors to independently gain citizenship; they are required to depend on their parents. If the Dream Act would have passed, immigrants born outside of the U.S. who entered the country as minors would have a way to become legal residents. The bill would require them to graduate from high school or pass a GED test, then go on to complete two years at a four-year university or serve two years in the armed forces before being eligible for citizenship.

The bill also has a few clauses that pertain to the subject’s character, for example they cannot commit a crime or be dishonorably discharged from the military, or they will no longer be considered for citizenship.

In this day and age it’s sad that political tactics and partisan bickering can stop the expansion of civil rights. I’m ashamed that we live in a country where our politicians care more about political arguments than the citizens they were elected to represent and the constitution they were elected to uphold. If you care at all about the rights of gay Americans or the rights of immigrants in this country, I encourage you to write your congress representative and let him or her know that letting this issue go unresolved or letting this problem be swept under the rug just is not an option.

For more information on the results of the voting in the Senate, or for a list of the homophobic republicans who voted no on this issue click here.