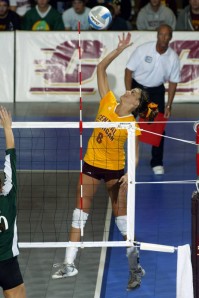 Lindsey Dulude and her relatives take the term “athletic family” to a whole new level.

The sophomore volleyball player from Midland is the daughter of Jeff and Terri Dulude, who both starred as Division-I athletes at Central Michigan University in the early 1980s.

“They both played here and had very successful athletic careers,” Lindsey said.

Her mother, Terri, is the only three-time first team All-MAC pick in Central volleyball history, while her father Jeff was a three-time letter winner for baseball.

In many circumstances, athletic success for parents can produce enormous pressure to perform on their children, but Lindsey insists that her situation is different.

“They’re always supportive of me, win or lose,” she said.

Lindsey’s athletic family doesn’t stop with her parents. Her brother, Travis, was a member of the baseball team at Central for two years.

“Our parents never pressured us into playing here or playing in college,” Lindsey said. “It just worked out that way.”

Her uncle, Jay Phillion, also played baseball at Central in the 1980s. His son (and Lindsey’s cousin) Scott, is currently a junior on the baseball team at Central.

“Lindsey is a very passionate girl, she really loves our family,” Scott said.

During the interview, Lindsey brought up several stories of family get-togethers. Some of her and Scott’s favorite times are when the family organizes wiffle ball games in the summer.

“In the end, we’re just a normal family,” Lindsey said.

Scott disagreed saying the family has the tendency to be very competitive.

“We’re pretty competitive,” he said.“Lindsey is no exception. She likes to have fun, but she works really hard and loves to win.”

Lindsey admits that her least favorite thing in volleyball is losing. Her statistics prove that, as she has averaged 2.24 kills/set through 18 matches this year.

But in the end, her most exciting moments come from working as a team.

“It’s a great feeling when we get going and we’re all working together as a unit,” she said.

Yet, when her eligibility is up and there are no matches left to play, she’ll have to decide – does she want her own potential children to continue her family tradition and someday don the maroon and gold?

“Based on my own experience, I’d love my future kids to feel the thrill of athletics. It’s been such a great way for me to develop friendships and self-esteem,” she said.

After talking about the tight relationships she shares with her relatives, it appears athletics can help develop family bonding as well.