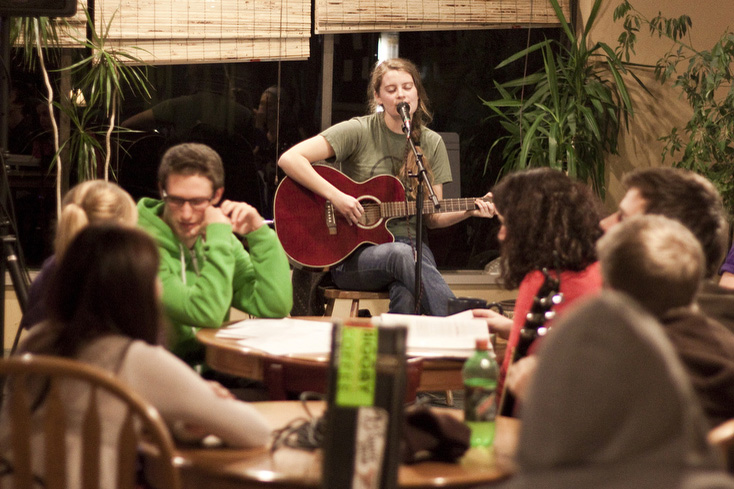 Coffee houses aren’t hard to come by in Mount Pleasant, especially since there are two major ones located just a street apart.  They are University Cup Coffee Co., located at 1027 South Franklin Street, and Kaya Coffee and Tea Co., located at 1029 South University Avenue.  Both of these places have a strong and loyal following by students and teachers alike.

Both University Cup and Kaya offer an array of coffee and tea drinks, with each place having unique and crafty names for their specialty drinks.  Kaya’s specialty drink, called Nonchalant,  is white and dark chocolate syrups blended with coffee.  University Cup has a specialty drink called The Grasshopper which is a mint latte with, as their menu says “a slight sweetness” topped with whipped cream.

The two coffee shops have food menus as well, and both give their patrons the ability to build their own sandwiches.  People are able to pick from the different meats that they want to the cheese and the bread. They are also able to pick from an array of toppings such as sprouts at the University Cup and horsey sauce at Kaya.  Soups are on the menu at both places, Kaya offers a soup of the day.  University cup’s house soup is loaded baked potato cheddar and can come in either a cup or bowl.  A bowl will set a person back $3.85 while a cup costs just $2.89.

Kaya has a more warm and cozy atmosphere, while University Cup has a more spacious layout, which includes booths for students to do homework or just hang out and have a cup of coffee with a friend.

Justine Young, an apparel merchandising junior, said “I really like coffee.  I like both Kaya and University Cup because they are trying to keep business local.  I live next door to University Cup so I frequent it more than Kaya, although I prefer Kaya’s coffee and overall atmosphere.  Sometimes University Cup’s blended coffee aren’t really blended at all.  I like the organic products that Kaya has to offer.  I would say if I had to choose between Kaya and University Cup, I would pick Kaya.”

Overall, students seem to prefer Kaya.  However, for a person to decide which coffee place they like better they will have to try both.  Both places offer different things that appeal to different people.