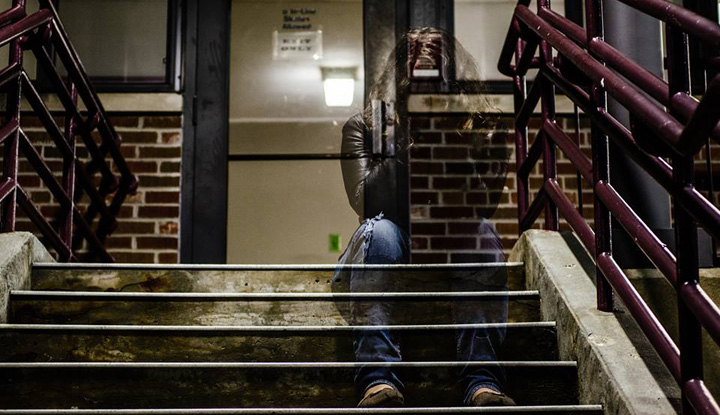 Her mother didn’t want to buy the house in the first place.

“It creeped her out,” Catherine* said.

The Romeo, Mich. house Catherine lived in for eight years brought years of questionable events and mysterious occurrences that can only be explained by the supernatural.

Catherine’s first interaction with the ghosts was on the third night in the new house. As a first grader, the large emptiness of the not-yet unpacked house created an eerie feeling and when she woke in the night to a strange, young girl sitting at the end of her bed, the feelings of unease heightened.

“I woke up because my feet were cold. I thought I had kicked my covers off but then there was this girl sitting there, perfectly calm, just looking at me,” Catherine said. “She didn’t look threatening. She didn’t look malevolent.”

Catherine explained that she pulled the covers over her head and asked the ghost to leave. When the ghost remained, she ran into her mother’s room for refuge.

Catherine’s mother did not respond. Catherine persisted in shaking her mother to wake her, but to no avail.

“My mom told me that whenever I was scared, to tell the thing to go away and tell it that it was scaring me. She said, ‘then it will go away and you won’t be scared.'”

Catherine had to use this advice often while living in her new home.

Unnatural incidents became regular occurrences, so regular that Catherine began to casually ask ghosts to stop bothering her if they made too much noise.

As Catherine grew older and was allowed to stay home alone, loud sounds similar to groups of children scampering, laughing, and playing would ring down the hallway.

It wasn’t until Catherine’s father began renovating, that deep questions about the ghosts began to arise.

The family had known when buying the house that it had been part of the underground railroad. The earthen and unfinished Michigan-style basement was separated into three rooms, the last of which had a tunnel that led to the neighboring house.

This tunnel was soon closed off by Catherine’s father but Catherine believes that the profound history the house had been a part of made it more prone to being haunted.

As Catherine’s father extended rooms and continued renovations, items such as baby shoes, children’s drawings, guns, and old-fashioned liquor bottles were found within the walls as he knocked them down.

Newspaper clippings were also found within the walls. The articles were from the late 1800’s and early 1900’s. The subject of each article found was related to the murder or disappearance of a person that lived in Romeo or the surrounding area.

When doing renovations in the attic, a ripped up piece of paper was found within the wall. When the pieces were put together, it formed a children’s drawing of a pumpkin. On the back was the name “Katherine.”

The family began to attribute the unnatural occurrences and the ghost sightings to the Katherine whose name was written on the back of the drawing.

Catherine believes that the coincidental connection of their names, only separated by one letter, may have brought on more activity.

The incidents with the ghosts soon took a turn for the worse.

“He would wake up in the middle of the night screaming,” Catherine said.

He would claim that there was a menacing, tall, shadowed figure standing in the corner of his room or hiding in his closet. He was so adamant that even Catherine’s mother would become terrified to look in the closet.

Catherine’s brother also began sleep walking around the house at night. One night he walked all the way to the backyard and up the tree fort, somehow without triggering the motion-sensor alarm.

During another incident, Catherine’s mother woke up to find him standing at the bottom of the steep stairs in the basement, talking illegibly to no one.

The mother asked who he was talking to and Catherine’s brother turned around, smiling, and said, “The three old ladies.”

She asked what three ladies  he was talking about and demanded he come upstairs right then.

According to Catherine’s mother, the brother turned back to the wall, uttered a few incomprehensible words, walked back up the stairs to his mother and said, “But they’re really nice.”

With the copious unnatural occurrences mounting, Catherine’s mother began to do extensive research on the house’s history, searching specifically for any Katherines that may have once resided there.

In 2009 the family moved out of the house. After years of research, they found no further information on Katherine, the three old women or the threatening man that stood in Catherine’s brother’s room.

“I can’t live in old houses now,” said Catherine “They have history and you can’t make that history leave.’