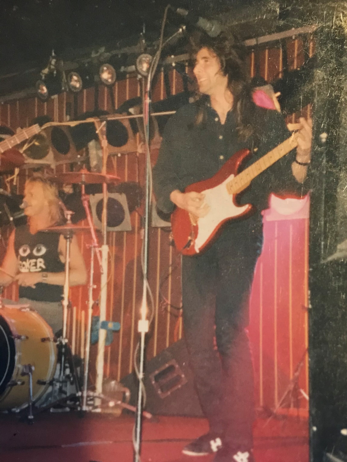 In a studio built out of his attic Brad Deroche can be found most nights under a large treble cleft playing his guitar. The sounds of anything from classical music, like Bach, to the rock sounds of Eddie Van Halen and REO Speed Wagon often echo out of the space. Brad’s day-to-day is full of classical music more than anything else. Deroche is a professional guitar player as well as a former guitar professor at Central Michigan University and a current professor at Delta College. He has been playing guitar since the age of five, but it wasn’t love at first sight.

“I wasn’t longing for the ability to play and my family finally got me a guitar.” Deroche said. “I sort of liked it more and more as I could do more with the instrument.”

When he first started playing guitar, he didn’t like the feeling of the hard metal strings and he couldn’t play very well. That all changed around the age of 14 or 15 when he started listening to the popular bands coming out in the late 1970s.

“It just became something that was fun to do,” Deroche said.“There weren’t a lot of other people doing it. There wasn’t a band I was trying to get into. I just liked it.”

As Deroche describes his first electric guitar his eyes light up with excitement like it was the first time he played it. He described the guitar in detail and even found himself playing air guitar as he spoke.

After slowly falling in love with his instrument, Deroche joined several different bands that played a lot of different clubs and bars. He opened a few shows for notable artists like Ted Nugent and Kansas, but those were just gigs.

Deroche was in a Jazz improv group with Cliff Davies, a drummer for Ted Nugent, from 1975 until the early 1980s. Deroche was more impressed with Davies’ production skills and the albums he had produced than with the rock music he was known for. Davies often spoke about the rock business and conveyed to Deroche that the business was brutal and more about contracts and business deals than good music.

“I was interested in making music for the sake of music and Cliff basically told me that the rock and roll business was like swimming with sharks,” Deroche said. “For somebody like me from a small town who was just interested in music I could see that down the road if I wanted to continue, I would have to either be a completely different person, or something would have to change because I think I would be one of those that would get swallowed up by the sharks.”

A combination of his knowledge of what the music business was like and a desire to maintain his family and a life outside of the club scene led Deroche to decide he wanted to get more education and teach.

In his later 20s, a professional rock guitarist at the time, Deroche moved on to classical guitar. He went to Eastman School of music in Rochester, New York and got his doctorate in classical guitar. That decision wasn’t without a cost either. It was an 8 hour drive every week to Eastman.

“It was a sacrifice, particularly for my wife. She had to take care of all three kids and a dog and a household while I was gone,” Deroche said. “I was gone pretty much every weekend for five years. During the summers I would spend my summers out there too. The sacrifice definitely fell on my wife’s shoulders.”

It still seemed that the lifestyle that Deroche chose was not conducive to the family driven life he was looking for and he agrees. Deroche knows that it was hard for his wife and brutal for him and his sleep schedule. Deroche paused for a moment to think about how his busy lifestyle effected his relationship with his kids and responded with a quote from a former professor and now friend of his.

“A half an hour with my kids where I am really listening to them and really trying to understand them and solely focusing on them always seemed more valuable to me than sitting in the house and just being around passively,” Deroche said. “I wasn’t a super dad by any means, but I was there. Now my kids are all adults, and I am still a part of their lives and that was really what I always wanted.”

Deroche recently signed a recording contract with a record label and has just finished recording his first album for them. He is still teaching at Delta college, but it turned out that quarantine was a good thing for him and his family.

CMU had some budget cuts especially after COVID started and so Deroche lost his job. Anything he was doing regarding private lessons ran its course and he stopped teaching at Saginaw Valley last fall. Now Deroche teaches a few days a week at Delta college.

“I have time to spend with my wife and the kids when they get a chance,” Deroche said. “I am working on several albums for the recording company I just signed with. I am really excited about the future.”

The interview finished in the studio in Deroche’s home discussing what Deroche sees for his future and the future of music in general with all of his experience in mind.

“I am really hopeful for my future and the future of music” Deroche said. “With this recording contract I can explore a new avenue and still teach on the side. I have so much hope for the future of music generally because music is so much more accessible now and a lot of the kids I am teaching right now are so good and even better than I was at that age and they are playing some really amazing stuff and I find it really exciting.” Deroche said.