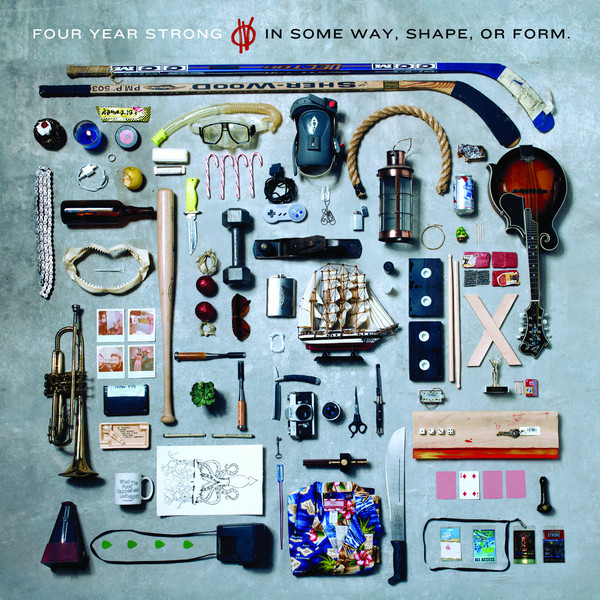 They promised their fans something different and they certainly delivered. Four Year Strong, now a four-member piece with the absence of a keyboardist and screamer, released its fourth full length album Nov. 8. Titled In Some Way, Shape, or Form, the record gives fans something new to gnaw on.

In fact, it seems the theme of the album encompasses just that—the band’s newfound passion in expanding who they are and who they want to be. They want to be known for something more than their beards and their breakdowns. (Although both are fantastic.)

The new album, released under Decaydance and Universal Motown Records, turns the volume down on the bass pedals. It refrains from breaking down and calms down the hollering. The end result is new music that has more digestible lyrics and melodies.

Lead singers Dan O’Connor and Alan Day tag team the guitar riffs that remind audiences of those heard by Dave Grohl of the Foo Fighters. Very stylistically different from their former, more hardcore material, In Some Way, Shape, or Form tells the audience that they’re ready to move on.

Four Year Strong bashes critiques of its stylistic change directly in a song appropriately titled “Fairweather Fan.” The chorus comes in blatantly telling those jumping off of their bandwagon, “You’re becoming what I hated/close-minded and jaded/ about what isn’t yours/My life! My hopes! My dreams!” As harsh as it sounds, at least the band is being honest with its intentions. The song explains that they didn’t do it for the money but for personal growth as they remind fans to “Rise or die trying.”

The album ends with “Only the Meek Get Pinched. The Bold Survive.”—a quote from the famous ’80s teen movie “Ferris Bueller’s Day Off.” The song mixes piano and classic guitar—like an ’80s ballad with more modern guitar and drums. Looking deeper, it seems that this is not just a small pop culture reference with musical tribute; Four Year Strong is taking Ferris’ advice.

Like Ferris’ best friend Cameron (the meek, push-over), Four Year Strong has gone through “Just another day/spent making all the same mistakes.” Again similar to Cameron, they’re pushing the Ferrari (their musical comfort zone) off of the edge to stick up for themselves, to grow a backbone to tell themselves, fans and producers that enough is enough.

In Some Way, Shape, or Form has a few strong singles like “Stuck in the Middle” and the more versatile “Just Drive,” which also has an awesome acoustic version. But it seems that the message grows old. In a sense, the band gets so focused on communicating it does not want to be confined to a monotonous music form that they fail to realize just how monotonous the album’s message really is. It is refreshing that this band has moved on and had the courage to explore its capabilities, but the next album will have to be stronger to truly rise from the ashes.