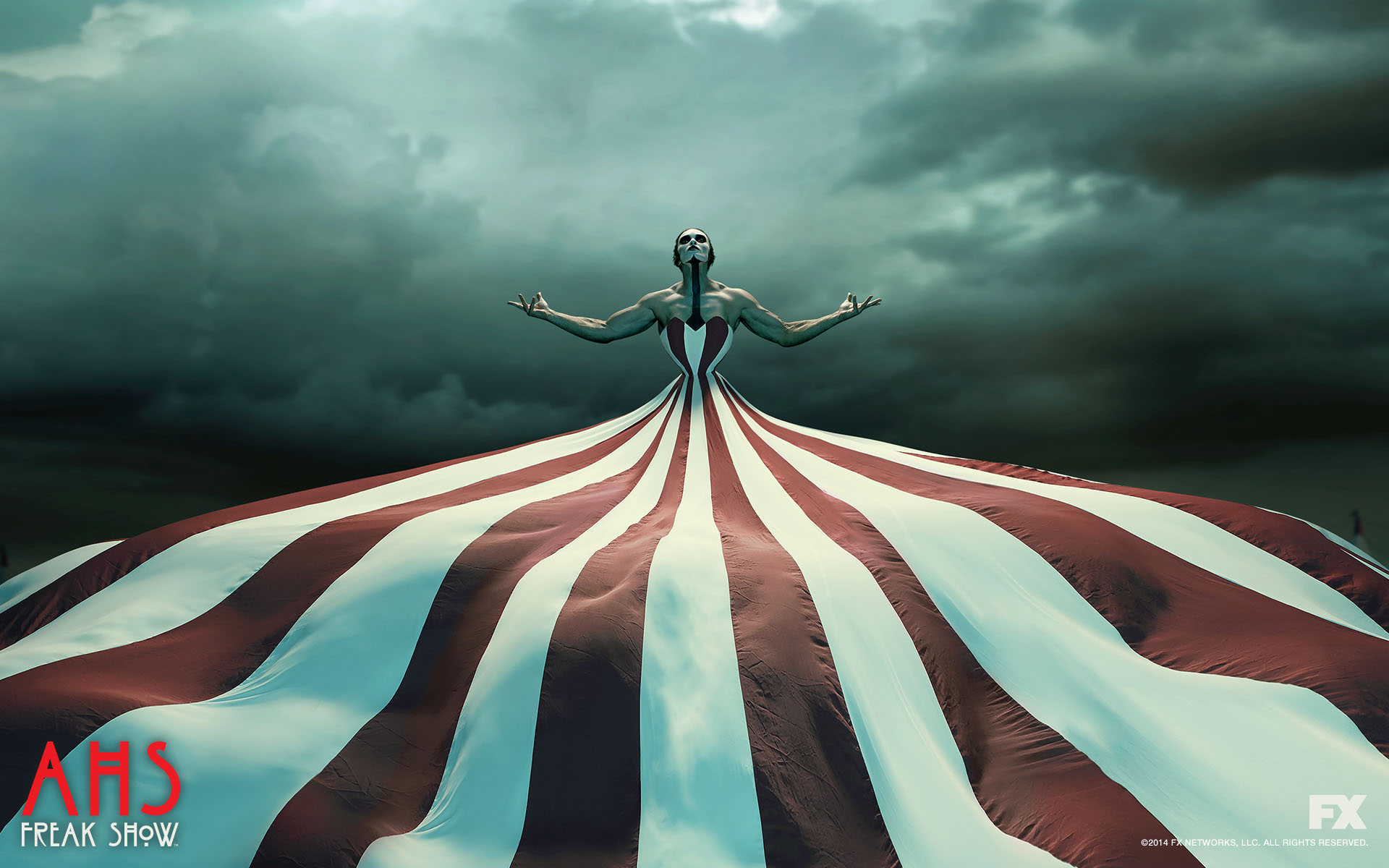 This installment starts at the American Morbidity Museum. Two cons, Stanley and Maggie Esmerelda (Denis O’ Hare and Emma Roberts, respectively), are trying to pass off a fetal goat with a sewn-on cat jaw (how that happened is probably worth an episode of its own) as a baby Sasquatch, but the museum’s appraiser sees through it immediately, as well as Stanley’s claim of having a “double degree” from Harvard, confirming O’Hare is playing his now third AHS character that is smart but not quite smart enough.

The museum manager, however, sees the duo is resourceful and says if they can scrounge up an authentic oddity they would be rewarded, since the museum’s attendance has been dwindling since the advent of The Ed Sullivan Show (once again reinforcing the theme of one form of entertainment outdating the other). She mentions a freak show in South Florida to the pair of cons.

We are next in Florida on Halloween. We visit Ethel, being told by a doctor that she has cirrhosis of the liver, and she has six months to a year to live. She bellows, not for the diagnosis but for the realization that this is the first doctor who treated her with respect.

Ethel makes her way to the carnival and tells Betty/Dot they aren’t performing today because no carny, we are told, performs on Halloween, lest they be visited by the spirit of Edward Mordrake, (Wes Bentley with a lackluster British accent) a former carny with a demonic second face on the back of his head that tells him to commit evil deeds.

Ethel explains Mordrake killed his entire troupe before himself but not the demented “Visage,” and appears before any carny who dares perform on Halloween to force them to take dialect classes – or he kills one of them to bring back to Hell with him. Either option sounds terrible.

The carnival is visited by Maggie in the guise of “Miss Esmerelda,” the fortune teller. She catches the eye of Jimmy the Lobster Boy and is granted an audition with Elsa for a spot in the show. Slyly observing the room’s various photos and trinkets for anything pertaining to the carnival matriarch’s past, she “senses” that somebody stole the spotlight from Elsa.

“That bitch Marlene stole my career!” Elsa said, likely referring to old-school film star Marlene Dietrich, who was doing the ethereal German woman act way before it was cool. “Miss Esmerelda” reveals that a mysterious stranger will soon walk into her life and make her a star (the plan is presumable for accomplice Stanley to show up as the stranger). Elsa is enthralled.

Ethel starts drinking again for the first time in years despite the doctor’s orders, and runs into Dell. The former lovers share some whiskey before she reveals her condition and asks Dell to watch over Jimmy and to make sure Jimmy never discovers Dell is his dad.

Back at the ranch, Dandy makes a masked killer clown costume in his room. He sneaks up on Dora the maid (legendary singer Patti LaBelle who can apparently do a killer Woody Woodpecker impression), but Dora stands her ground and dares Dandy to murder her. He cries instead.

The psycho-in-training decides to blow off steam by torturing the housewife and little boy still stuck on Twisty’s bus. Twisty interrupts, appearing with another victim.

Dandy is thrilled, as they get to have “more fun,” he says, with an ever-so-slightly orgasmic shudder, like a smaller version of the masked O-face Twisty made (you could tell in his eyes) while killing the toy man’s assistant in the beginning of episode two.

After a shared surgery dream, Dot tells Bette she intends to have her surgically lopped of their body. A master of subtly, Dot is. The two try to rehearse on stage, but Elsa shoos them away so she can practice wooing her expected stranger. She performs Lana Del Ray’s “Gods and Monsters.” (Elsa karaokes she’s “living like Jim Morrison,” who would’ve been the whopping age of nine in 1952).

A stranger does indeed appear, just probably with more faces than she was expecting, as Bentley’s Mordrake and his uneven accent materialize. His British dialect wobbles more than a frat boy after too many keggers. Simply rehearsing on Halloween warrants his wrath, it seems.

Mordrake first visits Ethel to see if she is the one to be damned to Hell. Cue the typical AHS expeditionary flashback!

The bearded Bates gives her background: She’s from Baltimore (I don’t know if that totally redeems her accent, but whatever), and was a hit in the 20’s, even if with the beard. However, a Dell-advised turn to Shakespeare wounded her career. She tells Mordrake her Horrible, Long-Hidden Secret: She let Dell set up a “freak birth” for people to pay to watch, deeming Jimmy a monstrosity just seconds after exiting her womb.

Ethel’s tale wasn’t Hell-worthy enough, as Mordrake’s Visage deemed she was not the freak to take.

Assumingly, Dell and Desiree have more to do during this season before it’s brimstone time, and Jimmy, “Miss Esmeralda” and Betty/Dot presumably have plot lines to resolve, though it could be interesting if only one of the twins has their life taken.

Demonic predictions aside, Ethel ends the episode in the darkness; even the damned don’t want her.

What did you think of the episode? Who will Mordrake take to Hell, if anybody? Will we be treated to an even more ridiculous accent later in the season? Let us know at @GCMagCMU.