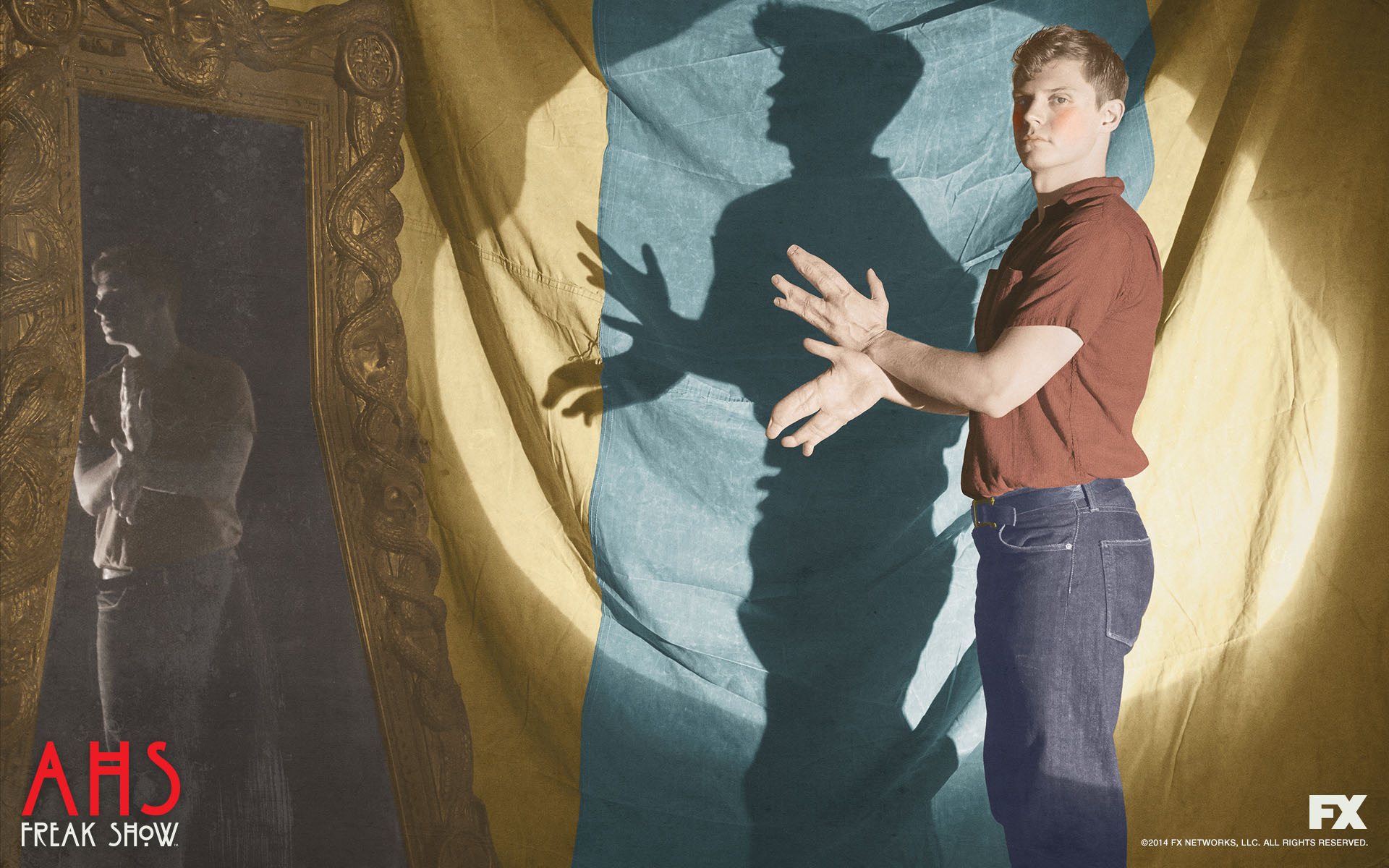 Hello one and all, we have two episodes today: “Magical Thinking” and “Show Stoppers,” that feature one of our favorite stars in a very different role – Neil Patrick Harris.

But let’s start with Jimmy.

Poor guy – he’s in jail for a murder he didn’t commit (and, ironically, not the one he did commit), not to mention he lost his mom and girlfriend. But good ol’, not-at-all murderous Richard Spencer is there to help him lawyer up – as long as he pays for it by selling his lobster-like hands.

Apparently, Jimmy is now an idiot and actually believes this mustachioed cartoon character will help him. Soon he’s in a hospital bed with the inability to scratch himself.

Dell comes in and threatens to kill Spencer when he sees him next, but Jimmy insists on holding onto an inexplicable hope that the lawyer will come through. Dell’s wasn’t having that, though.

He tells the freak show the news, who seem more disturbed by Jimmy still being incarcerated then by his lack of hands. Dell and his former enemy, Amazon Eve, bust Jimmy out – killing a couple cops along the way. Dell hopes they can buy the freak show from Elsa to start the “Toledo & Son Freak Show.”

But, what’s this? A handsome stranger selling chameleons finds his way into the circus tent and Bette/Dot, who have decided their primary goal is sex, are looking to get a piece. Too bad when Chester (a World War II veteran with a metal plate in his head) first sees the twins, he sees the heads of the two women before the heads transform into Sarah Paulson’s.

The stranger, Chester Creb (Neil Patrick Harris), is an amateur magician and tries to nudge his way into the show with a magic act, but Elsa isn’t buying it – that is until she notices that he’s good with finances. She lets him perform his magic act for the show as long as he also functions as a bookkeeper.

Chester asks the twins if they’ll be his assistant for his saw-a-lady-in-half trick, as magic is about distraction, and there is no better distraction than them.

“Because we’re freaks?” Bette asks. “Noooo,” Chester protests. “Because you’re beautiful.” How nice! Surely there will be no flashbacks to his twisted backstory to ruin his charm.

But unfortunately, we are treated to just that – a flashback to Chester’s twisted past, which includes a close up on Chester in his army uniform with a drink in one hand and Majorie in another, watching the two women he saw projected onto the twins get freaky.

Psychological roadblocks aside, the twins still corner Chester, and a relatively graphic scene closes out one of the highest rated shows on television.

However, Dandy’s corrupt cop has been doing some sleuthing for our dapper deviant on the twin’s new beau. It seems Lucy and Emily started getting together while Chester was off on the beaches of Normandy, and the war made our boy Chester a bit disturbed.

Meanwhile, the other characters still exist. But never mind that, Harris’ entire character arc has to be shoved into these two episodes!

The Neil Patrick Harris train keeps moving as he buys the freak show from Elsa.

That night, cops show up at the show to look for Jimmy, but Chester has more important matters to attend to: Majorie is missing. Dandy shows up to tell him that Majorie is in the big top and she’s very upset with him. Sure enough, she is.

Also, Esmeralda finally appears and shows Elsa the dead corpse of Ma Petite. Dell also shows up with Jimmy in tow, and goes to his trailer, where Desiree is waiting. She’s done with him, and Dell admits his crimes. “I killed Ma Petite!” The last thing he hears is his own sobs before Elsa shoots him in the back of the head. “That’s all I needed to hear,” she says.

Goodnight, Bald Mountain, your constantly changing motivation will not be missed.

In the second-to-last episode of the season, “Show Stoppers,” we begin with the freaks and Richard Spencer under the big top celebrating Elsa’s leave and Chester’s takeover. Chester is dismissed shortly for other matters, as Elsa wants to watch a movie, “Freaks.”

With subtle foreshadowing, the performers describe the plot of “Freaks” to Richard Spencer, with the freaks-kill-a-traitor ending spoiled for him with huge grins. Then, surprise! Spencer discovers Esmeralda ratted him out when he unwraps a box containing the head of museum woman, and soon he’s chased down by the freaks despite his screams that Elsa killed Ethel.

He crawls in the mud with the armed carnies close behind him before the screen goes dark.

The next day, some of the less prominent freaks suddenly decide Spencer was telling the truth, and Elsa must die for taking one of their own.

Elsa brings in the prosthetic maker, Massimo (Danny Huston), who made her wooden legs, to whip up some hands for Jimmy. Apparently Jimmy’s fee is hearing Massimo’s backstory, as he promptly explains that after he constructed Elsa’s legs, he spent years finding and killing the Nazis that deformed her. Massimo finally got to the ring leader, Hans Gruber (Which happens to be the younger version of Nazi leg-removing doctor James Cromwell from “AHS: Asylum”).

Massimo tortured him until he could no longer feel love.

Meanwhile, Amazon Eve visits Jimmy. Once he has his new hands, Eve says he won’t be a freak anymore and could live a normal life. Because wooden hands weren’t considered abnormal at all in 1952, right?

Chester goes through a rehearsal with the rest of the freaks, but the twins announce they no longer want to be his assistant. Devastated, Chester demands that someone help him rehearse the sawing trick, and Esmeralda quickly volunteers.

As she gets in the box, Chester begins seeing the faces of his dead wife, her lover and Marjorie. We then see Chester’s real purpose on the show, besides adding an extra dose of perplexity (and to hopefully earn Harris a guest actor Emmy nomination), as he cuts open Emma Roberts, intestines and all.

The freaks stand dumbfounded. “Now what?” Legless Suzi asks. “She had it comin’,” Desiree says.

Let’s get this straight: Though Jimmy had forsaken Esmeralda/Maggie earlier and she helped a lot of other freaks get murdered, it’s still an unceremonious end to a character that functioned as the voice of reason just a few episodes ago.

Eventually, Chester breaks free of Marjorie by stabbing and “killing” her, and quickly brings the wooden corpse of his companion to confess to her murder, never mind the other girl whose blood he’s wearing. Esmeralda’s murderer is more concerned about the death of the puppet than hers.

The twins, completely okay with the fact that their former lover just cut someone open, warns Elsa that the freaks are coming for her to repay their debt, since the German maven saved them in the first episode. Apparently the whole, “Elsa trying to murder them for the entire season” thing is just water under the completely ridiculous bridge now.

Elsa gets out out of there as quickly as her oak legs can take her, and Dandy buys the show so Elsa can leave for California to try to make her television dreams come true – even if Spencer did lie to her.

The next morning, Dandy, grinning like the world’s prettiest shark, comes in to set things up and get his new servants ready for the show. He saunters to the stage – his dreams of performing are finally coming true. After taking a bow, he hears a rustling sound. It’s Spencer in a cage, cut down to fit into one of Meep’s old costumes.

Meanwhile, the recovering Jimmy wakes up with Massimo –who may or may not know Elsa has fled – by his bedside. Jimmy’s hands are finished, complete with the the fingers stuck together. He now goes on to embrace the leadership role everyone has been telling him he must take on.

Tweet us your thoughts about this season of “American Horror Story” at @GCMag.