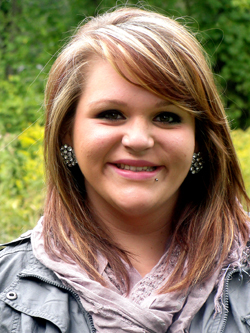 Spending an hour atop the Eiffel Tower made junior Ashley Davis forget all her stresses and worries. She said it was a jaw dropping sight and an unforgettable moment.

“Seeing that made you not think of anything else,” Davis said.

Mesmerized by Romanesque and French Gothic architecture, Davis said she had one of the most amazing experiences she has ever had.

Along with nine other CMU apparel students, Davis studied abroad at the Paris American Academy this summer for about a month. With the school being located in the Latin Quarter close to the Notre Dame cathedral, students were immersed in French culture.

The trip, led by Dr. Maureen MacGillivray, an Apparel and Merchandising and Design professor at CMU,  allowed students to earn credits and learn Haute Couture techniques, such as pleating, Madame Gres’ style of draping, couture zippers and the Shibori technique for dying fabric.

Students were not allowed to wear casual clothing such as jeans to class, and were required to attend an hour of French lessons during the first week. Coursework and workshops varied from day to day. Sometimes students would be inside the school all day in workshops, and other times half of the day was spent in the classroom and half was spent visiting exhibits such as Yves Saint Laurent.

Davis learned various techniques, such as hat making works from famous Haute Couturist John Paul Gaultier, that she could not learn in a CMU classroom.

The instructor for Madame Gres draping is one of the last couturiers alive who knows the technique. This style of draping is a specialist skill which gives the gown a flowing look by letting the cloth fall in loose folds.

Davis felt that this technique was the most difficult for her.

Her favorite technique was Shibori, a japanese dyeing technique.

One of the best experiences she had on the trip was when she attended fashion shows and had the opportunity to dress models for a Paris Fashion Week menswear show.

“Being able to work the show and feeling like a professional was pretty crazy,” Davis said.

She said that she and another student were lucky to have their names drawn to dress models throughout the show for Walter Van Beirendonck, a top Belgian designer. Davis said she had to do everything for the model.

“The models would stand legs spread and arms out waiting to be completely undressed and dressed,” said Davis.

She was required to zip, button, fasten and tie all parts of the garments and make sure the models looked exactly like the pictures given within a matter on minutes. Davis was proud and felt accomplished when Beirendonck received great show reviews and she was able to see pictures online of the models she dressed.

A dislike for French food, getting lost and being stared down when she went to McDonalds in sweats did not hinder her overall experience in Paris and at the Paris American Academy.

“It was an experience of a lifetime,” Davis said. “It was something you couldn’t get here.”

After all of their hard work and final presentations completed, Davis and the other students shared a final bonding on a nightfall dinner cruise through the city two days before their departure.

She said she will never forget the lights of Paris, her new friends and all the memories.