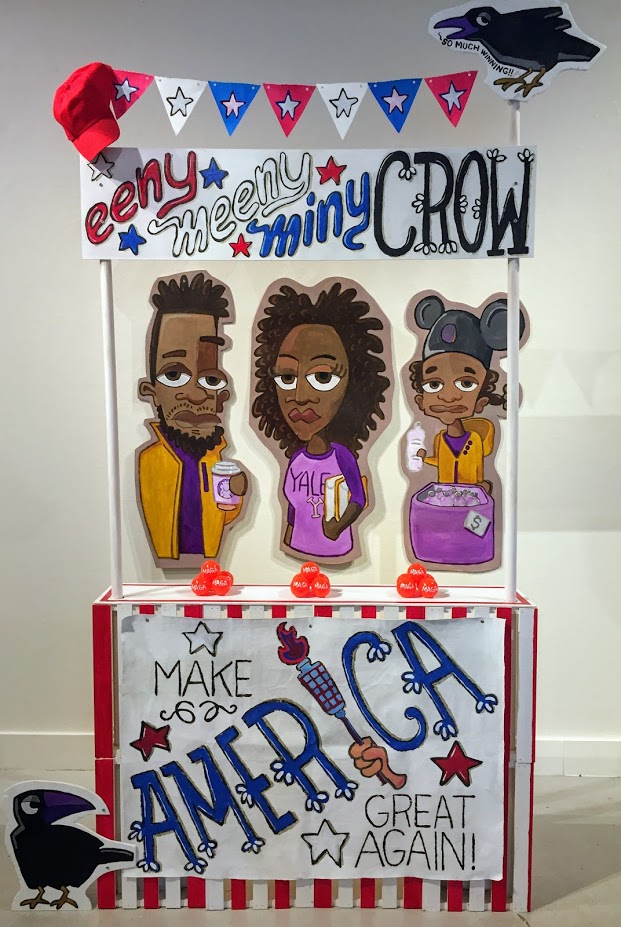 Does life imitate art or vice versa? An age old question to which artist Corby Blem believes the answer is hidden within it.

“I think that the two influence each other,” Blem said. “Charles Dickens’ work was a huge influencer in the child labor laws that we have today, taking off for the weekends for most jobs to name a few. But I think that work can also inspire other people to think, view or hear things in a way that can move them. And maybe even change they way they operate in society.”

Blem has been a part of the Central Michigan University family for a long time, working for Student Employment Services as the Senior Specialist Clerk for nearly 13 years.

He’s been an artist for even longer, doing caricatures and different works of art for CMU and all around Mt. Pleasant.

“I’ve been drawing all my life,” the 50-year-old man said. “Crayons, paint, pencils, markers, anything—even mud. Whatever I could get my hands on.”

With the most recent racial climate in the United States however, Blem decided to take his art to another level and, more importantly, make a statement.

Growing up in Indiana, Blem is no stranger to racism; the basis for the title of his piece is based on a the childhood rhyme, “Eeny, Meeny, Miny, Mo.”

“The original words that I’d learned as a child to follow that phrase were: ‘Catch a n**** by the toe.’ Thankfully my sister told me to use ‘tiger’ instead.”

The piece, which features a carnival like game, has balls that have “MAGA” on it. The targets? Black Americans who had police called on them for doing seemingly every day things.

“When we as a country use that phrase [MAGA], we’re throwing it in the faces of black and brown people, saying that we as a country referring to a time in our history—somewhere from the 20s and 50s that didn’t include you being equal to us [white people].”

The man on the left was arrested by police in a Starbucks because he was waiting for a colleague inside. The woman in the middle was a Yale student who fell asleep in her dorm’s common room and another student didn’t recognize her, so they called the police. The girl on the right was selling water bottles to try and raise money to go to Disneyland, and the police came because a neighbor didn’t like that she was selling things in their neighborhood. The individuals that called the police were white, the people featured as targets in the game are black; both groups are American.

The piece was in the CMU Art Gallery, straight down the middle of the walkway from the door, unmissable and striking.

“There was a moment when I was painting it where I felt sick to my stomach and I thought ‘Am I really going to do this?’” Blem said. “I started to sit down and do some research, and found there was actually a game like this called “Hit that N****, Baby,” where white people would take turns throwing things at a black man with his head through a hole. That’s when I knew I was on the right track and kept going.”

Though his work didn’t win anything at the Art Gallery show, Blem hit his mark with the piece he created.

“After the show ended, I got an email from someone who was surprised that my art had been voted for at all, and said that it was art like the piece I made that caused this separated thinking,” Blem said. “As soon as I got that email, I knew that I’d accomplished what I’d set out to do.”

When asked why he cared so much to make a piece like this, Blem said that he cared because he believes the U.S. is better than what we are now.

“I think as a country we’ve become fearful of things that we shouldn’t fear at all,” Blem said. “The people in my piece are Americans, doing American things, yet I have family members that would agree with them being arrested, and I know some of my friends who have been discriminated against. We as a society can do better. I know it.”

In this way, Blem doesn’t want life to imitate his art; he wants someone to look at his piece and operate with acceptance rather than fear. He wants to inspire people to look at the world through a different lens. That, according to Blem, is what art should be. “Better art does that, it inspires, sometimes it pulls something emotional from them. I hope my piece does that.”