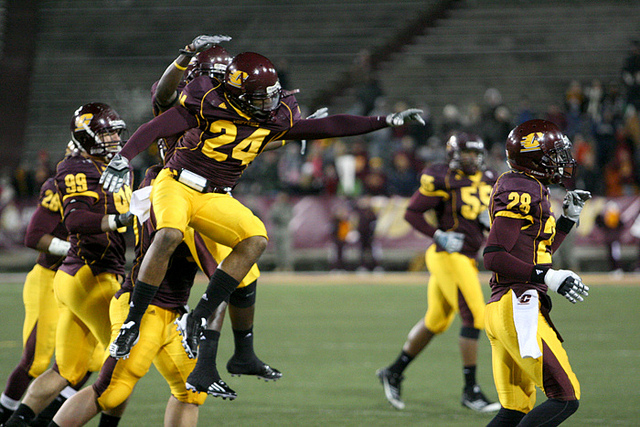 It has been a season that Central Michigan would love to quickly sweep under the rug and forget. Central enters its season finale completely eliminated from any postseason play sitting at 3-8 (2-5 MAC). A last place finish in the MAC West is also clinched.

Quarterback Ryan Radcliff has once again put up impressive numbers throwing for 23 touchdowns and over 3,000 yards through the air. When you have no consistent rushing attack and throw the ball nearly40 times a game, your quarterback will usually put up those type of numbers. Radcliff has proven that he can be a serviceable signal caller but hasn’t been able to put any wins together over his career.

Head coach Dan Enos is on the hot seat, at least within the Central fan base. You have to assume that the direction of the program under Enos will be looked at diligently. Under Enos, Central has gone 6-17 in his two seasons after going 19-6 with two bowl berths in the previous two campaigns.

A win over the Toledo Rockets in the season/home/conference finale would be a nice end to a dreadful year, but won’t mean much in the grand scheme of things.

Toledo comes into Kelly/Shorts Stadium with a 6-4 (5-1 MAC) mark on the year. In their previous two contests, Toledo has put up an astonishing 126 points and is averaging 41.8 points a game — good enough for the eighth best scoring offense in the nation.

There will be a lot of points scored in this contest as both defenses have proven very little and tend to give up a ridiculous number of points.

Toledo is still alive in the MAC West conference race and could land a spot in the MAC championship game. If Northern Illinois loses to Eastern Michigan this weekend and Toledo can top Central, the high-powered Rockets will find themselves in a great position to add a conference championship to the trophy case. The Rockets need an Eastern win just as badly as they need to beat Central, as Northern Illinois holds the tie-breaker after defeating Toledo 63-60 back on Nov. 1.

Central throws the ball with no regard for a rushing attack as Radcliff is throwing the ball a ridiculous 38 times a game. Toledo will not have to guess how Central will try to beat them and even if the Chippewas decide to run the ball, they have no clear No. 1 or even No. 2 feature back as four different players have over 50 carries on the season.

Toledo is an offensive juggernaut scoring over 40 points on five separate occasions this season. They do it with an extremely balanced attack as they average 272 passing yards to go along with 218 rushing yards. When you have a two-headed monster in the backfield, it makes things a lot easier for the rest of the offense.

Running backs Adonis Thomas and Morgan Williams carry the load for Toledo. Both respectively have carried the ball over 100 times this season, totaling 19 touchdowns and close to 1,200 yards on the ground. Thomas has been the feature back the past two weeks including a 30-carry, 216-yard and two touchdown performance against Western Michigan.

Do not be surprised if both teams combine for triple digit points in this contest. Toledo will be able to throw the ball and run the ball whenever they so choose against the mangled Central defense.

Toledo quarterback Austin Dantin is listed as probable after a concussion and is expected to play Friday. Radcliff will once again have to shoulder the load for Central in the season’s last tilt as the offense will most likely have to score some major points to give the Chippewas a chance.

These are two programs that are obviously heading in two very different directions. Toledo has accomplished a very impressive season as they look to make a bowl game and win the conference. Central is simply playing for “respect” this weekend. A win against an explosive team like Toledo would be solid momentum moving into next season with Enos or without.

Next season Toledo will lose its two feature backs Thomas and Williams but Dantin, the extremely efficient starting quarterback, will return.

Central faces a ton of uncertainty in the off-season and especially next season. A coaching change may not happen but there is no way that the situation  won’t be looked at after another disappointing and lackluster 2011. You can’t win with a “pro” style offense throwing the ball close to 40 times a game. It’s easier said than done, but if Central is going to bounce back at all they are going to need to run a balanced attack next season. Opposing defensive coordinators have focused on the Chippewa’s  passing game all year long, which has made it that much easier to stop.