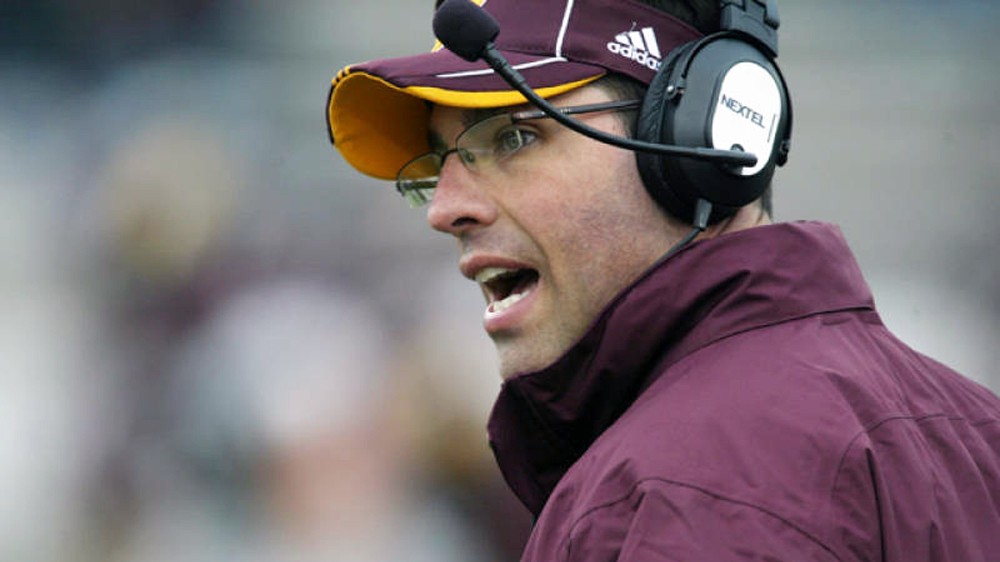 He came into the press conference beet red, with the mix of a chilled November night and another frustrating loss looming in his mind. His team again came out futile after the half, despite an inspired defense, and the Chippewas could not get into the end zone.

“They ran for 300 yards and we dropped like 12 passes. Any questions?”

Is Dan Enos the right man for Central Michigan? Many will say no. He came into a winning program and stripped away its identity. He wanted to stamp his own philosophy on the team, despite having many players equipped for a different offensive approach.

“Coaches coach, players play,” said junior quarterback Ryan Radcliff, who had a terrific game on Saturday. He threw for 362 yards and could have had a lot more if a few of his young receivers hung onto the ball. But that’s where coaching comes into question.

Over the past two years, Enos has tried to establish a pro-style offense. The attack is usually geared toward a strong running game, with a strong-armed and accurate passer under center. Against Ohio, Central ran a total of 18 times for 65 yards and Radcliff attempted 52 passes.

To be fair, the Chippewas were without three offensive linemen and no offense is going to be particularly strong with such a depleted roster. But 18 rushes, eight of which were in the first half? It’s hard keeping an opposing defense on its heels with such an imbalance.

This head coach, however, deserves one more year.

Central Michigan has three very talented freshmen on offense, running back Anthony Garland has been terrific at times this year. Receivers Titus Davis and Courtney Williams were particularly outstanding against the Bobcats, combining for 12 catches, 243 yards and three touchdowns. They also accounted for many of those drops that the head coach talked about.

We do not know what goes on behind closed doors, but on the field, Enos looks too disinterested. He got hot a couple of times at the officials – sometimes deservedly and sometimes not. Too many times, however, he stays the course with his hands behind his back.

The defense stuffed Ohio for a couple of big stops when the game was still within reach. The most I saw out of the former Michigan State assistant in terms of gratification was a pat on the chest.

When Davis dropped what would have been a 30-yard gain on third down, he slowly went to the bench. Visibly disappointed, he sat there for several minutes with his head drooped down. He received words of encouragement from his quarterback and from senior Cedric Fraser. Not one coach was to be seen.

Later, after the young receivers both dropped passes, receivers coach Taylor Stubblefield laid into the group. Yet Enos was still off on the sideline watching play continue.

I witnessed former head coach Butch Jones lay into players every day at practice. He shoved them around, pumped chests and cussed them out. During games, he was almost always saying (yelling) something when a group came off the field or briefly after on the sideline. It was confounding, but now understandable. It’s that kind of emotion that rallies players around you.

This is what Enos lacks, at least on game day.

I have talked with players the last couple of years who feel disconnected from him. Partially to blame is not being with the staff who recruited you, but it’s also not establishing and continuing the family atmosphere that Jones and Brian Kelly (their endings here is a different story for another day) established.

Senior linebacker Mike Petrucci made his return Saturday, after missing four games with injury. Despite the final score, he gave the defense a spark, finishing with 1o tackles. His energy was all over the field, frequently getting behind the line of scrimmage. It’s that kind of emotional lift that Enos needs to display more visibly both for his players and a broken fan base.

The announced attendance Saturday night was more than 12,000. For anyone there, you could tell that number was about 10,000 too high. Weekday games never bring huge crowds, but it was a pathetic showing.

While his sentiment is correct, his words might be ringing hollow. Players feed off the energy of a crowd and such a small amount is deeply disappointing, even for a three-win team.

Central Michigan was one the most powerful teams in the conference at the end of the last decade. Every Mid-American school goes through high and low phases – it’s the product of being a “stepping stone” conference. But this team has the resources to be better.

Enos needs to re-establish that winning culture and while many criticize the offense, it has looked decent this season. Radcliff looked much more comfortable against Ohio under center and before Thursday night, their previous losses came by seven points or less.

The foundation is there. Enos just needs to show us why he became a head coach here.