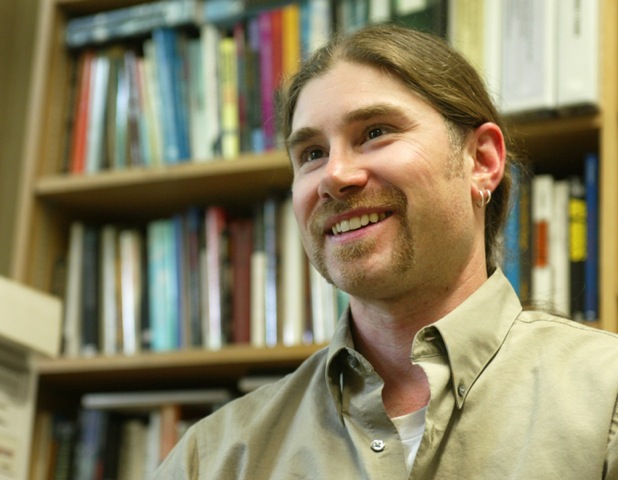 Dr. Jeffrey Weinstock’s office is nothing like his students would picture it. There are no chains swinging from the ceiling, no mysterious dripping noises, no ancient sinister looking books littering his desk. The overhead lights are on and yet his skin remains un-sizzled. He is found at his desk welcoming guests in for a seat with a genuine smile and, surprisingly, no sadistic undertone. It’s not at all what students would expect from their professor, an expert on Gothic literature and a vampire enthusiast.

And it wouldn’t seem like Weinstock is fully aware of the darkness he teaches. He’s a man in his forties with long brown wavy hair, brown eyes and softly spoken words. But as horror fiction teaches us, first impressions can be misleading. Weinstock has certainly done his research teaching what defines terror and why it fascinates the public. He explains that examining Gothic works reveal surprising reasons for audience captivation.

“One program about zombies doesn’t tell us much, but all of a sudden when we see a proliferation of movies about zombies that suggests that there’s something more interesting going on in the larger culture,” Weinstock said. “The zombie often embodies a fear of de-individualization or depersonalization.”

Perhaps horror provides more insight into cultural trends than the typical zombie apocalypse movie is given credit for. As masses of lifeless, nameless beings with gaping mouths shuffle through the streets, Weinstock suggests this indicates a moment in culture when people question the security of their individual identity. This analysis is not limited to zombies; it includes all monstrosities flooding the airwaves, like Weinstock’s favorite bloodsucking seducer.

“Vampires are the sexiest of monsters,” Weinstock said. “Recently, what’s interesting to me is the reversal of moral valence. Rather than being something to be feared, they’re something to aspire to be. They’re the protagonist.”

As floods of hormone ridden girls build up their anticipation for the upcoming installment of the Twilight saga, the sex appeal of a vampire’s bite is undeniable. However, audience horror fascinations are not limited to the typical bumps in the night, but rather those entirely without appearance. In his most recent project called “Invisible Monsters,” Weinstock evaluates the most current trend of fear: fear without definition. The pattern, apparent with movies like Paranormal Activity and The Happening, has spurred from the current war and struggles with no easily identifiable villain. Evildoers like terrorists can blend into a crowd and an enemy like global warming cannot be directly attacked. According to Weinstock, this is something currently sending shivers down our cultural spine.

His passion for Gothic studies and its place in the cultural arena were not always his career focus. Weinstock’s office is nothing like he had originally pictured it either. He began his higher education seeking a Pre-Med degree at the University of Pennsylvania. He thumbed the goliath books and understood the material, took the tests and made the grade but realized that it wasn’t making him happy.

“I reached a point where I was tired of taking classes I just had to get through,” Weinstock said. “I wanted to take courses that I enjoyed.”

After his junior-year epiphany, Weinstock earned a bachelor’s degree in English. Through his pursuit of a master’s in American Literature and doctorate in Interdisciplinary Humanities from George Washington University, Weinstock was able to fine tune and perfect his unraveling passions. After coming to teach at Central Michigan University, he has continued to work with a variety of research emphases. He contributes to scholarly publications, edits fictional works and has published 13 books in 10 years. Weinstock has received numerous honors since being inducted as a Chippewa, including two teaching awards and Provost’s Award for Outstanding Research and Creative Endeavor.

To illustrate the recognition for his hard work, he snags a small cardboard box from his desk and gently opens it. Dangling from his finger is a silver key ring with “10 years of service” ingrained upon it. It is complete with a “Made in China” sticker on its backside. He unfolds an unsigned note from President George Ross’ desk with “Dr. Jeffrey Weinstock” and his years of service inserted in the appropriate places, monotonously expressing gratitude for decades of dedication. It’s an example of the lack of genuine recognition that led to his disillusionment with the CMU administration.

Highly involved in this semester’s Faculty Association protests, Weinstock provides anything but a gentle, indifferent prospective.

“I’ve been so viscerally disgusted by the whole contract situation here at CMU that I and so many of my colleagues are looking to go other places,” Weinstock said. While the faculty contracts remain in limbo and negotiations are yet to be reached, it seems that, like Weinstock’s Gothic literature, this battle will not come with a fairytale ending.

“What the future will look like is unclear, there is so much frustration and animosity between faculty and administration,” Weinstock said. “I don’t think that all of that is going to magically dissipate with a contract. You can only insult and belittle people for so long. I don’t know that the administration really understand just how angry the faculty are with them.”

Perhaps this story too, holds a deeper meaning begging for interpretation—something symbolic that could open eyes to a larger cultural trend. But in the process of filling out applications for positions elsewhere, Weinstock is tired of the analyzing and bickering. He is left at his desk surrounded by stacks of books with yellowing pages, an unsigned note and the dusty smell of Anspach filling the room. While his departure will be a loss for the English Department, it’s clear that wherever Weinstock migrates, his spine-chilling studies will surely follow.