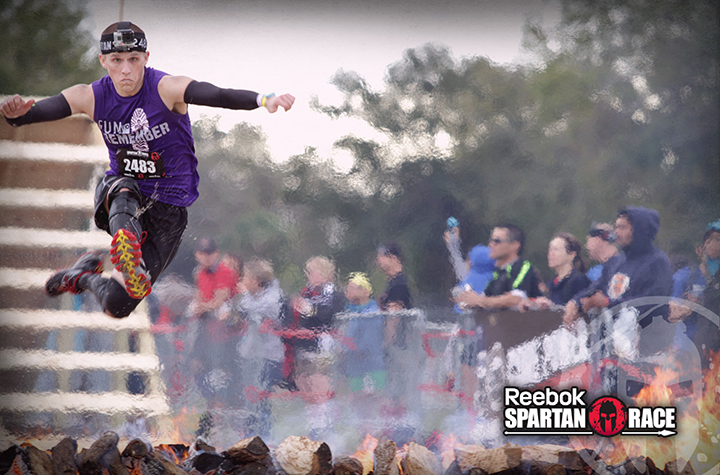 One hundred races. Fifty-two weeks. One goal: $1 million. This is the motto for Brad Kloha’s organization Run to Remember.

Kloha is currently the division administrator of Enrollment and Student Services at Central Michigan University and since June 15, 2013, he has been busy attempting to reach his goal of 100 races, in order to raise money for the Alzheimer’s Association.

There are two aspects which motivated Kloha to take on this challenge.

“The first motivation was the cause behind it,” Kloha said. “Watching my great grandmother and grandmother battle Alzheimer’s disease, and the helplessness I felt and knowing there was no cure and there was nothing that my family or doctors or I could do to slow the effects, wasn’t a feeling that I liked.”

Kloha said his second motivation was his love and desire to compete in more obstacle races. He wanted to find a way to use his love for obstacle races and also make them benefit a good cause.

“I really don’t like to run,” Kloha said. “Basic running is not fun for me at all.”

Kloha participated in his first obstacle race in 2010. It was called the “Warrior Dash,” which took place in Illinois. After that, he ran more of these in 2011 with friends and when 2012 rolled around, he ended up completing 13 races.

“Originally I only wanted to do obstacle races,” Kloha said. “But I knew to reach the goal of the number of races I wanted to do, I had to include some traditional road races.”

Before his first race on June 15, 2012, Kloha did a wide variety of training exercises. He could be found in the parks around Mount Pleasant using the monkey bars and climbing the fences of the baseball fields, to train for the unique obstacles he would encounter. He could also be seen dragging a cinder block attached to a chain that his family named “Cindy.”

“I did a lot of different strength training and I also trained in upping my mileage,” Kloha said. “I would go running and instead of going around the picnic tables, I would climb on top of them.”

Kloha used his experience with these types of races to try to mimic the obstacles to the best of his ability. He said he did not anticipate the toll participating in all these races would take on his body, which was one of his biggest challenges with the project.

“In the first month, I lost 20 pounds and my body fat dropped below two percent,” Kloha said.

He ended up in the emergency room where he found out he had a Norovirus breakout and severe dehydration. Kloha quickly realized he had to adjust his nutrition and take in more calories in order to be able to finish the 100 races.

“The biggest question a lot of people had going into this was how my body was going to react,” Kloha said.

He explained that because the races are all close to each other and there are so many, it’s challenging to recover because he does not have much time to rest. However, regardless of the challenging courses and some of the struggles that come with them, Kloha’s family have always been there to support him and cheer him on.

“My family gave me the reassurance that I had support, which allowed me to keep going even when I felt like giving up,” Kloha said.

At every race he can be seen wearing a sleeve on his arm with a picture of his grandma, which was taken on her last birthday before she passed away. He said that it is something that keeps him motivated and reminds him why he is participating in all of the races.

When Kloha first started his organization, his main goal was to raise $1 million. He quickly came to realize exactly how much money that was, but with it he realized the deeper motivation he had.

“I quickly realized that raising the million dollars was something I couldn’t control,” Kloha said.

Kloha realized he could control the people he talked to and the awareness he spread, while participating in the races. While at the races he did not expect people to be so interested and also tell him stories.

“People have come up to me and talked about how what I’m doing has inspired them to do something similar to a cause that they care about,” Kloha said.

Betty O’Neill, the event manager for the Alzheimer’s Association Greater Michigan Chapter for the Central Michigan Region, said the organization is lucky to have him. She met Kloha when he first started Run To Remember. She said that he brings great awareness and his campaign is wonderful.

“When someone decides to stand up and fight, it makes a huge difference,” O’Neill said.

All the money that is donated goes straight to the Alzheimer’s  Association. According to O’Neill, all of the funds raised through Run to Remember will be used to help around 24,000 patients through programs and different services in the Central Michigan region. All of the flights, drives, hotels, and any other expenses regarding the races are paid for out of Kloha’s pocket.

“We’re happy to be partners with Brad,” O’Neill said. “We could not do it without our volunteers.”

He said that it’s hard to distinguish who his biggest supporters are because he has so many, but his family has been incredibly supportive as they drive him to races, and stand out in the cold to cheer him on.

Kloha said he believes his grandma would be proud if she could see him complete the 100 races for a good cause.

“My grandma was extremely selfless, so part of me sometimes feels bad when I tell her story because she didn’t like the attention on her,” Kloha said. “I have to hope and think that she would be extremely proud because I’m doing this for the millions of families that are going now.”

Kloha’s 100th race is on June 14 and will take place in Mount Pleasant. The race is specifically for Run to Remember and will bring a sense of pride and accomplishment to Kloha.

“Part of me thinks that I won’t even realize it’s done and over with,” Kloha said. “I think the biggest thing is the following weekend, I won’t know what to do with my life.”

Kloha said he is not entirely sure what will happen in the future with Run to Remember, but hopes to have an annual race each year to bring more awareness to the issue.

“It was an incredible year of seeing so many great places and meeting some amazing places,” Kloha said.

To donate to the organization, people can go to Kloha’s website.