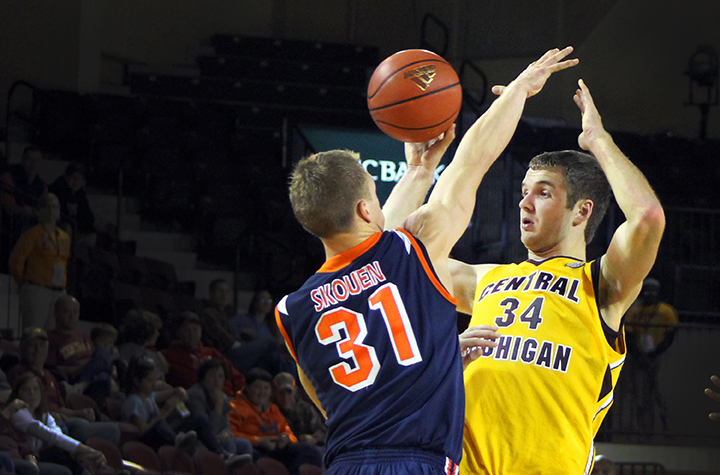 “I knew if I was going to be out there I had to get my legs back under me,” Simons said. “Once overtime hit it didn’t really matter, I was going to play anyways.”

For the past eight games, the Chippewas have been close to their first MAC win but kept falling short. After giving up an 18-point lead against Ohio and a late lead against Western after an almost remarkable comeback, Head Coach Keno Davis said it was nice to be able to get a win.

“To be able to break a losing streak, to be able to have five more minutes of basketball, I credit our guys,” Davis said.

Davis said Simons did a little bit of everything in Wednesday night’s win.

“He’s one of those players that I think sometimes people unfairly ask too much of him,” Davis said. “The energy that he puts forward through a game defensively of trying to front the post and keeping the ball out of the inside, trying to rebound for us when we’re lacking in size, and then we ask him to knock down clutch shots, which is the best part of his game.”

Davis said he thinks Simons is becoming one of those players that can make an impact on the game offensively and defensively.

“He’s starting to reach that point where he is feeling more comfortable and understands that he’s got the ability to play on both sides of the court,” Davis said.

Central Michigan will play another home game against Buffalo Saturday, Feb. 8 at 7 p.m. at McGurik Arena.