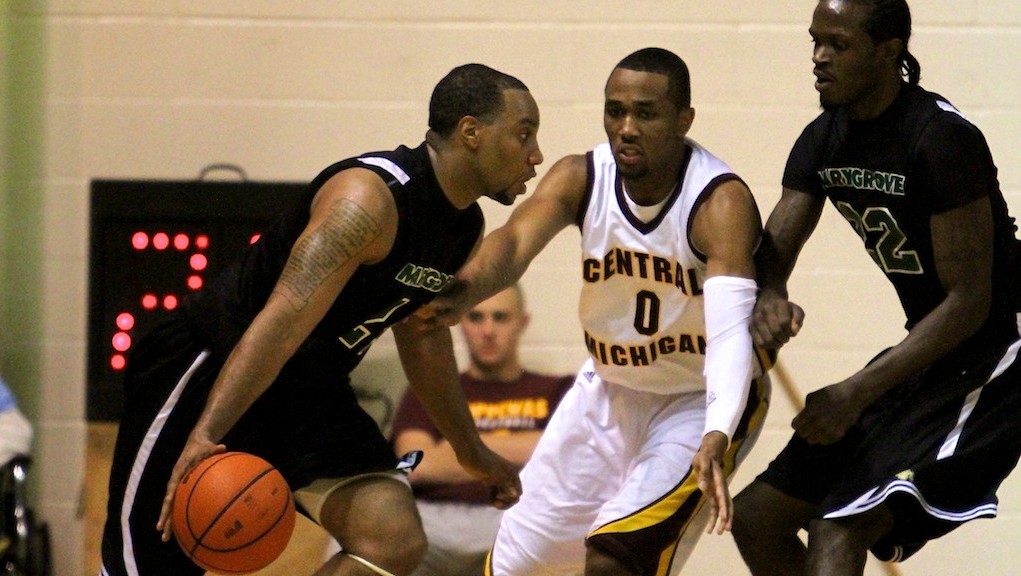 As the lights flickered on in McGuirk Arena, so did the journey that would be the 2011-12 season for Trey Zeigler and the rest of the Chippewa Men’s basketball team.

The Nov. 2 game against Marygrove was not only the public’s first look at the team, but also the first step in Central’s quest to become relevant in the Mid-American Conference for the first time since 2009. After a dismal 10-21 season, McGuirk Arena was now filled with hope and excitement about the upcoming campaign.

From the tip-off, it was easy to see that the Chips had the upper hand on the Mustangs. Shortly after jumping out to a 7-2 lead, Central would go on a 15-point run and would finish with 46 in the first half.

The surprising freshman guard Austin Keel led the team with 16 points and the rest of the offense caught fire shooting 60 percent from the floor. The defense was led by a few key blocks from forward Andre Coimbra and held Marygrove to only 22 points in the first half. The second half would be just as lopsided as the Chippewas blew past the Mustangs 93-36.

As great of win this was for the Chips, it was only Marygrove.

Fans cannot expect this type of play against an experienced Western or Ball State team. Even as lopsided as the game turned out to be, there was still much to learn from it.

The Chipewas’ Offense has arrived

Ziegler didn’t have his hands on the ball all night like he usually does. The freshman Austin McBroom took the ball out of the back court for the majority of the night. McBroom distributed the ball with a certain confidence and ease.

Olivier Mbaigoto, a new addition to the starting lineup, was a solid presence in the post. Look for the 6-foot-7 junior to be a key component of the offense as he will be the go-to guy down low. His counterpart, Coimbra, also looked to have more confidence. Early on it looks as if Zeigler and McBroom will have plenty of chances to get it to the big men.

Central had 20 points off of fast break opportunities. Getting easy points like this only makes the rest of the game easier. The Chips were able to shut down their opponents and put them on their heels. This will be essential to Central if they want to stay competitive in the future.

The Defense has improved, but still needs work

The Chippewa defense held Marygrove to 36 points. Yes, it is a very impressive achievement—but it was how the points were scored that should have head coach Ernie Zeigler shaking his head.

Even though the Chips have two great post players, they were easily lured away from the post allowing Mustang players to come in and collect easy buckets. Better teams will only be able to exploit this even more and give the Chips the same issues they had last year.

CMU also gave up a lot of uncontested 3-point shots. The Marygrove offense seemed to put the Chippewa defense to sleep with quick passing, then they would rocket a ball to the outside and get an easy three. The outside players need to close in on their man quickly so the shot isn’t there.

The Bench is deep

After going up by 20, there was a good opportunity to assess Central’s bench. Keel was the star of the night—expect to see similar outings whenever he is shifted into the guard position. He allows for a feasible replacement for Zeigler when he needs to rest.

Forward Colin Voss is no stranger to playing good when he is called upon: His 10-point night against Ohio last season was no fluke as he looked strong and confident wherever he was on the court. Anytime Voss is needed this season, look for an explosive performance from the young sophomore.

Finis Craddock and John Morris both finished with double digits in this game. They will be able to fill in for the starters quite easily this winter and should receive plenty of playing time.

Overall, Central’s first outing wasn’t bad by any means. As like any win, a team still must look for areas to improve on. For this year’s team, it looks as if the defense will once again be the Achilles heel. The offense will be electric and there is no doubt Zeigler will have a monster year.

In a time where hope springs eternal, the Central Michigan Men’s basketball team is still looking for answers. Will they return to their glory?

Only time will tell.