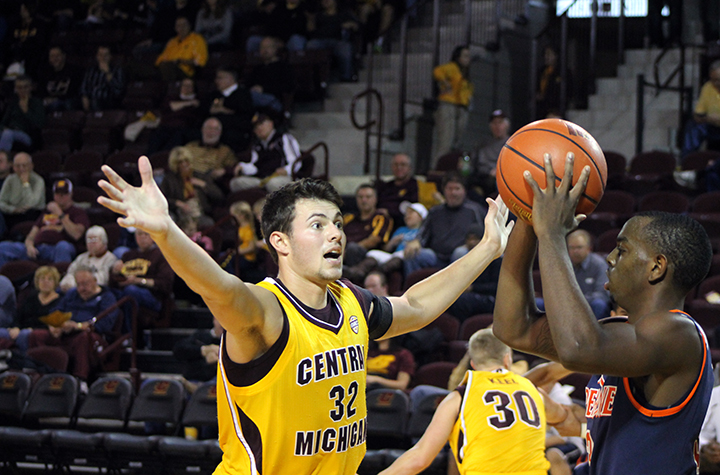 Mental mistakes and a lack of effort are keeping Central Michigan from getting wins early this season. Central Michigan (1-2) did not put forth enough effort against Pepperdine (3-0) and ended up falling short 88-71 on Saturday, Nov. 16 at McGuirk Arena.

Sophomore Blake Hibbitts did his best to get Central Michigan the win with 12 points, hitting all four of his 3-point attempts.

“I was just trying to shoot when I was open,” Hibbitts said. “I had a couple of good looks and fortunately they went down. I’ve been struggling lately so it’s nice to knock a couple down.”

The 6’7” forward from Hudsonville, Mich. has been a big part of the rotation through Central’s first three games. Central’s head coach Keno Davis pointed to Hibbitts as being one of many unselfish players on the team.

“He goes 4-for-4 from three so he had a hot hand but that doesn’t mean he was trying to step back and shoot shots that would have lowered his percentage,” Davis said. “He’s just a small part of how unselfish the team is.”

Davis remains confident about the players on his team and knows they’ll improve. He’s not surprised with how Hibbitts has been shooting the ball either.

“He’s got some aches and pains like everybody else does,” Davis said. “And sometimes (as) shooters that can throw you off, but to be able to have a night like that (against Pepperdine) will you get that confidence back.”

Davis said the team tried to do different things defensively, but it didn’t work out. Pepperdine blocked 10 of Central’s shots while the Chippewas only had two. Davis said his team didn’t adapt as well as they’d like and they will have to get better at adjusting shots moving forward.

“We need to be able to take one part of the game of the teams that we play,” Davis said. “Take away the outside. Take away the inside, not just give them both options.”

‘“We had a lot of mental mistakes in the second half on rotations and some bad closeouts that led to some drives and some easy post touches for them,” Hibbitts said. “They kept knocking down a lot of threes too, stuff we didn’t clean up.”

Davis also pointed to Central outrebounding Pepperdine as something to take away from the loss. Improving the team’s rebounding numbers has been a priority after Central Michigan was outrebounded against Bradley on Nov. 12, 50-28.

“All year that’s been one of our main focuses,” Hibbitts said. “We know that we’re a small team so we have to outwork our opponents and rebounding is the key to winning the game. We know we have to be equal or better on the boards to give ourselves a chance.”

Central Michigan’s next game is against Austin Peay at 7 p.m. Thursday, Nov 21, at McGuirk Arena.