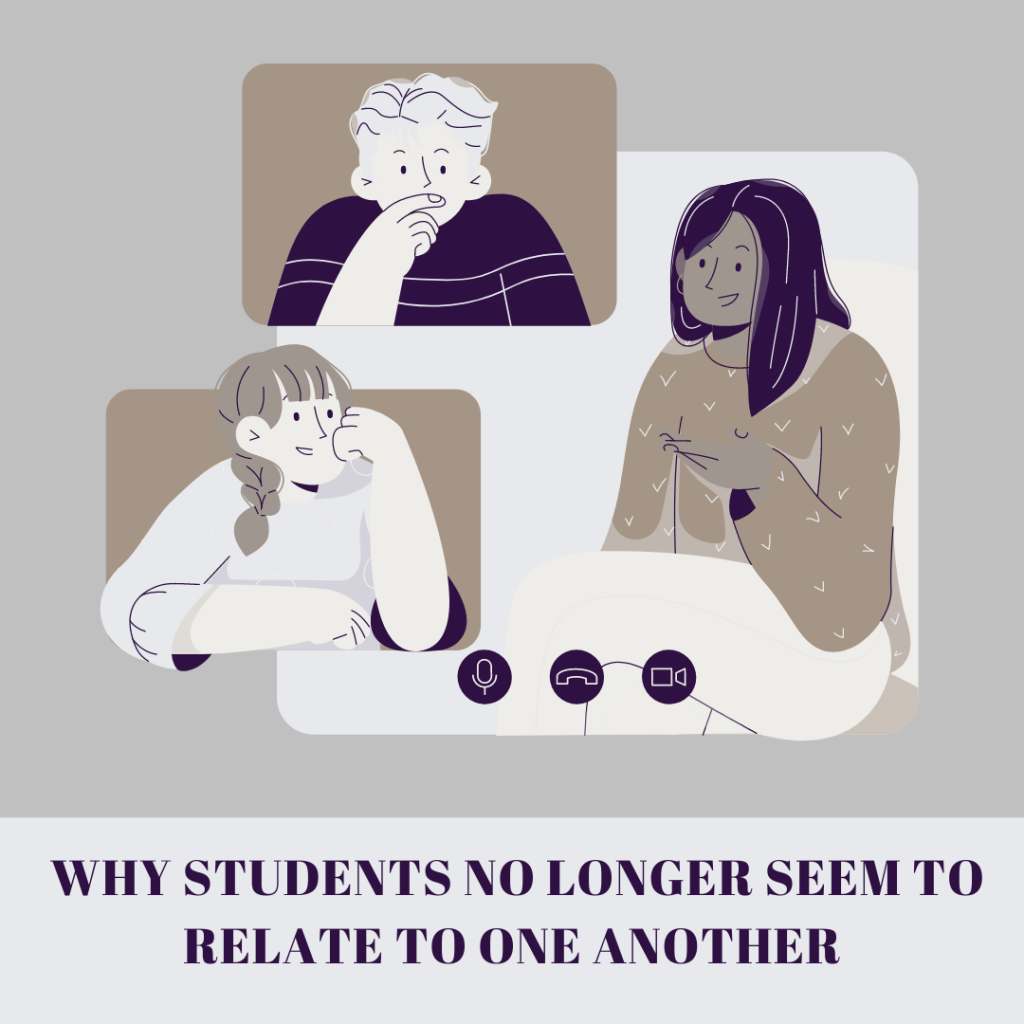 Waiting for social work class to start, the room is quiet except for the ambient sound from the headphones of other students. Senior Jacqueline Finch scrolls through her phone just as every other student around her in class does.

Seclusion due to Covid-19 made an impact on every avenue of life, but the crumbling social skills of students in college allow for feelings of isolation to resurface even when they are not alone.

During her freshman and sophomore year, students would be friendly and interact in a way where they were building relationships with classmates, Finch said. Sitting in classes now she can feel the awkwardness and social anxiety as the students wait for the professor to begin class.

Students became comfortable communicating through screens via Webex with idea that they can get credit for typing one sentence for participation and being silent for the rest of class. As classes begin back to being on-campus, professors expect lively class discussions and are met with silent stares.

“People don’t really know how to interact like they used to,” Finch said. “It definitely has kind of created a barrier for a lot of students.”

Pairing up students for group projects should build on those interpersonal communication skills yet coming back to campus this semester they now want back into their comfort zone as quickly as they can.

Senior Dallas Mora’s experience in class showed what is missing from campus culture as more people come back to campus.

The lack of eye contact, communication, and overall interest in being in the present moment was obvious as his partner for a class project continuously put more effort into checking their phone than into the project Mora said.

Combating this social fear, Mora had forced himself to go to classes in-person last spring to not lose his social skills.

Beyond just going to classes, students can flex their social skills by showing up to different registered student organization meeting. Going to meetings and being around other student can help foster safe environments for those with social anxiety to begin regaining the ability to talk with others.

Whether it is talking to others before class or going to a meeting for an RSO, students can begin to let down their walls of isolation and let each other back in. The conversations do not have to be deeply personal, but having any conversation is better than none.

“Don’t overthink it, you don’t have to have the perfect response,” senior Paige Zundel said. “Just lead with empathy, even if it feels weird because social interaction is new again.”