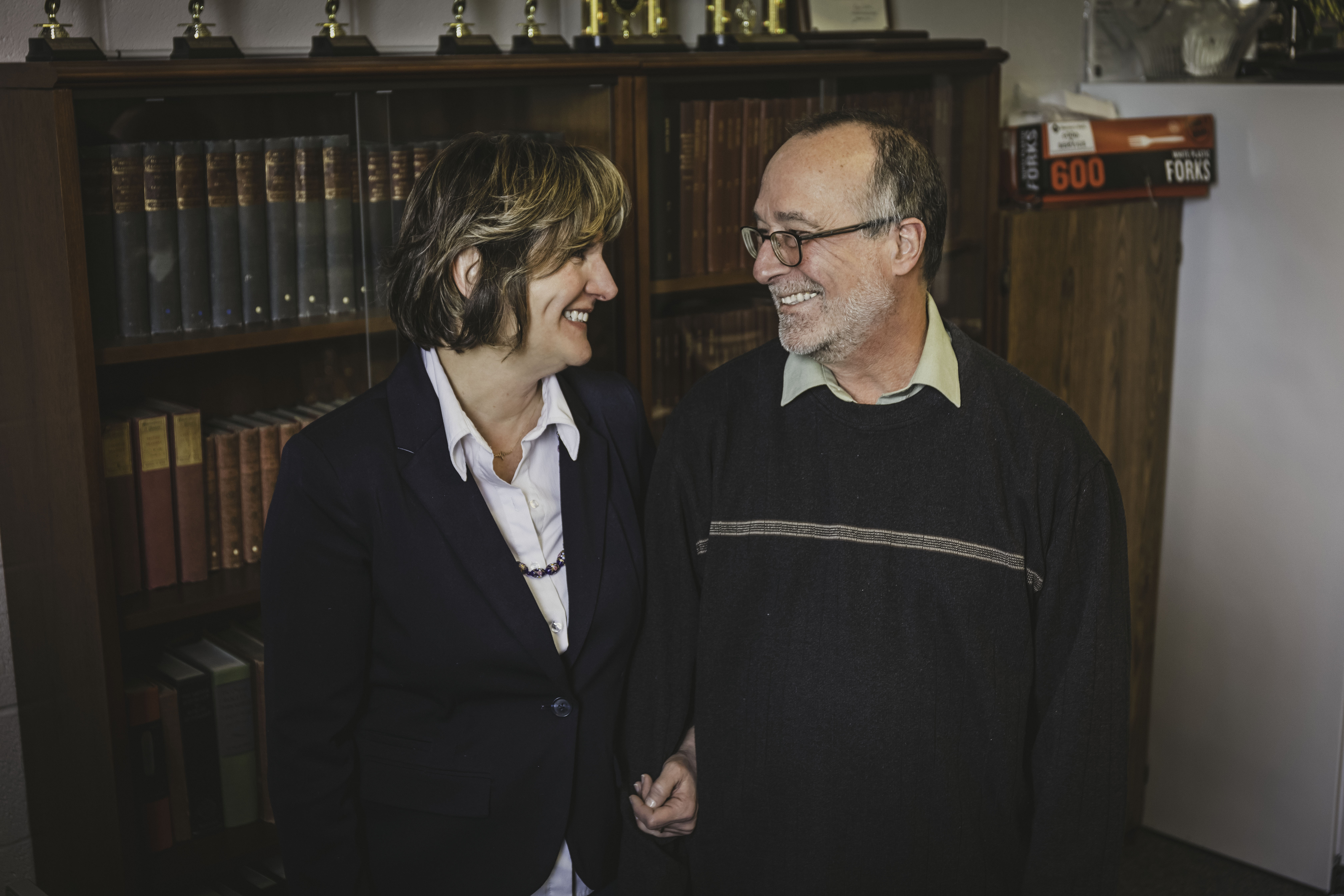 Story and photos by Aubry Healy.

Central Michigan University Communication professors Wendy and Michael Papa met in a meeting room on the third floor of Moore Hall on Aug. 16, 1980.

Wendy Papa, an Indianapolis native, and Michael Papa, from the Bronx, were drawn to Central Michigan University to pursue graduate degrees in Communication.

“It was the first day of COM 101 teacher training workshop. We were both graduate students and taught COM 101— the teaching trainman workshop occurred in this room,” Wendy Papa said. “He [Michael] had this really thick New York accent and he had to teach himself to lose it because the students couldn’t understand him.”

Aside from being caring spouses to one another for 37 years, the Papa’s have a significant connection to their alma mater as they are both Communication professors at CMU.

Just two years after meeting in Moore Hall as graduate students, Wendy and Michael tied the knot on Jan. 30, 1982. Their lives lead them away from CMU for a while. Michael Papa received his PhD from Temple University in Philadelphia and Wendy received her PhD from Ohio University. The pair taught at Ohio University for 13 years.

The couple raised their two children, son Andrew Papa and daughter Samantha Papa, while teaching together at three different universities. Their children were 10 and 15 years old when they decided to move back to Mount Pleasant.

Michael Papa discovered a job opening in CMU’s Department of Journalism and encouraged Wendy Papa to apply for it. “We were in our mid 40’s and at that point in our career were thinking, ‘where do both want to finish our careers?’ and we thought here,” he said. “We always loved Michigan and have been connected to this university.”

When their kids asked why they were moving to Mount Pleasant, Wendy Papa said, “We’re going home.”

Wendy Papa took a job in the CMU Department of Communication in 2002 and Michael Papa took a one-year position at Michigan State University. During that same year, a job opened at CMU as chairperson of the Department of Journalism. He took the job in 2003 and the couple have been back at CMU ever since.

Although both obtained PhD’s in Communication, they have pursued different avenues in the field. Michael Papa has conducted international research and traveled to many countries such as India, Bangladesh, Sweden, Thailand, Sudan and Uganda.

Both of their children received their Bachelor’s degrees from their parent’s alma mater. “They just knew they wanted to be here,” Wendy Papa said. “They were professor’s kids and were used to going to events and knowing all the faculty.”

Andrew Papa studied Broadcast and Cinematic Arts and Theater and Samantha Papa studied Communication and went on to get a second Bachelor’s degree in nursing. Their son is now a professor at the University of Detroit Mercy and their  daughter is a nurse at Beaumont Hospital in Troy, Mich.

The couple enjoy spending every day with the university that brought them together. Thirty-seven years later, three universities and two kids— the Papas are still footsteps away from the room that started it all on the third floor of Moore Hall in 1980.