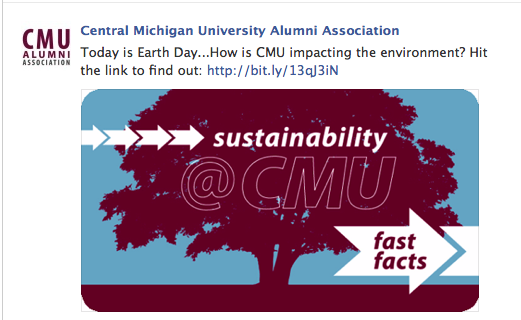 Several Central Michigan University students are questioning their school’s devotion to sustainability on campus after learning that many of its investments are in companies they consider to be damaging to the environment.

Founders of Divest CMU, who are involved in groups such as the Student Environmental Alliance and Take Back The Tap, investigated where CMU invests its money and were not pleased with the findings.

The companies they were disappointed the university invests with include Exxon Mobil, Chevron Corporation and National Oilwell Varco Inc., among several others.

“It was started by a group of concerned students that realized this was a powerful technique CMU could use to show its support for its students’ futures,” he said. “It’s actually becoming a national campaign right now…we were a small group of students that realized we could be part of a bigger picture by asking CMU to divest from these harmful companies and instead reinvest in more socially responsible companies.”

According to the CMU endowment fund performance summary for 2012, the current market value for the fund is $81,586,980. Where does that money go?

“Far and away most of the money is for scholarships,” said Barrie Wilkes, Associate Vice President of  Financial Services.

Despite this large reinvestment back into the student population, where that money comes from is troubling to some of those same students, especially Gleichman and Mariah Urueta, co-founders of Divest CMU.

“Some of the companies that I can think of offhand that are doing the most destruction that CMU is investing in are companies like Exxon, Chevron, Schemberger, EOG and National Oil Well Varco,” Gleichman said.  “These are companies that either themselves or by affiliation have been associated with some of the huge oil spills in the past few years.”

According to David Burdette, Vice President of Financial and Administrative Services, CMU is more concerned with the rate of return from its investments than in the potentially cloudy morality behind them. He said that there will always be differing opinions about certain corporate business practices, and that when looking at it in investment terms, it’s easier to look at profit.

Burdette, who recently retired at the graduation commencement Saturday, was charged by the Board of Trustees as the person responsible for all investments at CMU, and was assisted by an investment committee and an outside consulting firm.

“That group (the investment committee) will meet three times a year and they give advice on trends in the market, opportunities in the market and what they see from their perspective, and then we do have this outside consultant, Fund Evaluation Group, and they really give us advice on where, ultimately, our funds should be invested,” he said.

With these recommendations from the investment committee (a subgroup of CMU’s Development Board), and SEG, CMU then makes the final decision of where to invest its money. The 12-member investment committee is chaired by August John Hurt III, who referred to Wilkes when asked for comment.

“In the endowment fund, we’re really restricted as to what type of investments we can make, but we do look for what we call a diversification and a tenant of investment is the more you diversify it, you lower the risk,” Burdette said. “The lower the risk, potentially, the higher the return. “

“What our consultant does for us is they help us identify the money manager,” he said. “It’s actually those individual money managers who are making those selections of the stocks. If you have an index fund, you don’t have a choice of what to buy. That index changes annually.”

When asked if CMU has any requirements about environmentally friendly investments, he said, “No, we don’t.”

“All in the market, they understand these issues, but they all kind of came to the same conclusion (that) what’s important to one person may not be important to another and the reason for the investment committee and for us to have an investment policy is to the extent we can to maximize return with as few restraints other than what we’re bound to by the investment policy,” Burdette said. “We wouldn’t be able to offer as much scholarships to students as we can right now.”

Despite his personal feelings about CMU’s investment decisions, Lokos said he understands why certain companies are chosen.

“These companies are generally considered safe and profitable amongst the stock market and that is why they are popular companies to invest in; because big oil and big coal control the energy market and energy is necessary for any country to thrive so therefore they will generally be a profitable investment in our time,” he said.

What would it take to go green with our investments?

“We would be asking that money manager to remove the endowments in stocks that are environmentally irresponsible such as big oil and big coal and instead asking (them) to reinvest the money into companies that are more social responsible, such as wind power, solar power, etc.,” Lokos said.

According to an April 2013 article about divestment from Bloomberg,  there is no sure way to determine whether or not sustainable investing will produce good returns.

The article stated, “Of the four alternative energy investments that Yale University featured in its 2009 investment report, at least two are foundering after natural gas prices fell. The solar panel-making unit of Suntech Power Holdings Co., based in Jiangsu, China, went bankrupt while Mascoma Corp., a biofuel company in Lebanon, New Hampshire, failed to go public.”

Director of the Great Lakes Institute for Sustainable Systems at CMU Thomas Rohrer said just about every mutual fund will have a mix of corporations in its portfolio with business that has some adverse impact on human health or the environment.

“It could be fossil fuels, or tobacco, or fast foods, or mining or paper mills and so on,” he said. “Virtually everything we do has some adverse impact on the planet.  It would be difficult, if not impossible, to have an investment portfolio of companies that did not involve some of these risks.”

In addition to his administrative role in finance, Burdette heads the sustainability committee at CMU.

“I’m very aware of the green issues,” he said. “Now, when I put my chief financial officer hat on, among the things I’m responsible for is monitoring and seeing how our investments are done. I take the same prudent approach. I think one of my responsibilities is again, to the extent we can within the investment policy, to garner as good a return as we can, both protecting the principle of the gift and maximizing the return to the students for funds available for scholarships. So it is a bimodal world and I understand that.”

When asked if he ever felt pulled in two directions, Burdette said no, that he was able to compartmentalize.

According to an Earth Day post on the university’s website, CMU has promoted its sustainability through the installation of solar panels on the Education and Human Services Building and LED lights, among others, as well as received its first LEED certification from the United States Green Building Council in October 2012 for the Health Professions Building for the College of Medicine.

In the Bloomberg article, environmental writer Bill McKibben said, “All these campuses have been boasting about how green they are. If you’re going to green the dining hall, you need to green the endowment too.”

What changes can CMU make in the immediate future?

Former Student Government Association President Justin Gawronski approached Burdette at the beginning of the semester regarding CMU’s investments from a social consciousness point of view.

“He wanted to know would we or would we not be open to at least examining the question,” Burdette said. “Timing was perfect; I was headed to an investment committee meeting within the next couple weeks.”

He said after a discussion with the investment committee, they were not, at that point, interested in taking a social stand.

Current SGA President Marie Reimers ran her campaign on a divestment platform and said she is against companies that destroy the earth through fossil fuel production.

“We need to have a conversation about what divestment means and what reinvesting in socially responsible companies means too. The only way we’re going to get the university to divest is to convince them that this is also going to be worth their money and their time,” she said. “I feel like we can do this in the next couple years (start to divest). And maybe not divest from all companies, but lessen our impact.”

Reimers said a concrete plan of what is being divested from and reinvested in is needed. Just to pull all money out of fossil fuels isn’t realistically going to happen, she said.

“I think our next step is to spread the word about divestment,” Lokos said. “A lot of students won’t know what it (is) or what it really entails and telling students first what divestment is will show whether the student body will support a decision.”

SEG Consulting Firm did not respond to emails for this story.