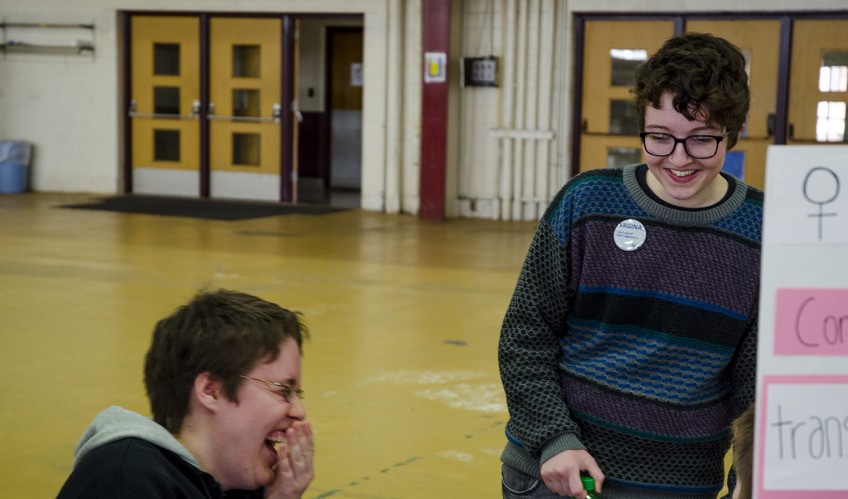 Kai Niezgoda will happily explain their preferred pronouns  to you.  They will ask that you address them with the singular form of “they, them and their,” though if your hard-wired grammar lessons from school don’t allow you to say “they is” without suffering an aneurism, he is also comfortable with more traditional male pronouns.

“A lot of people see gender as a really binary thing; you’re either male or female, you’re either a boy or a girl,” they said.  “There are a variety of intersex conditions in between.”

Niezgoda, a Royal Oak freshman double majoring in journalism and women’s studies, identifies as transmasculine.  When they came to CMU last fall, they were looking forward to finding a community of other trans* people after spending much of high school without one.

They thought they would find this in the form of Transcend, a national organization with local chapters built around providing a community for both people who identify as trans* as well as advocates.  However, though it was still listed as a Registered Student Organization, Transcend was nowhere to be found when Niezgoda went looking for it.

“I was disappointed about that, because in high school, I for one had a pretty hard time coming to terms with my gender identity and I didn’t know anyone else who identified as transgender, and I was really looking forward to that opportunity,” Kai said.

Luckily, Kai met someone from the trans* community without the help of Transcend.  Kay Mick, a Clarkston freshman, saw Kai wearing a shirt that said “Legalize Trans*” during the first day of their Journalism 102 class last fall.

According to both of them, Kay came up to them after the class and said, “So, what are your preferred pronouns?”

From then on the two were fast friends, and together they rebuilt and reorganized the CMU chapter of Transcend, with Kay as president and Kai as vice president.

According to Kai, the group has 10 regular members, and they meet weekly to discuss issues they’ve faced as well as more casual conversation.  Kai says that many of their meetings are closed to the public because not all of the members are out as trans*.

However, the group is working on building more a relationship with potential allies in the Mount Pleasant community.  Kay said that they and another member of the E-board suggested having meetings that weren’t closed to just Transcend members.

“Next year we are having meetings once a month that allies can come to and we will inform them more (about what’s going on in the trans* community),” Mick said.

That information will range from everything to discussing “preferred pronouns” to talking about issues involving discrimination or harassment.  Niezgoda said they plan to raise awareness about gender neutral facilities, and try to get more of them at CMU.

This issue even surfaced during the Sextival.  Before transitioning from the Student Government Association booth to the Transcend one, Niezgoda decided to take a break.

“I’ll be right back, I have to walk over to the U.C. (CMU’s Bovee University Center),” they said to Mick.  “There’s no gender neutral bathroom in here.”

Niezgoda said this with such casualness that their ease with dealing with it became apparent.  What also became apparent after they returned, though, was the frustration they felt when people at the Sextival asked them if what they were doing was similar to dressing in drag.

“It’s kind of funny to us, because we know the difference between drag, which is like a performance or a job,” they said.  “For us, it’s not a game, it’s not a performance, it’s our lives.”

Both Niezgoda and Mick found humor in questions comparing them to Sabin, a drag queen who visits CMU once a semester and hosts a drag show.  It’s comparisons like that that they both hope Transcend can help to dispel once the organization has more of a presence on campus.